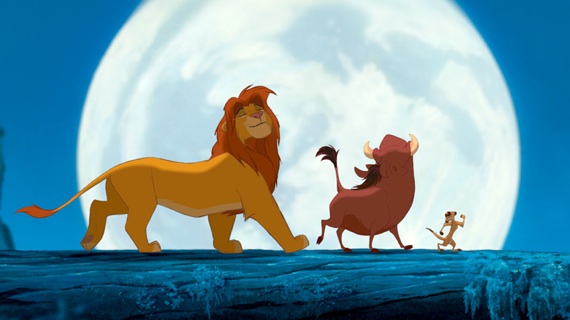 Last Saturday, on the penultimate day of a two-week visit to my parents' house in Florida, my sister and I jumped into her car, drove to the local cinema, and paid to see The Lion King in 3D. It was a pretty special moment for the two of us, since it was the first time that either of us had seen the film on the big screen since 1994 (though it was by no means the first time that we had seen it since then, since we watched it quite literally hundreds of times on VHS in the '90s) and there's always something indefinably beautiful about seeing a film you love on the big screen, especially when it's a version that people who love the film as much as you have clearly spent a great deal of time remastering it.

I was going to write a review of the film, but it seems kind of pointless, since I doubt there can be many people old enough to read these words who haven't already seen The Lion King. Even if you haven't, you probably know all the basics; it's Hamlet, but with lions and a happy ending. There is no real reason to review the aspects of the film that had already passed into the cultural lexicon 17 years ago.

However, The Lion King returns with one little addendum. Well, a whole extra dimension, really, because it's 2011, and everything has to be 3D now. It's also the aspect of the film that has got the most play amongst the box office analysis folk that I tend to hang around with these days. (You should see the wine receptions we have! Simply marvelous.) So, rather than discuss the film (which is wonderful, and remains one of the best animated films ever made) let's talk about the 3D.

The first thing that needs to be pointed out is that The Lion King 3D does not use Negative Parallax, so it doesn't go for the overtly gimmicky route. Rafiki doesn't hold Simba out OVER the audience, the Hyenas don't force their heads through smoke that is billowing IN FRONT of the faces of the audience members, and Scar doesn't make his ultimately misguided final attack on Simba by stretching out his claws and leaping AT the people sat in row H. It uses Positive Parallax, so the expanses of the Serengeti stretch out into the distance, hordes of various animals run around each other, and there is a nice layered effect to animation. Truly, if you ever wished to relive the formative trauma of Mufasa's death (SPOILER!) in 3D, this is the best you could possibly hoped for, you sad, twisted little person.

Whilst Positive Parallax is the more aesthetically pleasing form (not to mention the one that is best for your health, since it's less likely to induce motion sickness if used correctly, whilst Negative Parallax can still be headache inducing even when done well) it's also the most pointless because it draws out the inherent flaw with 3D. The human eye perceives and creates depth in 2D objects. That's just how it works, and it is why we can watch films in the first place. As we watch, out eyes perceive the moving 2D image, and our brains then process it to create the illusion of depth and space. It's the reason why when, if you are watching a scene in which one person is standing in the foreground and another is standing in the background, you don't think that you're watching a film about the friendship between a man and a giant. You can discern that people are standing different distances from the camera, and are not different heights.

Animation is the archetypal example of this phenomenon, since it really is just a collection of 2D paintings played one after the other. Thanks to the composition and shading of the artists, the images have depth anyway even without the addition of 3D. All the extra dimension does is accentuate what the 2D animation has always done - I can't say I ever watched The Lion King before and thought that it lacked depth or scope - and even then not by very much. The ultimate paradox of 3D from a commercial standpoint is that if it's obvious it's distracting, and if it's subtle then no one notices, and I was painfully aware of how unaware I was of the 3D throughout The Lion King. This raises the eternal question; if a film's in 3D and no one notices, why should they pay extra? It looked exactly the same to me as the 2D version that I still have on my battered VHS copy, except cleaned up and in much better condition, obviously.

For me, that's the key to why The Lion King in 3D has done as well as it has so far. People have been quick to point to the latter half of the title as being the reason for its success, but the real reason why lies in the first half. It's The Lion King. It's one of the most successful and beloved films of all time, regardless of medium (because, as Brad Bird is always quick to point out, animation is a medium NOT A GENRE), and, as the continued success of the (brilliant) stage show attests, there is still a love out there for the story. If the film had been re-released in 2D, with the same wide release that it received, with the same marketing push and with the same loving attention paid to the restoration work, people would still have gone to watch it in their droves. The magic lies in seeing the film on the big screen, with proper sound and with that hushed sense of anticipation that comes from sitting in the dark, waiting for the pictures to come to life.