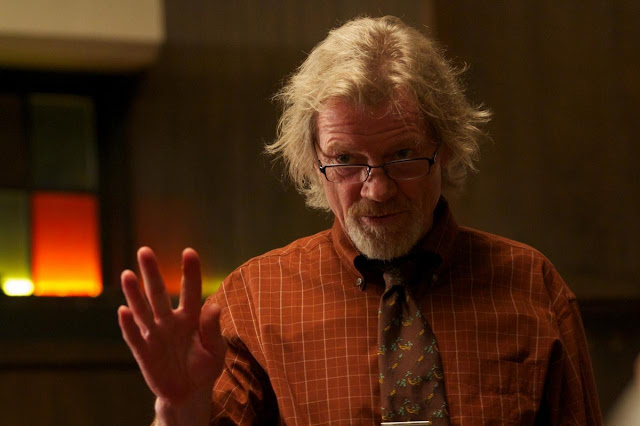 Growing up, Kevin Smith was a very important figure in my development as a film lover. His debut, Clerks, was one of the first films I had ever seen that seemed to say that just about anyone could make a film, no matter how limited their resources or knowledge of film-making. For myself and many others, Smith's lack of pretensions, both in his art and in his persona, made him one of the most accessible figures in modern film-making. There was, and remains, something incredibly inspiring about his story, about the idea that a convenience store clerk from New Jersey can make a film that speaks to a large number of people, then turn that goodwill into a career doing what he loves: making movies.

Yet being a Kevin Smith fan became increasingly trying, as it seemed that he was just going to make the same film over and over again with diminishing results. This became incredibly apparent after he followed up Jersey Girl - his one attempt to break away from the pop culture-centred, prurient style that he had become so known for - with Clerks 2, a tired reworking of his breakthrough which looked a bit slicker but lacked the energy or invention. (Though it did keep the listless acting of lead Brian O'Halloran.) By the time of 2010's Cop Out, a wholly mediocre action comedy that Smith took on as a director-for-hire job - a fact which Smith seemed to feel should exonerate him from criticism for producing a terrible film as a result - it seemed that, although Smith remained a thoroughly engaging presence in every other aspect of his small but sprawling media empire, he had become completely disengaged as a film-maker. For those of us who had grown up loving Smith's work, it was a sad state of affairs, one which made his announcement that he planned to retire after making another two films far less tragic than it might have been five or ten years before.

So Red State, whilst by no means a great film - it almost struggles to be merely good some of the time - comes as a truly pleasant surprise since it seems to find Smith engaging with a subject matter that he is passionate about. Whilst it retains some of the sloppiness that has always been part and parcel of Smith's aesthetic, it at the very least feels like a film that was born of a desire to explore something that means something to its creator, something which could not be said of much of Smith's recent work.

Not only is Red State a film that feels more energized than anything Smith has made in years, it also finds him moving beyond his usual genre - raunchy comedy - into horror, one which he has hitherto never attempted. The story begins when three teenagers (played by Michael Angarano, Kyle Gallner and Nicholas Braun) arrange to meet a woman for sex via a website. When they arrive at the woman's trailer, they are drugged, and wake up to discover that they have been taken hostage by the followers of Abin Cooper (Michael Parks), a fire-and-brimstone preacher who is two-thirds Fred Phelps to one-third David Koresh. Cooper and his flock believe that the end times are near and that they need to be ushered in with the blood of the wicked, and to that end they have taken to killing the sinners and deviants that they are able to lure into their lair. Before they can work through the current allotment, though, a confrontation with local law enforcement leads the ATF (represented by John Goodman) to lay siege to the group's compound, creating a situation where it seems like almost no one could make it out alive.

Smith's films have always lived and died on their scripts and the skill of his actors to deliver them, and Red State is no different. Though the different tone and style mean that there are few opportunities for the characters to opine at length about pop culture, Smith injects a great deal of wit and insouciance into proceedings that stops the film from becoming a grim exercise in Bible-baiting horror, and which manages to eke a few solid laughs out of even the most dire circumstances. John Goodman, in particular, seems to relish the chance to be an authority figure placed in a situation that spirals quickly out of control, yet he also manages to put a lot of subtlety into his interactions with his superiors - who want him to end the siege by ensuring no one gets out alive - and his subordinates, who have difficulty believing that they are expected to carry such orders out.

The undoubted star of the film, though, is Michael Parks, who is absolutely magnetic as Abin Cooper. Even though the character is a vile bigot, the power of Parks' performance is so overwhelming that it is easy to see how others would be swayed by his rhetoric, and Smith does a great job of conveying the appeal of Cooper, but more importantly, the appeal of those he was inspired by. Cooper is introduced in a  sermon near the beginning of the film which runs for 20-something minutes, yet Parks makes the scene work through sheer force of will. It's a compelling and uneasy scene that perfectly establishes the character and the stakes involved.

It's also thing that undoes the film, since it comes so early in proceedings that Red State never has much of an opportunity to top it. None of the other characters in the film are anywhere near as interesting as Cooper, and even though there are a number of fine actors in the cast who do solid work - including the great Melissa Leo and Stephen Root - none of them are able to make the film as compelling as it is when Cooper is on screen, insinuating his way into the minds of everyone around him. Smith also proves that he is a more of a writer than a director in the shootouts that make up the second half of the film, which are muddled and incoherent. The one opportunity that the film has to match the excitement of its opening third comes right at the end, when it seems that it is about to head off in a completely crazy direction, but ultimately resolves with a scene of a couple of men talking. It's a well-written scene, and a great showcase for Goodman, but ultimately something of a disappointment considering how promising the film began.

Yet for all its many flaws, Red State is still a worthwhile film, for me at least, because it finds Kevin Smith - a director who, despite everything, remains important to me - actually trying for the first time in far too long. Ultimately, the end result is less important than the effort itself.