Once again, sorry that this is going up a week late; my holiday has really knocked me off schedule. 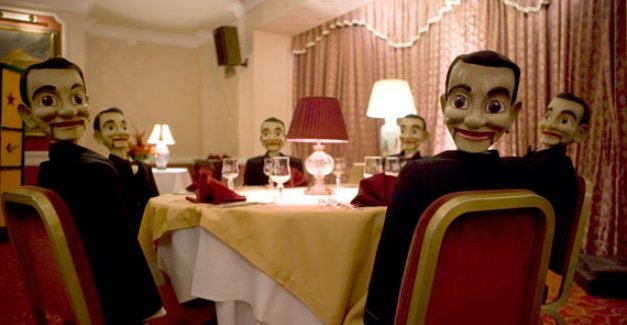 I'm going to do a little bit of wibbly-wobbly timey-wimey stuff here and review this excellent episode of Doctor Who by talking about the ending at the beginning, because not only was it a great coda to a fun, creepy and spooky episode (written by the ever-reliable Toby Whithouse, writer of "School Reunion", "The Vampires of Venice" and creator of Being Human) but it also made me re-evaluate the last couple of episodes and placed many of my criticisms of them in a new light.

My main problem with Doctor Who since it came back from its summer hiatus has been the lack of resolution of the fate of Melody Pond, aka River Song, Amy and Rory's kidnapped baby. The first half of the current run spent such a long time building up to her kidnapping, which in itself made for a great episode of television, that I assumed that the second half would have been about trying to get her back. Instead, we got "Let's Kill Hitler", in which it was firmly established that Melody grows up to try to kill The Doctor, fails (at least initially; I'm still pegging her as "The Impossible Astronaut" who killed The Doctor back at the start of the series, myself) but in doing so she is set on the path that will eventually turn her into the noble/smug River Song.

I assumed, after that episode, that there would be more to the story than that, rather than for "Let's Kill Hitler" to be the actual resolution to that plotline, so each subsequent episode frustrated me because I was expecting some movement towards trying to get Melody back, and the fact that neither Rory or Amy mentioned her struck me as downright callous. Since "The God Complex" ends with Amy and Rory leaving The TARDIS after The Doctor realises that the only way to keep them safe is to cut them out of his life, and in doing so Amy asks him to tell their daughter to visit if he ever meets her, it felt like there was some sort of closure to that storyline; Amy and Rory have accepted that they might never get to raise their daughter and decide to head off on a new, more exciting adventure together, rather than with The Doctor.

Now, I still think that it is a critical failing of the show that that sense of acceptance was not made explicitly clear at the end of "Let's Kill Hitler" (and if it was, then that's clearly my fault for not catching it, but I don't think it was) because it all feels very overly intellectualised, rather than coming from a place of genuine human emotion. I love what Steven Moffat has done with the show, but the show under his tenure has displayed a tendency to underplay emotion, sometimes to the detriment of the storytelling. For me, this run of four episodes demonstrates how tugging the heartstrings a little bit harder earlier on could have made Rory and Amy's actions feel more natural and logical, rather than contrivances required of the plot.

Anyway, that's enough of my gripes with the series to date, what about the episode?

Well, this was firmly in the creepy/scary category of Doctor Who episodes, as The Doctor, Amy and Rory find themselves stuck in a hotel whose rooms contain the worst fears of the people trapped within the hotel. They encounter a group of strangers who have all been trapped in the hotel as well; Rita (Amara Khan), a nurse; Howie (Dmitri Leonidas), a blogger who believes in conspiracy theories; Gibbis (David Walliams), an alien from a planet notable only for the ease with which they surrender to any and all invaders (his school motto; "Resistance is exhausting") and Joe, a gambler. As they are confronted by their worst fears, each of them seemingly starts to go mad - illustrated by some genuinely unsettling moments in which different close-up images of their faces are rapidly and disjointedly edited together - and start shouting "Praise Him", at which point a Minotaur-like creature shows up and they drop dead.

As someone from whom Stanley Kubrick's The Shining is a firm favourite, I liked the way that the hotel was clearly inspired by it, with its antiseptic atmosphere and rooms filled with terrors, including such universal images of everyday horror like ventriloquist dummies (though if they really wanted to go the full nine yards in thatt regard they should have used some of these designs), a PE teacher and a disapproving father, as well as Doctor Who-specific devices like The Weeping Angels and the image of young Amelia Pond, waiting in vain for The Doctor to come and take her away. The episode dealt in universal ideas about fear in a way which was very specific to the show, and that went a long way towards making it work as an excursion into haunted house horror.

More than that, though, the show made a bold move by making the real food for the curator of the hotel faith, rather than fear. Since The Doctor initially believes that it feeds on fear, he tells the people around him to dig deep and steel themselves using whatever they believe in to protect them, in the process exposing their faith to the hotel, which then feeds on them. This forces The Doctor to cause Amy to stop believing in him, which he does by talking about how he only took her along so that he could be worshipped, laying the worst aspects of himself out there so that Amy can be disillusioned, the hotel can lose its power, and the scant survivors can escape. It was a great scene that questioned the very nature of who The Doctor is and was beautifully played by both Matt Smith and Karen Gillan.

That realisation feeds into The Doctor's decision to part ways with Amy and Rory, and whilst I have no doubt that they will reappear at some point, I thought it was just a great piece of writing by Whithouse; he took the themes of the individual story and related them to a broader plot development in a way which felt natural and was emotionally satisfying, even poignant and sad. It was everything that I look for in an episode of Doctor Who, and I sincerely hope that the problems of the last few (even if they were ones that existed only in my over-critical mind) can be left behind as well.