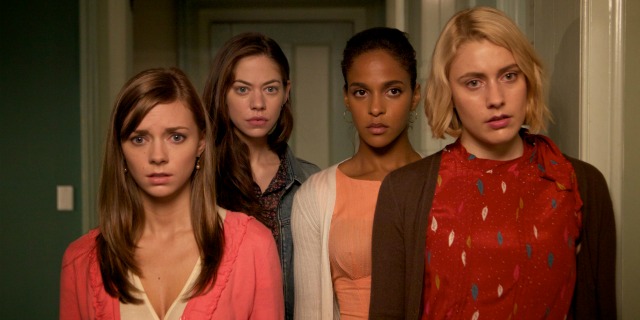 It's been fourteen years since Whit Stillman's last film, The Last Days of Disco, was released, but it almost feels like he never went away, since his latest film picks up where his first three films left off. Damsels In Distress finds Stillman blending together tangential, free-floating conversations, dialogue so dry it's a wonder his cast don't die of dehydration from delivering their lines, and a crisp, carefully constructed visual style with such consummate ease that, were it not for the fact that most of the cast were teenagers when he last made a film, you could assume that Damsels was shot right after Last Days of Disco, rather than a decade and a half later.

Told as a series of vignettes, the film takes place at Seven Oaks, a college over-run by a male population that seems to be divided up into sleazy sex-pests and borderline mentally-handicapped jocks - one character in the film has reached college without learning which colours are which - who are a constant source of  annoyance to a group of young women who aim to refine their fellow classmates and to raise the college as a whole up to a higher standard. Led by Violet (Greta Gerwig), they run a suicide prevention group where the solution to every crisis boils down to donuts and/or tap-dancing; aim to improve the personal hygiene of some of the more odorous students by handing them out free soap, which they also feel could help battle depression; and even try to start an international dance craze in the hope that it will bring people together in a sense of unity. In short, they spend their time obsessing over things that they think will help, but which probably won't.

If that descriptions of the group's activities set your teeth on edge, then Damsels In Distress is probably not the film for you. There's a preciousness to the characters - who, by their very nature, are so overly privileged and near-sighted that it's hard to like them in the early going - that will either irritate viewers to the point where they can't take it anymore, or irritate them a bit, but not enough to detract from the rest of the experience. Your tolerance for its central quintet will largely determine how much you like the film as a whole.

Take the character of Rose (Megalyn Echikunwoke), for example, who spends the entire film talking in a faux-English accent that is incredibly grating and gives an odd rhythm to her speech. Her cadence and punctuation are meant to be funny, though, and the way in which she repeatedly refers to the character of Charlie (Adam Brody) as a "player, or operator" with an unusual emphasis on the final syllable is a recurring joke in the film. For some people, that joke will get funnier through repetition, but for others it will never go beyond being a very annoying tic. Neither side is right or wrong in that divide; it is both very annoying and quite funny, but it illustrates the way in which any one aspect of the film can be a positive or negative factor depending entirely on who the viewer is.

So, if you are able to look past the fact that the central characters are shallow, privileged and close-minded snobs, there's a great deal to admire about the film. As with all of Whitman's films, the script is terrific and boasts some great one-liners, and some of the longer, more free-floating conversations between the characters are fascinating. Some of them are terribly indulgent and forced, but the charming cast manage to do the best they can even when the words don't seem to work as well off the page as they do on it. Gerwig is particularly impressive, and manages to add depth to Violet when she falls into a state of depression over the abrupt end of a relationship, making her seem genuinely fragile as a result. It provides a nice contrast to the overall tone of the film, which is touch too arch to be emotionally compelling.

The film also looks wonderful, and there are some sequences in it - most notably a dance number towards the end of the film - that are simply stunning. Stillman makes great use of his locations, and uses them to create the atmosphere of an almost utopian ideal of college life that clashes nicely with the cartoonish boorishness of the male co-eds that Violet and co. seek to improve.

Even if you can look past the characters, though, there are some rather glaring problems with the film; the episodic nature leaves the film feeling disjointed, and without a strong central throughline to connect its clearly delineated segments together the film feels baggy and unfocused. Those individual segments can be very funny, but they never feel as if they add up to anything outside of themselves. (It's not as if Stillman hasn't been able to do that in the past either, since he was able to give a strong core to Metropolitan's many disparate party scenes by connecting them to Tom's (Edward Clements) pursuit of Serena.)

The outlandish buffoonery of the male characters in the film is also problematic, since it seems to have been dropped in from a different story entirely. It proves especially troubling once the girls start to enter into romantic relationships with some of the men they previously derided, since it never suggests that the girls were wrong to judge them harshly, but that they really are just that dumb. There's a lack of dramatic, thematic or emotional payoff to their depiction that causes the ending of the film to feel a lot hollower than it might have been.

Still, for all its flaws, Damsels In Distress is a funny, light and witty return for Whit Stillman which, whilst not one of his best, is a decent comeback which will hopefully open the door for more wholly success films in the future. Or, it's a grating, dull mess filled with unlikable characters having discussions that go nowhere, and with a story that amounts to nothing, depending on your point of view.