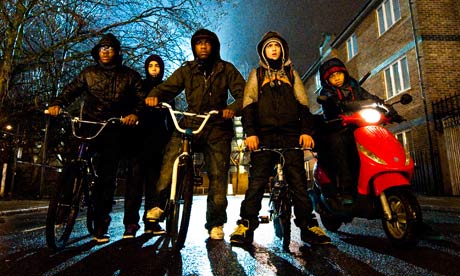 In Attack The Block, the feature debut of director Joe Cornish, a group of young hoodie types encounter then kill an alien. Thinking less of their act of violence than their mugging of a young nurse (Jodie Whittaker), the gang walk away, unaware that their actions will have dire consequences; more aliens are on the way, and now they’re out for blood.
When it was originally announced, many assumed that, given Cornish’s history as the ‘Joe’ half of comedy duo Adam and Joe, Attack The Block would be a straightforward comedy, or at the very least a genre satire in the style of Shaun of The Dead, and whilst the film does have plenty of hilarious moments, many of which stem from the interactions between the cast, particularly Nick Frost and Luke Treadaway in small roles, it’s best understood not as a parody of the alien invasion or siege genres, but as an homage. Cornish grew up loving the films of Spielberg, Ridley Scott and John Carpenter, and his inventive, thrilling film is a terrific love letter from a film-maker to his heroes. He mixes the awe of Spielberg, the threadbare economy of Carpenter and the bleak futurism of Scott – the ‘Block’ of the title is shot using harsh lighting that accentuates its unearthly coldness, intentionally recalling Alien’s “Nostromo” – to great effect. The aliens themselves are wonderful, eerie creations that have a real physicality and menace, as does the surprising level of gore.
On the human front, fronted by John Boyega in a star-making turn as Moses, the leader of the group, the young cast do a great job of looking and sounding like a real gang whilst also finding ways to make them seem like people rather than caricatures. It’s a big risk opening a film with a scene of your heroes mugging an innocent woman, and if the cast weren’t so winning and exuberant the film would completely fall apart. Fortunately, much as seeing how they live endears them to Sam (Whittaker), the film manages to win the audience over as well.
In the tradition of genre film-makers like Carpenter, Attack The Block also manages to hide some social commentary behind the adventure. Cornish is very sympathetic to his young men, who have clearly been forgotten by society, and are demonised even as they help save it, and his desire to show them as more than just stereotypes feels even more relevant now than it did back in May, before the riots in London made the alienation the characters feel oddly apt. That isn’t to say that the film is a scathing satire on modern society; it isn't. Yet the subtext adds bite to a film that already had pretty sharp teeth to begin with.