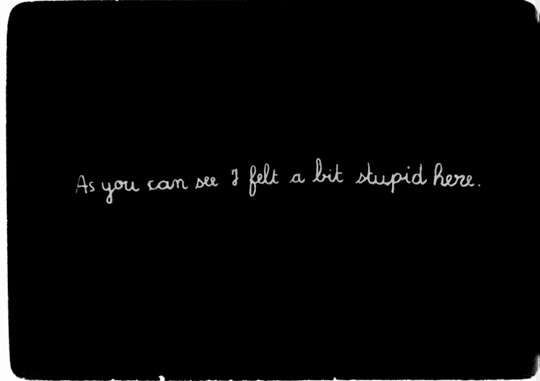 There are a number of interesting questions and thought experiments posed throughout Michel Gondry's Is the Man Who is Tall Happy? in which the aggressively whimsical filmmaker recounts several conversations he had with the influential philosopher, linguist and political activist Noam Chomsky. They touch upon several interesting ideas, such as the importance of language in shaping perception and how humans understand language from an early age. They also talk at length about Chomsky's childhood during the Great Depression, and how attending a "Deweyite" progressive school shaped his intellectual development. It's a film with plenty to say, or at least it is about a man who still has plenty to say.

Perhaps the most interesting question the film poses, however, is the one that it asks accidentally. In what amounts to a director's statement, Gondry opens the film with a ream of narration in which he describes discovering Chomsky's work through Mark Achbar and Peter Wintonick's documentary Manufacturing Consent. That film was based on Chomsky's book of the same name, and as such puts across many of his ideas of how mass media advances the interests of corporations and the elites who control them. While he admits that the film was effective in that respect, Gondry also knew he was seeing Chomsky's ideas filtered and shaped by the persuasive seamlessness of editing. The essentially manipulative nature of cinema meant that any film about Chomsky would be at risk of making his arguments in a way that is superficially accessible, rather than presenting them to the audience so that they can make up their own minds about their validity.

In creating his own film about Chomsky, Gondry tries to destroy any sense of easy continuity and to force the audience to engage with Chomsky's ideas without being misled by their presentation. To achieve this, he presents their discussions through animation. He then takes that distancing effect one step further by avoiding a consistent look. The animation varies wildly from moment to moment. It's always done in a simple, almost primitive style, but sometimes Gondry depicts the scene fairly realistically, in that he shows two people sitting in a office (though one of them often has a camera for a head) or illustrates something that Chomsky is describing, such as a discussion about why a genetic copy of a tree could be considered to be the same as the original tree. At other times, the drawings get elaborately surreal and impressionistic, seemingly having no connection to the conversations. At one point, Gondry even goes so far as to freely admit that he is just looping the same bit of animation over and over in order to save effort while decoding a moment in which he and Chomsky talk across each other owing to a miscommunication.

This constantly shifting style means that Gondry is completely successful in preventing the audience from ever getting lost in the actual form of the film. It's impossible to watch Is the Man Who is Tall Happy? without being constantly aware that you are watching an artificial construct, and as such you have no choice but to focus on the ideas being discussed. However, the film itself is actually not that interesting to watch, owing to the fact that Gondry, largely due to his imperfect command of English, is a stilted interviewer and often struggles to get across his points to Chomsky. This impacts the substance of their conversations as well, since it means that they never discuss Chomsky's ideas in any great detail. The most meaningful section of the film ends up being a discussion of Chomsky's relationship with his late wife, which is a very sweet and human strand, but the film ends up treating the one thing it gets right as fairly unimportant, while struggling to offer insight into the things it views as more important.

Which brings us back to the question that the film ends up posing without actually meaning to: is it possible for a film to accomplish everything its director sets out to achieve and still be a failure? Based on Is the Man Who is Tall Happy?, the answer is a resounding 'yes'.