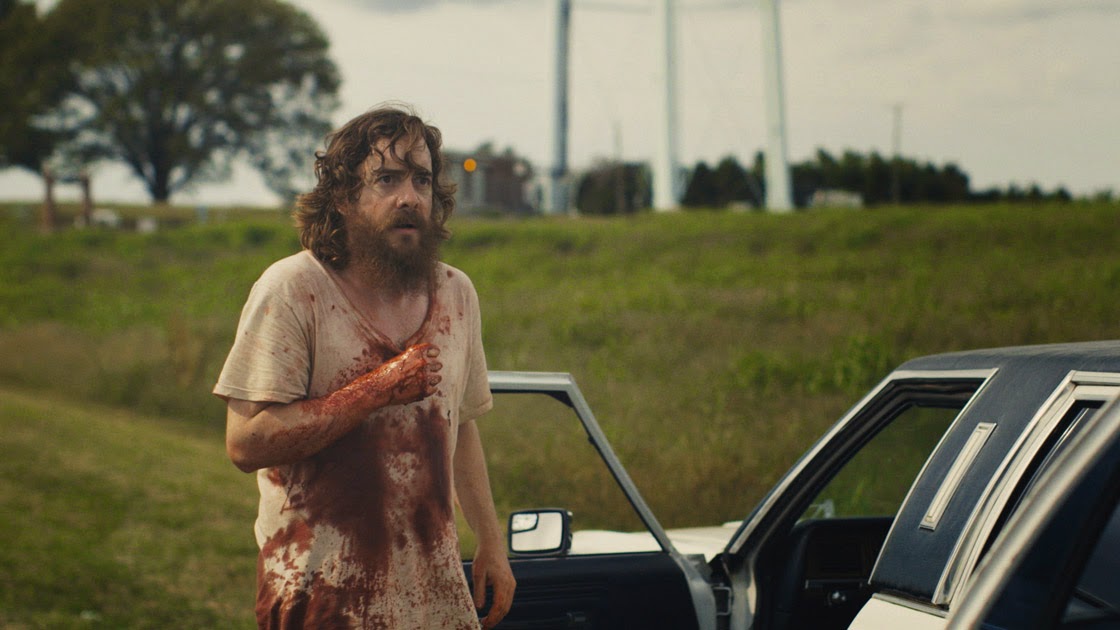 The first twenty minutes of Jeremy Saulnier's darkly comic revenge thriller Blue Ruin works as a great illustration of F. Scott Fitzgerald's maxim that action is character. There's almost no dialogue during the opening movement, and what little there is tends to be muted or fades out soon after it starts, but Saulnier perfectly elucidates the nature of his main character, Dwight (Macon Blair). Introduced taking a bath in a house he has broken into (before then jumping, naked, out of a window when the owners come home) the film establishes him as someone who is resourceful, able to survive on his wits, but not terribly forward thinking. He knows how to get what he wants, be it a bath, some food or a couple of dollars from recycling cans, but he doesn't think about the consequences until it's too late to do anything about them.

Those qualities take on a starker, darker tone when Dwight learns that the man who killed his parents many years earlier is about to be let out on parole. This devastating news doesn't initially seem to register on Blair's face, covered as it is by unkempt beard and long, dirty hair, but the ominous score and Saulnier's uncomfortable close-ups hint at their deeper significance. After throwing away almost all of his meagre possessions and hooking up the battery of the blue Pontiac that serves as both his transportation and home, Dwight sets off to find the man who destroyed his life, fully intent on wreaking bloody havoc.

In the first of the film's many jarring deviations from what seems like a standard formula, Dwight succeeds. Admittedly he doesn't do so gracefully; his moment of triumph is completely drained of any catharsis because it's prolonged, painful and bloody, and because he doesn't manage to make a clean exit, but before the end of the first act he has achieved precisely what he set out to do. He walks away, drenched in the blood of the man he set out to kill, and prepares to move on with his life.

Unsurprisingly, given how quickly and suddenly his quest ends, that's far from the end of Dwight's story. Blue Ruin is not about revenge, but fallout. As with his interrupted bath at the beginning of the film, Dwight's decisions rebound on him in horrifying fashion, but instead of having to run through backyards grabbing clothing off of lines, he has to contend with his victim's family, who come looking for revenge of their own. It's not even about the reasons for revenge - the whole backstory about how and why Dwight's parents were killed is delivered in two or three lines of dialogue - but about how revenge becomes a self-perpetuating cycle. Dwight's entire life up until the start of the is really just a reverberation of an act of violence that happened years before.

Saulnier's film is about the idea that an eye for an eye makes the whole world blind, and that violence and hatred will only breed more violence and hatred, even if it's undertaken with supposed righteousness. It's something which is implicit (or should be implicit) in any decent revenge story, and as such is not exactly unbroken ground. What sets Blue Ruin apart is its centre: Dwight is a frankly dreadful avenging angel. He's almost completely inept, and the film ekes darkly funny laughs from the moments when Dwight fails to do the very things that people in these kinds of movies always seem to know how to do. He steals a gun, but breaks it almost instantly when he tries to remove the lock on its trigger; he holds someone hostage, but falls for an obvious ruse that almost gets him killed; he tries to treat an injury using alcohol and tweezers, but ends up making it much, much worse. Dwight is a man wholly unsuited for the story around him, and he survives despite himself.

While Blue Ruin works terrifically as a sly commentary on revenge stories, highlighting the way that some cliches of the genre - in particular, making long speeches about why you have to kill someone rather than actually killing them - would probably get you killed, it's also very satisfying as an example of the genre. The action scenes, while sparse, are exciting and filled with tension. Saulnier squeezes every drop of suspense he can out of scenes of Dwight preparing himself, as well as the ones in which his life is endangered, by holding on them for just slightly longer than is comfortable. It's by no means a slow film, but it knows that sometimes staying perfectly still is more terrifying that moving quickly. It balances critique and entertainment without coming across as smug or above its own story: it acknowledges that these kind of stories are rooted in a desire for bloodlust, but it also knows how to satiate it, and it does a damn fine job of doing just that.