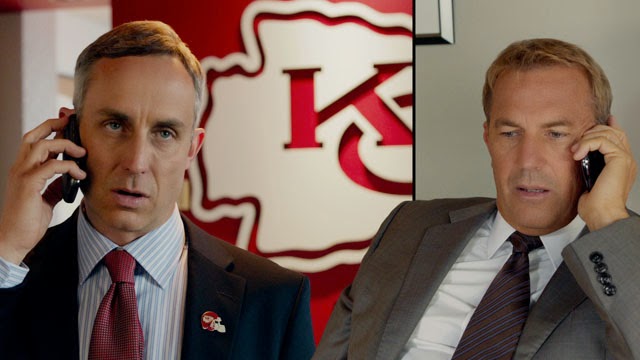 Watching Ivan Reitman's Draft Day is like tuning into the fourth-quarter of a football game where one side is being completely crushed by the other; you know how it's going to end and you feel like all the interesting stuff happened long before you started watching. This sense settles in during the first ten minutes of the film, during which we learn that Sonny Weaver, Jr. (Kevin Costner) is the general manager of the Cleveland Browns and that he has been presented with a potentially very lucrative trade with the Seattle Seahawks, one that would allow him to choose the number one pick in the NFL Draft. We also learn that his job is on the line if he doesn't make a bold move exactly like the one he has been presented with. As the day progresses, Sonny investigates the background of the number one pick (Josh Pence), and weighs his strengths and weaknesses against a less skilled but more passionate player (Chadwick Boseman) and tries to determine which would be the better fit for his team.

That set-up seems like enough foundation to build a whole film on, but the script keeps loading on backstory that the film seems ill-equipped to carry. Not only is Sonny's job on the line, and not only is he in constant conflict with his hot-headed coach (Denis Leary), but he also discovers that his girlfriend Ali (Jennifer Garner) is pregnant, and we learn that all of this is taking place less than a week after his father, who had previously coached the Browns before being fired by Sonny, had died. To give a sense of just how awkwardly the film handles this wave of information, bear in mind that this is all established in the ten minutes it takes for Sonny to get to work.

Draft Day never really recovers from that opening info-dump since it leaves the story with nowhere to go. (It doesn't help that much of the information is relayed using distractingly cheap split-screen effects which are meant to be dynamic but just look hopelessly fake.) Sonny's choice is stated loudly and obviously, with Bo Callahan (Pence) and Vontae Mack (Boseman) being portrayed in such broad strokes that it leaves little doubt about which one will end up being picked. The particular mechanics of how that decision ends up being made leave a little wiggle room for surprise, especially once the Draft itself begins and the focus shifts from questions of what makes a good player to showing how last-minute deals are struck, but the journey is never quite interesting enough to justify how obvious the destination is. It lacks the compelling intricacy to make it the football equivalent of Moneyball since it prizes gut instinct over analysis, but it also lacks a sense that the sport means anything to these people besides a source of income. It's a film about back room dealing that doesn't seem to have any brains, and a film about characters who say they truly love football which is oddly devoid of heart.

Even the performances fail to make the film work as a story about characters with conflicting ideas butting heads. Costner does solid work at conveying Sonny's gnawing desperation and his intuitive genius for making the right call, but he also has no chemistry with any other actors in the film. That's not always his fault - Frank Langella is so thoroughly disengaged in his small role as the owner of the Browns that he gives his entire performance while wearing sunglasses, suggesting that he didn't even want to put in the effort of using half his face for the role - but it's a real problem when he has to square off against Leary since there is no sense of animosity between them, even when Leary starts a fire in Costner's office for no good reason. There's so little sense that either actor is really engaging with the other that they might as well have been filmed in front of separate green screens and stitched together in the editing room.

But the biggest void, the one which causes the film to grind to a halt every single time the two characters are on screen together, is the relationship between Sonny and Ali. Setting aside the typical Hollywood dynamic of an older actor being paired with a younger actress, which is a lazy cliche but one that can work with the right actors, the film never convincingly sells the idea that these two people have ever or could ever be romantically involved. They're so stilted and uncomfortable around each other that they don't look like they could make a sandwich together, let alone a child. Garner tries her best to inject the role with a certain feisty resolve, particularly when it comes to depicting Ali as a woman who has fought her way into a very male-dominated arena, but it rings false because the character is so ill-defined; she professes to love football at some times and actively disdains it at others, sometimes in the same scene. Garner is talented enough that should could have reconciled those two aspects of the character, but she's so marginalised that she only ever gets to define herself in terms of whatever male character she's talking to at any given moment.

Despite a third act that works despite coming off as a version of Sidney Lumet's Fail-Safe with football trades subbed in for atomic bombs, Draft Day is an utter mess of a film. It's weighed down with what feels like a whole extra movie's worth of backstory, much of which distracts from the central story (or, in the case of a subplot involving Terry Crews as a former player who wants his son to play for the Browns as he did, gets completely forgotten about once it's introduced). A more stripped down version, one that focused more on the minutiae of what the trades involve, or one that committed more fully to its characters as real people who genuinely love football, would have been more entertaining and interesting. As it is, Draft Day feels like a sloppily edited advert for the NFL. So sloppily edited, in fact, that it forgets to include much actual football.