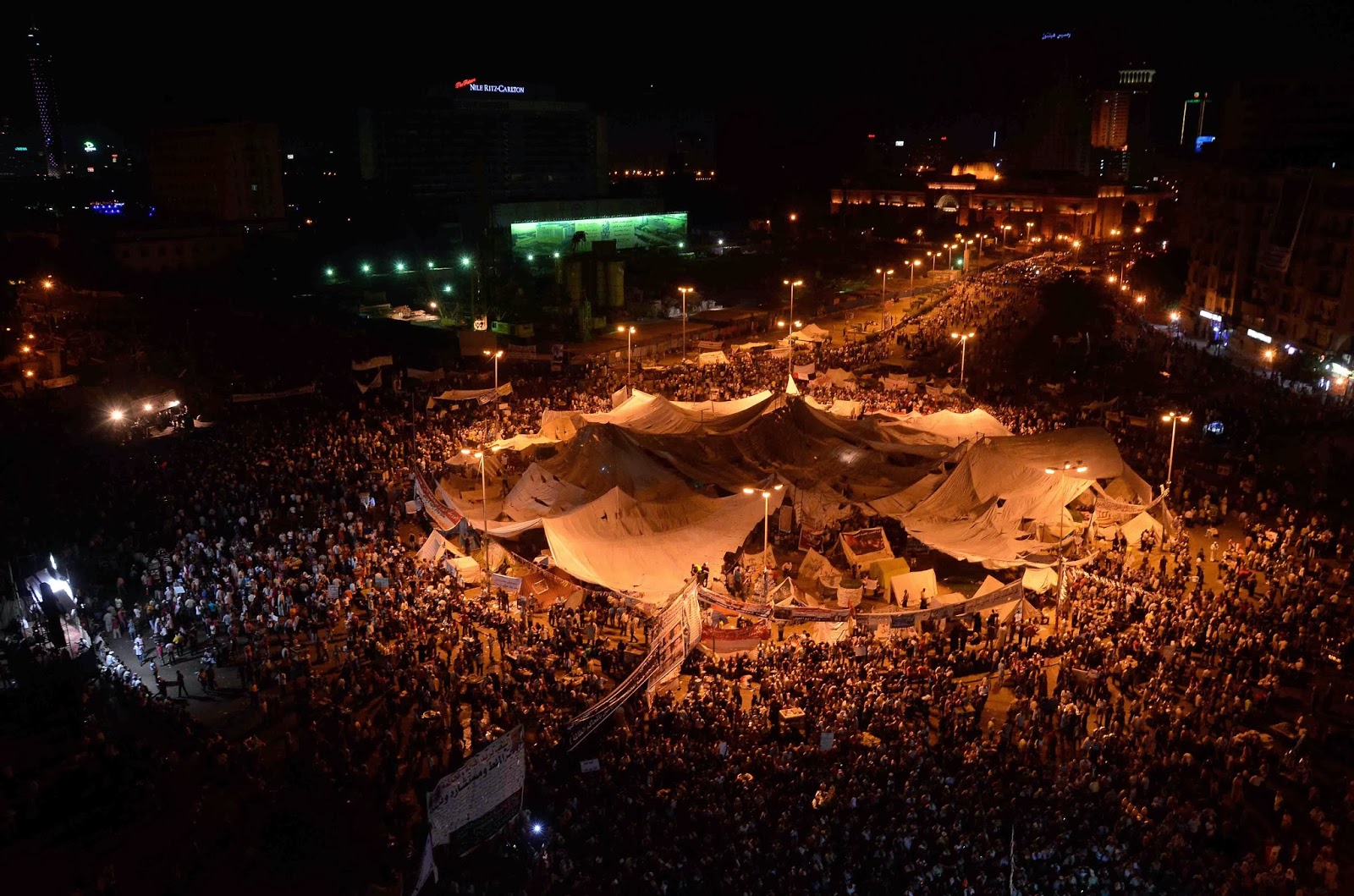 "As long as there is a camera, the Revolution will continue."

While these words, spoken by the revolutionary Ahmed Hassan about halfway through Jehane Noujaim's The Square, would no doubt have pissed Gil Scott-Heron off, they perfectly encapsulate the ethos of the film and the movement it documents. When opponents of former Egyptian President Hosni Mubarak occupied Cairo's Tahrir Square in January of 2011 in protest over, amongst other things, Mubarak's 30 years of dictatorship, cameras were there to capture it. They were also there when Mubarak resigned, when the army took over and promised elections and a new constitution, when the elections were eventually held and were won by the Muslim Brotherhood. They also captured the ideological toing-and-froing as different groups within the anti-Mubarak movement began to turn against each other. They helped capture these moments from the perspectives of people on the ground who were fighting, both literally and figuratively, for the country's future, and allowed them to disseminate information to the world. The Revolution would have happened whether it was being televised or not, but The Square suggests that it might not have been sustained without cameras there to record every joyous, wrenching, bloody moment of it.

Though Noujaim has plenty of on-the-ground footage with which to reconstruct the narrative of how the Revolutionary movement started, as well as the ways in which it gradually fractured, enough time has passed so that she can maintain at least some distance from the early, heady days at Tahrir Square. This gives The Square, much like Burma VJ or 5 Broken Cameras, a mix of visceral reportage and more sober assessment. The sense of community and joy that surrounds the Square in 2011 is allowed to play out without any attempts at arch commentary or heavy-handed foreshadowing, conveying the genuine hope of the people involved that they were changing their country for the better. But Noujaim does allow different viewpoints - including interviews with members of the armed forces - to fill shade the edges of the triumphant narrative, tempering the elation that emerges immediately after the Revolution's first "victory" plays out.

Yet even as the situation in Egypt changes more and more rapidly, as the Revolution fades in the face of apparent triumph and is met with counter-Revolution, and as the popular movement is co-opted by the Muslim Brotherhood, Tahrir Square itself remains central to the narrative. Each of the central figures in the film - from Ahmed to Ramy Essam (described as the singer of the Revolution) to the actor Khalid Abdalla and Magdy Ashour, a member of the Muslim Brotherhood who begins to doubt the actions of his leaders - all find themselves in the Square at some point, and it quickly becomes more than just a physical place, but a metaphorical one. It comes to represent a source of power and strength for those who hold it, as if merely occupying Tahrir Square grants control of Egypt. It represents hope for change, but also provides the backdrop for scenes of fear and death as the army fire on protesters and run them down in troop transports. It represents the promise of a better future at the beginning, but by the end seems to represent opportunities lost.

As well as being a gripping personal account of political upheaval, The Square is an excellent microcosm of Egypt's journey towards a broader political consciousness. Through its relatively limited focus on only a handful of figures, it manages to convey the chaos and complexity of the political climate and the dangers inherent in having a Revolutionary movement with a divided conscience and no clear endgame beyond wanting change. The deeply personal trauma and violence experienced by the people on the ground is keenly felt and often difficult to watch, but it all feeds into the film's attempt to record a situation which has so many divergent political interpretations.

Considering how fluid the situation in Egypt has been over the last three years, it's not surprising that The Square doesn't end in the most comprehensive or satisfying way. (Indeed, the version streaming on Netflix, and which has been Oscar-nominated, is different from the one that played at festivals last year since Noujaim had to incorporate new footage accounting for the overthrow of Mohamed Morsi and the Muslim Brotherhood.) The story continues in the streets of Egypt's cities and will continue to be told in the footage captured by its people, but The Square stands as a thrilling, possibly definitive document of the country's birth pangs and baby steps on a path towards...something. What that 'something' will be remains to be seen, but now the promise of a new Egypt will remain; a permanent Revolutionary moment, captured forever on screen.