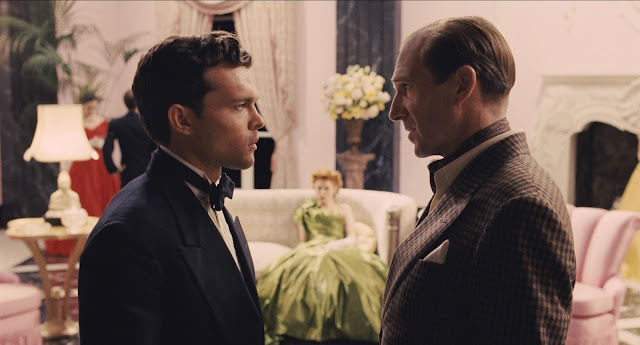 Early in Hail, Caesar!, Joel and Ethan Coen's farce set at an MGM-esque movie studio in the early 1950s, the narrator (Michael Gambon) refers to the films overseen by producer/fixer Eddie Mannix (Josh Brolin) as pieces of gossamer. It's a poignant phrase to describe the kind of shimmering popular entertainment being cranked out by the fictional Capitol Pictures, but it also feels like the Coens are lampshading how light and frivolous Hail, Caesar! feels compared to some of their other films. Much as Woody Allen ended You Will Meet A Tall Dark Stranger by invoking Shakespeare's line about sound and fury, or the Coens ended their own Burn After Reading by having J.K. Simmons acknowledge that the story didn't amount to much, the "gossamer" line feels like a pre-emptive apology for the film which contains it.

That impression is borne out, at least in the early going, as the film jumps between numerous storylines focused on the behind-the-scenes antics of Capitol's biggest names. Production on a lavish aquamusical is constantly interrupted because the secret pregnancy of its unwed star (Scarlett Johansson) makes it increasingly difficult for her to film the set-pieces, and also presents a potential PR nightmare for the studio if news of the pregnancy gets out before they can arrange a face-saving marriage. Hobie Doyle (Alden Ehrenreich), the athletic star of a series of cheap, crowd-pleasing Westerns is roped in to play the lead in an adaptation of a highbrow Broadway play, a role for which he is beyond ill-suited. Meanwhile, Square-jawed matinee idol Baird Whitlock (George Clooney) disappears from the set of the biblical epic he's working on (also called Hail, Caesar!) having been drugged and kidnapped by a pair of extras with mysterious designs.

Connecting all of these disparate stories is Mannix himself who, in addition to keeping all of Capitol Pictures' plates spinning, is facing a crisis of faith. A devout Catholic who goes to confession for basically everything that he does, Mannix is weighing an offer to leave the frivolous world of show business to take a job working for Lockheed. As he juggles the egos of movie stars, directors and executives over one particularly manic day, he wonders if perhaps it would be more fundamentally right, or even moral, to pursue a more substantial and serious life in the aerospace industry.

The character of Eddie Mannix shares his name with the real-life fixer who worked at/terrorised MGM in the '40s and '50s, and who devoted most of his energies during that time to suppressing scandals that could hurt the studio's image. Beyond the name, there is relatively little in common between Josh Brolin's character and his counterpart, either in biographical detail or temperament. Despite his ruthless efficiency, Brolin's version of Mannix is a basically decent guy dedicated to doing his job. The actual Mannix, on the other hand, was such a nasty piece of work that rumours persist that he was responsible for the mysterious death of George Reeves. You don't get much more nefarious than killing Superman.

The Coen-Mannix serves as an entryway into the chaos of Capitol. He's also the beating, troubled heart of the film. His uncertainty over whether or not his career is worthy, in the context of his faith and God's plan, becomes more resonant as the film around it gets crazier thanks to Brolin's taciturn yet soulful performance, and because the question of whether a life devoted to creating art is worthwhile - even if it's only through facilitating the creativity of others - is a serious one, even when asked in a thoroughly silly context. It's a question that anyone who devotes themselves to art, in whatever form, has to ask themselves at some point, and while the Coens have a well-deserved reputation for being arch know-it-alls, their depiction of Mannix in this regard is achingly sincere.

The Coens move quickly and nimbly between all these threads - and throw in a few smaller ones, such as the rivalry between a pair of Hedda Hopper/Louella Parsons-like gossip columnist sisters, both played by Tilda Swinton, for good measure - allowing just enough time to establish context, land a few jokes, then move on to the next thing. Even as the plot goes off in increasingly strange and unexpected directions, they maintain a neatness to each individual scene. None overstay their welcome, and all offer at least some small pleasures, ranging from a brief scene in which the tactile nature of an editing suite almost proves fatal to one of the cutters (Frances McDormand) to a full-blown musical number featuring Channing Tatum as a Gene Kelly-esque song and dance man.

Hail, Caesar! also offers one of the funniest moments of the Coens' entire filmography when a fastidious British director (Ralph Fiennes) tries to coach Hobie through a single line of dialogue ("Would that it were so simple.) with very limited success. The scene is completely incidental and has little to nothing to do with Mannix's attempts to find Whitlock and keep the studio running smoothly, but it's absolutely delightful and almost justifies the existence of the film on its own. It'd be easy to dismiss the film's focus on such small moments and to write the whole thing off as a lark. It is a lark, but that doesn't mean that it isn't also significant.

The film is an opportunity for the Coens to indulge their love of old Hollywood, something which shaped so many of their earlier films, but it's also a warm celebration of craft and expertise. The aforementioned editing room scene is an opportunity for a quick gag about the dangers of wearing scarves near whirring gears, but it's also a chance to marvel at the physicality of pre-digital editing, and all of its attendant finickiness. Similarly, a scene in which Hobie waits to pick up an actress for a date is primarily focused on him practicing tricks with a lasso. It's an utterly unnecessary - yet undeniably lovely - moment highlighting the easy skill that can only be achieved through years of diligent training and focus. The same could be said about the film itself. In both its lightest and darkest moments, Hail, Caesar! is a film about how hard it is to make art, and how even the thinnest piece of gossamer can be someone's salvation.