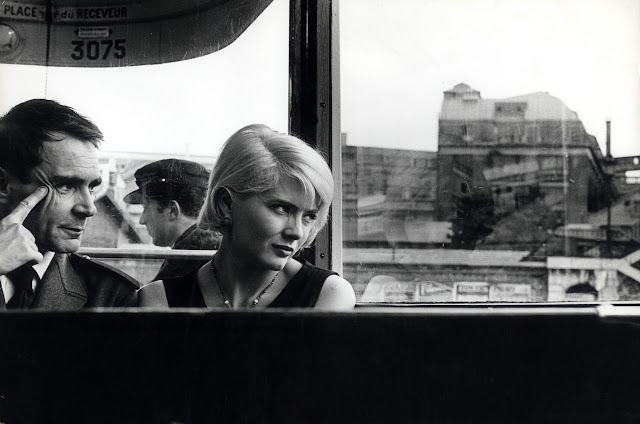 Much of my viewing this month was driven by an overwhelming desire to fill in some gaps in my knowledge of the French New Wave. I'd watched most of Godard's major work from the '60s and basically everything that Truffaut made, but the death of Jacques Rivette in January made me realise that there were some big names from the movement whose work I had never seen. Starting with Rivette's Paris Belongs to Us (which didn't make the top ten for the month but is still great), I started rinsing Hulu's selection of Criterion titles in order to see as many of the unseen films from the period as possible. So far, it's a decision I've been very happy with, and I would not be surprised if future journal entries end up being very French indeed.

After a subdued February I tried to make up for it with a hectic March. As such, I watched 31 new films this month, along with a long overdue rewatch of North by Northwest, which remains sublime even though I'm not sure if I'd include it in my top 10 Hitchcock films. Definitely would make the top 20, though. I mean, probably.

The worst film I saw in March was the Thai horror film Shutter, which I decided to watch purely because it was expiring from my Hulu queue. This is more of a relativistic assessment than the result of the film being egregiously bad. It's an effectively creepy ghost story with plenty of jump scares that genuinely freaked me out. The problem is that it has only one trick (a moment of silence is followed immediately by the sudden appearance of a horrible looking ghost, accompanied by loud music) and when every scare in a film is essentially the same, it gets a little tiresome by the end. In the case of Shutter, it goes beyond tiresome and ends up being kind of funny, particularly during the last half hour, when each of the ghost's appearances feel more and more like the Scary Movie parodies that would have been made if Shutter had been a big enough phenomenon to warrant the lazy mockery.

And now, here are the ten best films I watched for the first time in March of 2016.

As I said earlier, this month was heavy on French New Wave films and French cinema in general for me, and Varda's most famous film was not only the best of the bunch, but one of the best films I've ever seen. An exhilarating account of an hour and a half in the life of a young singer as she contemplates the possibility that she might have cancer, Varda captures the terror and the exhilaration that comes when someone has to confront their mortality, even if only in the abstract. She also uses the character of Cléo, something of a public figure, to explore the different ways in which women are depicted and perceived by French society, and uses her heightened state to push back against the established norms of the time. It's a playful, human film that I wish I'd seen sooner because it's a really astonishing piece of work.

This was my second Cocteau film after his celebrated version of Beauty and the Beast, and what surprised me about it, in addition to it being poetic and haunting and featuring some primitive but dream-like special effects, all of which I expected based on his earlier film, was how surprisingly funny it was. Not all the way through - the story of Orpheus and Eurydice doesn't lend itself to a high gag-per-minute ratio - but there is a fairly large chunk in the middle during which Orpheus and Eurydice, the former having retrieved the latter from the Underworld, have to figure out how to live together if he can't look at her without sending her back to the land of the dead. It makes for an oddly high-concept moment of farce in what is otherwise a film that's more witty than funny, and at times deeply sad. Yet Cocteau balances these disparate tones beautifully, making for an unforgettable experience.

I've started working my way through Rohmer's Six Moral Tales and this has been my favourite so far. He builds upon the style and theme of the first part, The Bakery Girl of Monceau, by relating the story of two young friends who meet the titular Suzanne, which in turn puts a strain on their friendship as one seduces her, abetted by the other, who in turn comes to pity Suzanne for falling for his friend so easily. Like The Bakery Girl..., the film is a fascinating and witty dissection of male attitudes towards women, and the ways in which young men contort themselves in order to live up their own, seemingly arbitrary codes of ethics. It also did little to dispel my impression that no one in France had a job in the '60s, and that they all just sat around in cafes.

Disney's animated features have been undergoing something of a second Renaissance since The Princess and the Frog gave their hand-drawn legacy a slightly more graceful note to bow out on than Home on the Range. Since 2009, each new release from the studio has been pretty good, even if only Tangled came close to matching the heights of the studio's best work. However, Zootopia may be my new favourite of the this bumper crop. It's got visual gags aplenty, a beautifully realised world, and an underlying metaphor about racial tolerance which shouldn't be necessary, but in the context of the current election season comes across as almost radical (to say nothing about the way in which its plot hinges on someone manipulating racial hatred for political gain). It's also been responsible for me having this Shakira song stuck in my head for two weeks solid, so it's got that going for it.

Anthology films are hit and miss by design, and multi-director ones tend to be even less consistent. This British collection of macabre tales is one of the better ones I've seen, but this opening segment, in which a museum tour guide is taken inside his favourite painting, was the undoubted highlight. Driven by an intensely sinister performance by Alan Badel, who plays a mysterious figure determined to 'improve' the painting by any means necessary, it's a darkly funny slice of Gothic cruelty that plays like a slightly more reserved episode of Tales From the Crypt.

My first dalliance with Kieślowski's Decalogue comes in the form of this, the feature-length version of one of the episodes. Seen through the eyes of a young man who kills for seemingly no reason, his victim, and the lawyer who has to defend him, it's an unsurprisingly bleak story (almost satirically so, considering that the opening shots are of a drowned rat and a hanged cat) rendered even bleaker by the visual style, which uses sickly green filters and limited focus to make Warsaw seem like a place decaying in front of our very eyes. From their, Kieślowski is unsparing in his depiction of both the killer's violence and the heartlessness of capital punishment.

Kim Novak and Jimmy Stewart co-starred in two films in 1958: Bell, Book and Candle and Vertigo. You'd be hard pressed to find two more different stories in which to pair the same two actors; a fizzy romantic comedy about witchcraft versus a dark drama about sexual obsession. In a premise that would be ripped off wholesale by Bewitched just a few years later, Novak plays a young witch who makes a mortal man (Stewart) fall in love with her in order to break up his engagement to another woman, then finds her own feelings for him becoming increasingly complicated. It's a delicious little comedy built around a rock solid cast - which also includes Elsa Lanchester, Jack Lemmon and Ernie Kovacs - which is only let down by a damp squib of an ending. Up to that point, though, it's legitimately magical.

The second part of Frankenheimer's trilogy of paranoid thrillers is not as unnerving as The Manchurian Candidate or as bleakly satirical as Seconds, but it's an excellent slow-burn of a film in which Kirk Douglas begins to suspect that members of the American military are planning to launch a coup against the sitting President (Fredric March) after he agrees to a peace deal. Like the best political thrillers, the pleasure of the film lies in the slow unfurling of details, and the way in which each new scrap of knowledge only deepens the characters' fear and uncertainty. If anything, certainty is the most dangerous thing, since it's only once people become truly aware of what's happening that they start dying mysteriously.

I'll have a fuller review of this up over the weekend (he wrote, skeptically), so I won't go into too much detail. Needless to say, I thoroughly enjoyed this incredibly well-realised B-movie premise, and hope that Bad Robot continue to use the Cloverfield name as clever branding to release sharp, smart genre fare for years to come. And that they don't take the better part of a decade to put out the third one.

I was wary of this one going in because the basic description of the premise - white Australian lawyer has to defend a group of Aboriginal men accused of murder - sounded like the makings of the worst kind of white saviour storytelling. I should have had more faith in Peter Weir, who uses that setup to thoughtfully explore elements of Aboriginal culture, obsession, and apocalyptic visions through the same unsettling yet grounded style that made Picnic at Hanging Rock one of the greatest films ever made. A compelling, driving mystery which also manages to feel uncanny and dreamlike.

Okay, since I put it out there at the top, here's my top ten Hitchcock films off the top of my head: