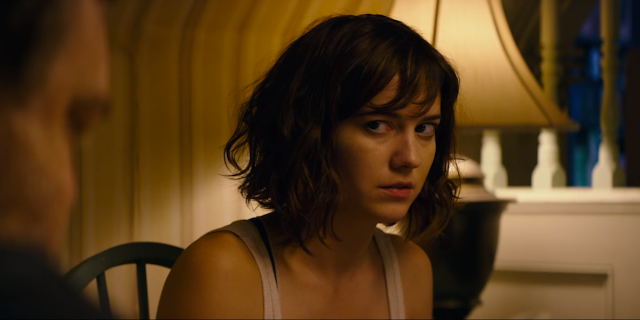 When the first trailer for 10 Cloverfield Lane appeared mere weeks before the film was due to come out - a shocking turn of events in an age of drip-feeding information, release dates being announced years in advance, and teasers for trailers for movies that won't come out for many months - and once it became clear that it wasn't a direct sequel to Matt Reeves' Cloverfield, the first thing I thought of, as is so often the case, was Halloween III: Season of the Witch. The third installment in the venerable horror franchise created by John Carpenter and Debra Hill is most famous for being the only one not to feature the character of Michael Myers, instead focusing on a supernatural storyline that had nothing to do with the slasher genre that defined (and was defined by) the previous films.

This startling departure was prompted by Carpenter and Hill, who thought that the Halloween franchise, instead of getting bogged down in the story of Myers (which had theoretically been resolved after two movies), could become an anthology series in which each entry told a different horror story loosely centred around Halloween. It was an interesting idea which was dropped almost as soon as the box office receipts for Season of the Witch came in, necessitating the return of Myers for increasingly lackluster sequels.

Yet the idea of an anthology series in which films are linked through genre and spirit is still an intriguing one, one which producer JJ Abrams and his team seem to have revived with gusto. The connections between 10 Cloverfield Lane and Cloverfield are decidedly tenuous. There are brief glimpses of fictional company names, but they're more like Easter eggs than solid bonds connecting the two films as part of a shared universe. The strongest connection between the two is that they're both smart genre films that take B-movie premises and deliver them with A-movie flair.

In a nod to/direct lift from Psycho, the film opens with a young woman leaving her home very suddenly. The reason why Michelle (Mary Elizabeth Winstead) is driving away is not explicitly revealed, and it quickly recedes into the background when she is knocked unconscious during a car crash and wakes up handcuffed to a pipe in a barren room. That room is in a bunker presided over by Howard (John Goodman), a doomsday prepper who assures Michelle that the world has ended, and that the only safe place is underground with him and fellow survivor Emmett (John Gallagher, Jr.). The tension between the three, and the mystery about what is actually going on, provides the engine that drives the relentlessly uneasy thriller that follows.

Director Dan Trachtenberg, working from a script credited to Josh Campbell, Matthew Stuecken and Whiplash director Damien Chazelle, squeezes every drop of suspense and tension out of that central premise. The bunker is perfectly designed for the story - its mixture of industrial grimness and splashes of domesticity provides a great physical and metaphorical space for the story to unfold in. Trachtenberg and cinematographer Jeff Cutter make the same handful of rooms feel by turns benign and menacing through judicious use of the closeup. The level of claustrophobia shifts depending on how threatened Michelle feels by the man who (literally) holds the key to her salvation, and the ways in which the bunker goes from being a place of games and bonhomie to one of fear and mistrust is a great demonstration of how focus and distance can shape mood.

The script is also phenomenally well-structured, both in terms of its slow unveiling of the story, with each revelation answering one question while asking two or three more, but also how well it handles the basics of setup and payoff. It's probably more a reflection on how bad the writing in mainstream movies has become, but it's so refreshing to see a film in which attention is paid to small details which then have a greater significance when they are brought back in at a later date. In particular, 10 Cloverfield Lane's script is great at hiding exposition and character detail in general conversation, so it's not immediately apparent what shreds of information will prove to be crucial. It not only makes exposition fun, it often succeeds in making it invisible.

Credit for the expert handling of the film's constantly changing dynamics also lies with the cast, all of whom have to shoulder a lot since they're the only characters on screen. Gallagher makes Emmett a likable foil for the two more forceful characters to bounce off of, and maintains a low-key ambiguity about whether or not he can be trusted. Even when he's being a charming goofball, the extreme nature of their situation makes every action suspect, and Gallagher plays to that without overdoing it. The real conflict in the film is between Michelle and Howard, and even with such a limited cast it can be easy to overlook Gallagher's work, but he makes us realise that Emmett is most likely to be collateral damage if things go south, and hope that doesn't happen.

Mary Elizabeth Winstead's been a consistently great presence in genre films for years now, always able to imbue archetypes with personality while also displaying a keen understanding of why those archetypes work. Here, she creates a heroine worthy of Ellen Ripley: a resourceful, determined and flawed character who is constantly trying to figure out how to get out, while also hiding her understandable fear at being the unwilling house guest of a man whose motivations are murky at best. Even when the atmosphere within the bunker is at its most convivial, there is still a sense of dread and uncertainty in the air, and that would be far less effective if Winstead wasn't so great at providing a smart, suspicious lead.

As Howard, John Goodman gives one of the best performances of his career. The whole film hinges on a series of mysteries - who is telling the truth? what really happened? what lies outside the bunker? - all of which are embodied by Goodman. It's always unclear what Howard's intentions are. He often acts like Michelle is a replacement for a daughter that he lost, but there's always an underlying sexual menace to their interactions that Goodman suggests but never quite brings to the fore. Howard is a man who suppresses his desires (most notably during a game in which he is unable to say the word "woman") and the truth with equal vigour, and the disparity between Goodman's domineering presence and his unnerving restraint makes the character unpredictable in ways that make for a compelling, but also terrifyingly human villain.

Apart from a slight misstep when the film trades its studied ambiguity for spectacle, 10 Cloverfield Lane is an immaculately realised work of genre filmmaking. It's tightly written, wonderfully played by its tiny cast, and executed with precision and elan. It didn't need to have Cloverfield in its title except as a clever piece of marketing (one that clearly worked because it got a lot of people to see a low-budget thriller that would usually disappear from multiplexes very quickly). If that's what it takes for this nascent franchise to keep delivering smart, interesting genre films every few years, then that seems like a pretty fair deal.