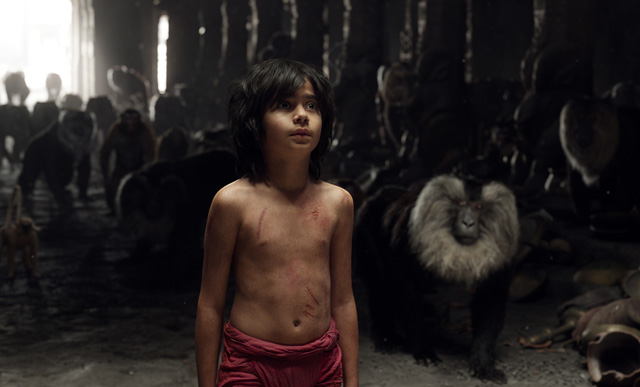 One of the more surprising (not to mention lucrative) developments in recent years has been Walt Disney's decision to reach back into their cavernous back catalogue to create live-action versions of their animated classics. It's surprising both because of how successful those films have been (most notably Tim Burton's Alice in Wonderland, which grossed more than a billion dollars worldwide back in 2010), but also because it's such a simple idea that it feels like it should have happened ten times over already. With a steady stream of similar adaptations due over the next couple of years (some of which make more sense than others), Disney's nostalgia-mining looks set to continue for some time. We can only hope that the next installments display as much love and wit as Jon Favreau's take on Rudyard Kipling's The Jungle Book. Or, more accurately, his take on the 1967 Disney version of The Jungle Book, since the story and design of Favreau's film has much more in common with that than the original stories.

Like Kenneth Branagh's stately, ravishing version of Cinderella, The Jungle Book is as much a refinement of its source material as it is a remake. It's beholden to the aesthetics of the original - as evidenced by Mowgli's mop top hairdo and burgundy loincloth - but writer Justin Marks changes just enough so that the story feels fresh. Instead of Mowgli (Neel Sethi) being forced to leave the jungle and his family of wolves because of a general fear that the tiger Shere Khan (Idris Elba) might decide to kill him, Mowgli volunteers to leave after being directly threatened by Khan, and because he doesn't want anyone to die protecting him. After setting off in search of a village so Mowgli can be with his own kind, he gets separated from his panther guardian Bagheera (Ben Kingsley) by stampeding water buffalo (in one of several visual references to The Lion King) rather than by Bagheera becoming fed up with Mowgli and storming off. And Shere Khan is given some pretty nasty scars and a more personal motivation for wanting the man-cub dead than in the 1967 version, where he wanted to kill for fun.

It also goes without saying that the original's odder elements - such as the vultures (modeled on The Beatles) who sang barbershop quartet (just like the Fab Four didn't) - are no longer present, and don't have 2016 equivalents. Which is a pity: I personally would love to see CGI birds based on One Direction sing some new jack swing.

Individually these are all minor alterations, but taken together they give the film a more straightforward, linear structure than the animated version, which was altogether more loose and dreamlike. The use of a clean structure for maximum emotional impact, combined with state of the art special effects (seriously, the photorealism on display makes The Jungle Book one of the most gorgeous-looking CGI films I've ever seen), is probably the closest thing that Jon Favreau has to a directorial stamp. As someone who provided the first building block of the Marvel Cinematic Universe with Iron Man, Favreau had already demonstrated his ability to combine classical storytelling with heart and spectacle, all of which are deployed to rousing, crowd pleasing effect here.

The biggest departure comes in the film's depiction of Mowgli, who is less passive, more ingenious, and has greater agency than his animated counterpart. This is most apparent in his knack for creating primitive devices that compensate for his deficiencies compared to his animal brethren. It's an aspect of Mowgli's personality that not only serves some important plot purposes - it allows him to help the bear Baloo (Bill Murray) get honey, cementing their friendship, and proves to be a vital component of his battle against Shere Khan - it's also central to one of the key conflicts in the film. His ability to make and use tools sets him apart from the other members of his pack, making a separation inevitable once the external pressure of an impending tiger mauling is applied. Mowgli is still occasionally overshadowed by the creatures surrounding him, but he's never merely a passenger, even when he is literally riding on the backs of the other characters.

As for those characters, they're brought to life by incredible special effects and a perfect voice cast. As good as the idea of Bill Murray as Baloo may look on paper, it's even better in practice: his laconic delivery is perfectly suited to a charming con artist who occasionally lets some real emotion seep through. The synchronicity between actor and role runs throughout the cast list, from Kingsley (reserved, practical, cautious) and Elba (so disarming that it's easy to forget that he's the villain) to smaller roles like Scarlett Johansson as the snake Kaa and the late Garry Shandling as a neurotic porcupine. They provide a strong support system for Sethi, who has to carry the whole film and does suffer from the bluntness that is always a risk with child performers.

Favreau and Marks handle the reworked aspects of the story so well that it's perhaps unsurprising that the film's weakest moments come when it hews too close to the original blueprint. When Baloo quietly sings "The Bare Necessities" under his breath as he and Mowgli are walking through the jungle, it's a fun nod to the earlier film. A few minutes later, when the two leap into a full performance of the song, it feels wildly out of place and forced. The same is true of the moment when King Louie (Christopher Walken), depicted as a hybrid of Marlon Brando's Colonel Kurtz - right down to a telltale head rub - and King Kong, interrupts the film's eeriest scene to break into a rendition of "I Wan'na Be Like You". The performances are good, and they don't do a disservice to the originals, but they just don't fit into the film that exists before and after the characters start singing.

It would be as if, in the largely forgotten Stephen Sommers-directed live-action Jungle Book, Baloo and Bagheera were allowed to talk for a single scene, despite not talking at any other point in the entire movie. Sure, it's not outside the realm of possibility given the story being adapted and the genre, but it would be a little disorientating to add in an element that is otherwise not present at all. Including the two most iconic songs from the animated version, but not making a full-blown musical, smacks of nostalgic/corporate obligation, especially since the performances could be removed entirely without affecting the plot. It's a rare moment of cynicism in a film which is blissfully earnest.

That's a relatively minor misstep for what is otherwise an efficiently delivered work of family entertainment. It's scary when it needs to be (but not too scary), sad when the moment calls for it (but not too sad), and even manages to sneak in some truly arresting images between the necessary action beats. It rarely excels, but it never feels unnecessary. It's a lovely rendition of a familiar story, which makes up in warmth and affection what it lacks in originality and invention.