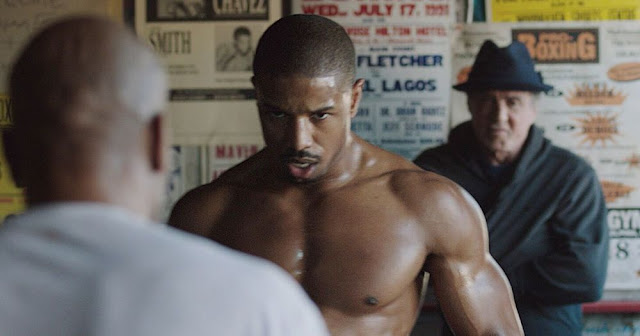 There are few more well-trodden genres than the boxing drama, a type of film which has been around since the earliest days of cinema, and which has been explored in pretty much every possible permutation. Yet the genre endures because boxing, at least in films, is dynamic and exciting. It's a sport centered around conflicts between individuals which offers clear-cut, life-or-death scenarios, backstage drama, and an easy structure around which to build the story, complete with rising action, moments of doubt, and eventual triumph. Like hearing a beautiful rendition of an aria, you may not see anything particularly new in a boxing film, but you can still appreciate the skill involved in making a good one. Creed, the seventh installment in the undying Rocky series, is a very, very good one.

Michael B. Jordan stars as Adonis Creed, the illegitimate son of Apollo Creed (Carl Weathers), the heavyweight champion of the world who fought, then befriended, Rocky Balboa (Sylvester Stallone), over the course of the first three Rocky movies, before being pummeled to death in the fourth one. Adonis never knew his father (on account of how the aforementioned pummeling happened before he was born) and so spent much of his early years in and out of foster care and correctional facilities, until Apollo's wife Mary Anne (Phylicia Rashad) took him in. Despite having a well-paying corporate job in L.A., the adult Adonis has taken to traveling to Mexico on weekends to box under the name Donnie Johnson, hoping to make a name for himself as a boxer in his own right. In order to pursue that dream, Adonis quits his job, moves to Philadelphia, and asks Rocky to train him. The former champ is initially reluctant, but the two gradually bond as they go on a journey which pits Adonis against his father's legacy, and Rocky against his own mortality.

Creed's connection to Rocky is both one of its greatest assets and its biggest hurdle, at least initially. For the first half an hour, the film shifts between scenes dealing with Adonis' life story and establishing his drive to become a boxer, and ones in which writer-director Ryan Coogler and his co-writer Aaron Covington have to lay out all the connective tissue between their film and the ones that preceded it. Coogler handles it with considerable elegance (particularly in comparison to Jurassic World, another long-delayed sequel which also traded on the legacy of its predecessors), but each nod to the earlier films forces us to remember that this fairly grounded and realistic boxing film takes place in the same continuity in which Rocky bought his best friend a robot butler.

Yet being connected to those earlier films, even if the script sometimes has to jump through some hoops in order to justify it, does lend Creed a certain level of prestige. Much as Adonis' surname imbues him with a certain aura, being able to use "Gonna Fly Now" - one of the greatest pieces of film music ever written - or getting to restage the scene of Rocky running up the steps of the Philadelphia Museum of Art (albeit in a very different context), allows the film to tap into decades worth of iconography that Coogler repurposes (Adonis' training montages, a series staple, also include scenes of Rocky suffering from ill-health) or subverts. The entire premise is basically an inversion of the original Rocky, with the hero coming from a life of relative privilege and wanting to pursue boxing for deeply personal reasons, as opposed to being a working-class nobody who does it because he has no other option. Creed is its own distinct entity, but the ways in which Coogler uses the imagery of the franchise shows both reverence for it, and an understanding of how references can deepen the story and characters, rather than serving as merely easy ways to exploit nostalgia.

Jordan's performance is central to how Creed refreshes and reinvents the Rocky formula. He makes Adonis charismatic, but laces that charisma with arrogance and pride. Adonis is a gifted fighter, but he doesn't have the experience or the guidance to know what his limitations are, so while he can win fights against experienced boxers, he also gets knocked down the moment he meets a truly worthy opponent. His unwillingness to use the Creed name to advance his career until he is absolutely forced to also puts a strain on his relationship with Bianca (Tessa Thompson), a musician with degenerative hearing loss who gets involved with Adonis when she knows him as plain old Donnie.

Jordan and Thompson have great chemistry together, largely because they both play their characters as people who have their own separate, yet interconnected lives. Bianca could easily be the focus of her own film, but she just happens to be playing a part in Adonis' story for the moment. Thompson and Jordan are also fantastic when it comes to making small, specific choices that add a sense of realism to scenes that might otherwise feel fairly standard. Prior to his first fight under Rocky's tutelage, Jordan explodes during a tense, but familiar scene of pre-bout jitters by exclaiming the he needs to use the bathroom and detailing why his gloves make that problematic, while during an argument between Adonis and Bianca, Thompson gently raps her hand against the edge of door, as if suppressing her frustration or steeling herself for a difficult conversation. Little gestures like those add character and spontaneity to beats that otherwise could be pretty rote, and both actors excel at them.

The same can be said of Creed's visual choices, particularly when it comes to the fight scenes. The most thrilling example of the film taking on a familiar moment in an exciting way comes when Cinematographer Maryse Alberti shoots Adonis' first professional fight in a single, unbroken take. As the camera bobs and weaves along with the combatants, dancing backwards and forwards while also advancing the story of the fight, it brings an immediacy and a formal daring to something that we have seen many times before. Much like Scorsese did with Raging Bull, Coogler and Alberti vary the style and tone of Creed's fights to better reflect the mindset of the characters and the tenor of the story. They don't get quite as expressive as Scorsese (except at one point in the final fight when the lighting shifts dramatically at a key moment), but they do everything they can to make sure that each fight feels fresh, new, and exciting, even if the outcomes may be easy to guess given the kind of story being told.

Stallone, meanwhile, shows a refreshing lack of ego in his portrayal of Rocky, allowing himself to seem old, tired, and worn-down, while retaining the charm and humour that have always made the character so endearing. It's a testament to his talent as an actor, as opposed to a movie star, that he manages to make a joke about how older people don't understand "the cloud", arguably the most hack comedic premise in recent memory, genuinely funny and naturalistic. It's a far more subdued performance than Stallone has given in years and, perhaps unsurprisingly, one of his best.

There's an added poignancy to Stallone's role given that Rocky's life has, intentionally or not, so often mirrored the arc of Stallone's career. In the original, both men were scrappy underdogs desperate to make something of themselves, and who ultimately made good when given their chance at glory. As Stallone's fame and ego grew, so did the bombast of each successive Rocky installment, culminating in Rocky IV, in which Balboa basically ended the Cold War. By Rocky Balboa, Stallone was pretty much washed-up and looking for a shot at redemption, and so was Rocky. It was fairly ridiculous that Rocky would get back in the ring based solely on the result of a computer simulation, but it was also fairly ridiculous that Stallone would make another Rocky movie sixteen years after Rocky V crashed and burned.

In that context, Creed may be the most metaphorically rich addition to the series since the original. When Adonis finds him, Rocky is a legendary figure who doesn't do anything related to boxing anymore. He runs a restaurant named after his long-dead wife, visits her grave and that of his friend Paulie, and putters around his small, empty house. He's someone who achieved great things, but has settled into the twilight of his life gracefully (arguably more gracefully than the man who portrays him, but I digress).

Adonis' arrival gives Rocky a chance to do something great by helping a younger man achieve greatness on his own terms. Creed is also the story of Ryan Coogler giving Stallone the chance to play his greatest character once more, but in the service of someone else's story. It allows Stallone to give a warm, funny, and moving performance, one which is much closer to the spirit of the first film than any of the subsequent entries managed, and parallels his own role as someone who is there to help, not be the central focus. Both actor and character serve to facilitate the stories of younger, hungrier men who have something to prove.

Having Stallone shift into the role previously occupied by Burgess Meredith makes sense narratively - it would be crazy to have Rocky get into the ring one more time at this point - but it also adds a thematic depth to Stallone's performance, one which feels like a perfect swan song for the character, unless he makes another of his unexpected comebacks. Regardless of what happens with future installments, Creed is a superb addition to a series that has had its peaks and troughs over the decades, but which has found renewed energy thanks to the addition of a great young actor, an immensely talented director, and a keen understanding of its own history.