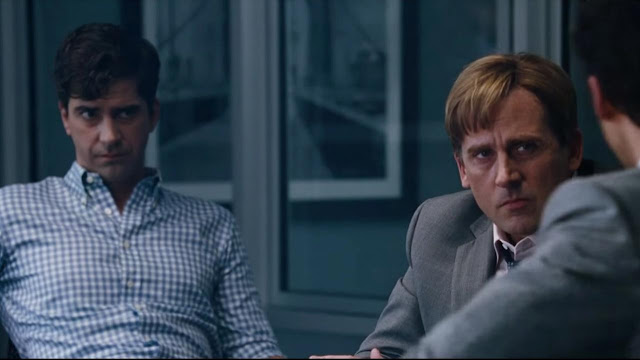 In 2010, Adam McKay ended the supremely silly buddy cop comedy The Other Guys with an apoplectic slideshow detailing the financial crimes committed by the banks and billionaires represented by Steve Coogan's character. It was jarring, to say the least, to go from jokes about Will Ferrell being an accidental pimp to a stark explanation of how the global economy collapsed, but The Other Guys' dysfunction now seems like a stepping stone to, and a mirror version of, McKay's latest, The Big Short. Whereas the earlier film told an undeniably absurd story laced with righteous anger, The Big Short is an undeniably angry film laced with absurdist humour, which McKay employs in the hope of making the 2007-08 financial crisis remotely understandable.

Based on Michael Lewis' non-fiction book of the same name, The Big Short jumps between several parallel storylines, all of which focus on men who read the signs that a financial disaster was looming, then set about trying to profit from it. The main storyline, in so far as a sprawling ensemble like this has one, follows Dr. Michael Burry (Christian Bale), the one-eyed, heavy metal loving manager of a hedge fund who realises in 2005 that the number of sub-prime mortgages will soon reach dangerous levels and bets 1.3 billion dollars that the housing market, traditionally seen as the most solid and unshakeable area of the American economy, will fail.

In the second most significant storyline, Mark Baum (Steve Carell), a hedge fund manager who, in the wake of a personal tragedy, has come to view the entire financial system as a cesspool presided over by parasites, learns about the increased number of mortgage defaults by accident. Driven by his indignation at the ways in which banks created an elaborate shell game in which risky mortgages were bundled with safe ones, and speculators caused the market to be overvalued to a ludicrous degree, Baum's decision to bet against the market is as much a crusade as it is an opportunity. Shorting the market would make him and his fund a huge amount of money, but it would also expose how thoroughly corrupt the whole system is.

The bulk of the film is rounded out by the efforts of a pair of young investors (Finn Wittrock and John Magaro) who also recognise that disaster is looming, and enlist an ex-trader (Brad Pitt) to help them get the official documentation they need to start making trades that will pay off in a big way once the apocalypse comes. Jumping between the other storylines is Jared Vennett (Ryan Gosling), an unabashed capitalist who views the collapse as a golden opportunity, and who also serves as the film's narrator/Greek chorus.

While each of these stories are pretty thin on their own, McKay's kaleidoscopic approach means that each offers a slightly different perspective on the housing collapse. Burry's story has the most limited focus - he almost never leaves his office - but it's probably the most useful for understanding how the crisis started because Burry was so ahead of the game when it came to identifying the trends that made a crash inevitable. Though there's some friction between him and his investors, represented by a perpetually flustered Tracy Letts, this thread is more cerebral than dramatic, and while Bale has some fun with Burry's idiosyncrasies, there isn't a huge amount of tension.

Baum's story is more emotional, in part because he is a volatile personality, but also because he sends members of his team to verify what Vennett is telling them about the impending mortgage disaster. Meeting a stripper who has bought five houses despite having a terrible credit rating, or a man who rents a house from a landlord who hasn't paid his mortgage in three months, offers a glimpse into the human cost of this high finance maneuvering which is otherwise absent from the film. Carell's performance is frequently too blunt and over-the-top - something which is not helped by McKay's chaotic direction, which throws everything at the audience in order to hold their attention - which prevents him from embodying the conscience of the film as fully as he could.

Those two stories are fairly compelling and clearly delineated, which makes the Wittrock/Magaro/Pitt plotline feel unnecessary. It's at times shriller and more technical than either of its counterparts, making it feel like something that would have been cut if it didn't happen to star the film's biggest star and producer. McKay tries to do for the financial crisis what Traffic and Fast Food Nation did for the drug war and fast food, but since the principle cast consists entirely of white dudes in suits, most of whom end up reiterating the same pieces of information, its attempts at thoroughness feel half-hearted. The story would probably have been better served by a keener focus, akin to J.C. Chandor's Margin Call, or a much broader one which tried to encompass as many strata of society as possible. What it does focus on is interesting and often entertaining, but it's also repetitive.

What redeems even the weaker storylines is the film's humour, which allows it to work on a scene-to-scene basis, even if it's too bulky to work overall. McKay ends most scenes on a laugh line or a moment of dramatic irony, with many scenes acting as self-contained sketches that illustrate some obscure aspect of the banking sector's malfeasance. There are several fourth wall-breaking moments in which a character, often Vennett, will mention something like a tranche or a C.D.O. and, instead of explaining the idea in dialogue or on-screen text, the film will cut away to a cameoing celebrity who illustrates the concept in a lighthearted, breezy way. The technique is most effective in its first iteration, both because it's surprising and because the cutaway itself is so absurd (it involves Margot Robbie and a bathtub) that it forces you to pay attention to the ideas being discussed,. Even if its impact lessens with repetition, each instance takes deliberately obtuse concepts and makes them transparent. They cut to the heart of what McKay is trying to do, which is to take a very complex, wide-ranging, and difficult to understand catastrophe and articulate it in the simplest terms.

Its comedic instincts are the film's saving grace, since they act as the spoonful of sugar that makes the medicine go down. There's a lot of anger on display, not just from the characters but from their creators, and it would have been easy to turn the film into a two hour screed about how nefarious banks are. It still is that on some level, but the jokes, the breaks in form and the relentless pace help it function as entertainment, which strengthens its attempts to educate. It's better at laughing into the void than as a call to action, but that doesn't diminish how effective it is at getting across the salient points of a misunderstood, and still dangerous period of recent economic history.

The film ends with a burst of text explaining, in the clearest possible language, that these mistakes could easily be made again unless people learn from them. Accessible, informed entertainment like The Big Short can play an important role in helping people learn exactly what happened. McKay is to be commended for that, even if it always feels like there is a sharper, punchier version of the film waiting to be unearthed.