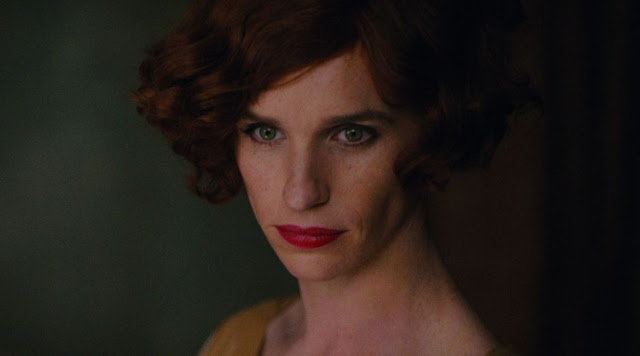 Ever since he won the Best Director Oscar over David Fincher, Tom Hooper has been a figure of scorn for a large swathe of cinephilia. It doesn't help that his visual style - a mixture of extreme closeups, excessive use of negative space, and a palette that is muted, to say the least - is easy to pick apart and mock, or that he sticks to pretty safe territory like period pieces or adaptations of immensely popular source material. He's proudly middlebrow in his sensibilities, and his approach has served him well as far as audiences, critics and The Academy are concerned. Hooper's luck runs out and then some with his latest, The Danish Girl, a deathly dull adaptation of the historical novel by David Ebershoff, which at times feels closer to a parody of his oeuvre than an actual addition to it.

Gerda Wegener (Alicia Vikander) is an artist living in Copenhagen in the 1920s. One day, she asks her husband Einar (Eddie Redmayne) to stand in for a female model. When the resulting paintings prove to be popular, Einar begins dressing and living as a woman named Lili. Having discovered her true identity, Lili's marriage to Gerda becomes strained, even as their collaboration proves immensely successful.

To say that The Danish Girl is simplistic in its depiction of gender and sexuality is an understatement. Lili's gender identity is treated in much the same way that horror films treat werewolves. The only significant difference is that it's not an inopportune bite that causes a sudden and uncontrollable change, but the act of putting on a dress for the first time. There are some attempts later on to place that act in a broader context, but for an unfortunate length of time, the film treats Lili's evolution with the same nuance found in Ed Wood's Glen or Glenda, albeit without any of that film's redeeming qualities. Lili being transgender is treated with the cold detachment found in a lot of prestige filmmaking, and its desperation to appear respectable prevents it from connecting with the humanity of its subject.

Hooper's direction further undermines any attempt at drama since his usual tics lend the whole affair an air of sterility. His tendency for compositions that emphasise emptiness worked in The King's Speech (or at least weren't a hindrance) because that film was centred around a warm, slowly growing friendship. In The Danish Girl, Gerde and Lili's relationship is never warm. Even before they start to drift apart, there's a distinct lack of chemistry between Redmayne and Vikander which makes it hard to care when their marriage fractures, especially when the cinematography seems geared towards making shots appear interesting, rather than serving the story or the characters. Nothing is more indicative of the limits of Hooper's style than the fact that he imbues close-ups of a dog's face with the same seriousness he does a scene in which Lili watches a peepshow in order to mimic the dancer's movements. There's no delineation in tone, making any supposedly emotional moments fall flat.

Redmayne's portrayal of Lili, meanwhile, is affected to the point of feeling alien. There's something of David Bowie in The Man Who Fell to Earth or Scarlett Johansson in Under The Skin in his overly mannered delivery, a sense that Lili (or Einer, for that matter) doesn't belong on Earth, and is always separate from other humans. His performance never gives the sense that Lili is a real person going through a profound life change, which reinforces how distant and unreal the whole film feels. The cumulative effect is that The Danish Girl ends up making the very idea of someone being transgender seem unnatural, which is the exact opposite of what the film is ostensibly trying to convey.

This is all tied up in the fact that Redmayne is a cisgender man, which adds an underlying sense of minstrelsy to the whole situation. Hooper's film is oddly reminiscent of Gore Verbinski's The Lone Ranger, in which the undeniably white Johnny Depp was cast as a Native American character in a story intended to critique the ways in which white culture has appropriated and exploited Native Americans. Yet at least Verbinski seemed uneasy about the way in which economics forced him to cast Depp and allowed that to permeate The Lone Ranger's story; There are no such pangs on conscience in The Danish Girl. By casting Eddie Redmayne as a transgender woman, the film denigrates its subject by implicitly saying that only a straight man could play her. (This aspect is particular damning when compared to Sean Baker's Tangerine, a 2015 film about transgender women which adopts the novel stance of actually casting transgender women.) What makes it even worse is that Redmayne doesn't even do a decent job of it.

But to lay it all on Redmayne's shoulders is unfair, because his co-stars fare no better. Alicia Vikander showed more life and vitality when playing a robot in Ex Machina. She has no rapport with Redmayne and the film never establishes what exactly her feelings towards Lili's transition actually are. From moment to moment she seems wholly supportive or completely dismissive, and she vacillates wildly between the two extremes instead of existing in a more intriguing state of confusion. That appoach would be ahistorical, since there is substantial evidence that Gerda Wegener was a lesbian (evidence that the novel and the film ignore), but at least it would have been compelling.

Ben Whishaw (who, between this, Spectre and Suffragette, is really building his brand as the most interesting thing in total mediocrities) and Matthias Schoenaerts try their very hardest to imbue their characters' romantic entanglements with Lili and Gerda with drama, but they can only do so much with dour direction, a bloodless script, and leads who are totally at sea. There's nothing to grab hold of in the film, dramatically, thematically, or emotionally. It's so dreary and drab that you have to wonder why anyone involved signed on in the first place.

The charitable take on The Danish Girl would be that it's a well-meaning, poorly executed attempt to tell a story that has renewed relevance due to the media's greater focus on trans issues in recent yea. The uncharitable, not to mention correct, take is that it's a breathtakingly cynical attempt to exploit its subject matter, and the broader discussion around trans issues, in order to aggrandize the people who made it. It manages to be both bland and hateful, telling an interesting story in a way which cannot help but bore. It is awards bait of the very worst kind.