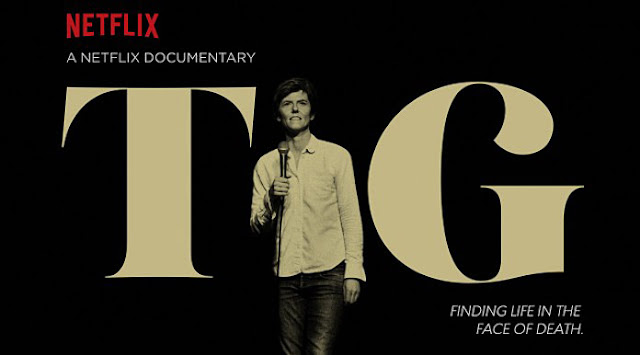 Anyone who has heard Tig Notaro's brilliant album Live (rhymes with 'give') will be familiar with what a terrible year 2012 was for the comedian. During the span of a few months, Notaro was hospitalized with the potentially deadly infection C. Diff, broke up with her long-time girlfriend, suffered the sudden and unexpected death of her mother, and was diagnosed with breast cancer. It was a bleak and terrible period in her life which led her to go onstage at Largo in Los Angeles to deliver a set which was almost instantly declared legendary, and which would fundamentally change her life.

Kristina Goolsby and Ashley York's documentary Tig covers the events that brought Notaro to that stage, as well as the album itself. For anyone familiar with Notaro's work and history, the first third of the doc doesn't reveal a huge amount that's new - a lot of the information is included on Live, after all - but it does contextualise it in terms of her life story, particularly when it comes to establishing just how close she was to her mother. It doesn't reveal a huge amount that wasn't already on the album, but it does enrich those stories, turning what was already a heartbreaking series of events into a much broader and sadder tapestry. It's one thing to hear Tig describe the weight loss she experienced as a result of her C. Diff, but it's quite another to see photos of her looking practically skeletal in the hospital. Live was already a raw and confessional performance, and in its opening act Tig adds plenty of imagery that is sure to make listening to it all the more visceral.

What makes the film essential viewing for comedy fans is its focus on everything that happened after Live went viral. The film begins in 2013, as Tig is making her return to performing after a period of grief, cancer treatment and convalescence. It then jumps back to fill in the gap between those two points, showing how the press from Live profoundly altered Tig's life and career. In a very short space of time, she went from being a relatively obscure comedian known primarily to people who knew the L.A. comedy scene (or the thriving podcasting community that has grown out of it), to someone who appeared in magazines and on national television shows to talk about her story. That would be a difficult transition at the best of times, but for it to come immediately after - and indirectly because of - a slew of tragedies makes it even more surreal and difficult.

As a result of all this swirling detail, the film tracks multiple threads of Tig's life simultaneously. Most immediately, it shows Tig's treatment for cancer, which involves chemotherapy and a double-mastectomy, and the effect that has on her and her plans for the future since her treatment complicates her plans to have a baby through IVF. It also follows the professional upheaval that comes with suddenly being in the public eye in a major way, especially since it's harder to work out new material on stage when everyone is expecting something transcendent. And it delves into the lingering impact of her mother's death by exploring what their relationship meant to Tig throughout her life, and how her grief influences her decisions.

That's a pretty heady mix of heavy shit, one that could have easily overwhelmed the film. However, Goolsby and York are able to deftly shift between the different strands by keeping Tig herself at the centre of the story. More importantly, they allow Tig's deadpan delivery and wry approach define the tone of the film around her. No one in the film is afraid of expressing an honest emotion, but because most of the interviewees are comedians, and because most of the worst things being discussed are in the past tense, they engage with their emotions in ways which are relatively light and funny. There's a tremendous amount of affection on display, not only from friends like Kyle Dunnigan and Sarah Silverman, but from the filmmakers themselves, who manage to avoid being exploitative while never shying away including moments that are raw or difficult to watch.

Tig manages to sort through the messiness of a tumultuous period in its subject's life without completely smoothing them out. While that's an admirable achievement, it also prevents the film from reaching much of a conclusion or a point of catharsis. It gets close, but stops just short, leaving it in a limbo between accepting that life is too complicated and strange to make easy conclusions, and trying to wrap up its story with some easy conclusions. It winds up feeling like a stand-up set in need of a great closer, but that shouldn't detract from how good the build up is.