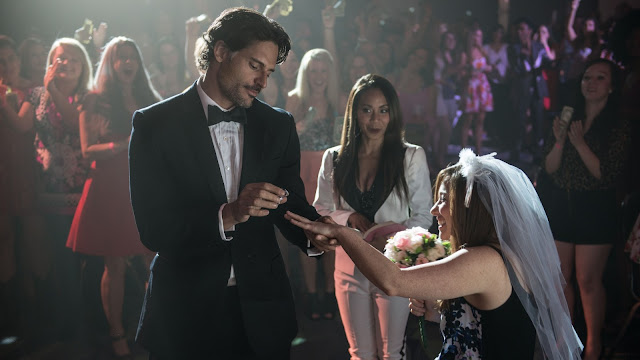 Magic Mike XXL is nominally a sequel to Magic Mike, but may be closer to a sequel to Magic Mike's trailer. Although the Steven Soderbergh-directed original was sold as an outrageous good time, it was actually a fairly downbeat examination of what a grind it is to escape the lower rungs of the socio-economic ladder. It featured a lot of stripping, obviously, but that was a somewhat incidental part of a story about someone (Channing Tatum) trying to scrape together enough crumpled ones to get his custom furniture business off the ground. There were dramatic stakes in the first film which allowed it to explore ideas of masculinity and the impact of The Great Recession, and these ideas were at the heart of the film, while the stripping providing an interesting milieu for them to play out.

The sequel, by comparison, puts the stripping front and centre. It's very much the Aliens of stripper movies, in that it takes a relatively minor element of its predecessor and makes it the focal point of its story. (This also offers the tantalising possibility that the third film will end with Channing Tatum sacrificing himself while dancing to Ginuwine.) Every wrinkle from the first film is removed within the opening ten minutes, primarily to explain the absence of certain cast members. The Machiavellian Dallas (memorably played by Matthew McConaughey) and The Kid (forgettably played by Alex Pettyfer) are revealed to have gone to Macau, leaving Big Dick Richie, Tarzan, Tobias, Ken and Tito (Joe Manganiello, Kevin Nash, Gabriel Iglesias, Matt Bomer and Adam Rodriguez) to fend for themselves. While they are at something of a loose end, Mike's business is going pretty well, although his girlfriend Brooke (Cody Horn) has left him between films. Straight away, returning screenwriter Reid Carolin's script removes the dramatic, economic and romantic tension that drove the first film, creating a more or less clean slate.

Yet even as it removes all the wrinkles from the first movie, Magic Mike XXL adds none of its own. It is so bereft of friction that the print may as well have been soaked in baby oil. That's not a criticism, necessarily, since the charm of the film lies in its unceasing dedication to offering nothing but a good time. The focal point of the story is that Mike heeds the Campbellian Call to Adventure (here represented by the more literal call of "Pony", which reawakens his love of gyration) and rejoins the Kings of Tampa in order to go to a stripper (sorry, "male entertainer") convention in Myrtle Beach, but there is little sense that this is a make-or-break proposition for the characters. They don't need to win the convention in order to keep their club open and their lives won't be irrevocably changed by the outcome. They're just going because it'll be a fun road trip and they might make a bit of money at the end of it.

When the characters do encounter obstacles, they can all be overcome by the power of dance or MDMA. There's bad blood between Mike and Ken, who feels betrayed by Mike leaving? All they need to do is drop some Molly and hug it out. Richie has a crisis of confidence when Mike suggests they come up with new routines? That's resolved by having him perform an impromptu routine in a gas station, aiding only by crisps, a fridge and some bottled water. The food truck they're traveling in has run off the road and landed their driver in the hospital? You can bet that a routine or two will get them where they need to go. The sheer force of their kineticism and positive attitude makes them an unstoppable, good-natured force for fun.

More than being good-natured, the film may very well be the most sex positive mainstream Hollywood movie in years. The film treats the sexuality of its characters equally, and it gives equal weight to the sexual desire of all its female characters. There are a number of scenes in the film where characters perform for women of varying body types, including ones which would not be considered conventionally attractive, and while the routines can be very funny because of how elaborate and exuberant they are, the women themselves are never the joke. Their desire is given as much validity as that of any of the other characters, and their pleasure - whether it is derived from having whipped cream explode all over them or from something less showy - is viewed through a completely non-judgemental gaze. Its vision of male stripping may be idealised to an insane degree, but ideals are things to strive for, after all.

The comedy throughout is lighthearted and banter-heavy, giving the sense that Magic Mike XXL is what Entourage would be if it didn't hate women. That isn't really the film's strength, but it is, like its lead, appealingly goofy. They're mainly pleasant filler between the dances, which are deliriously fun. They have to be, because the only way that the story works at all is if the choreography is so good that you can believe that all these obstacles will simply melt away.

Soderbergh may have ceded the director's chair to his long-time AD Gregory Jacobs, but he still shot, edited and produced the film, and in those capacities he gives the dancing an effervescent fizz and kinetic energy that allows the choreography to shine through. Magic Mike XXL is basically a musical in which no one (with the exception of Donald Glover) sings, and in which each number grows bigger and more impressive as the film builds to the convention, which is as ridiculous as you would expect a stripper (sorry, "male entertainer") expo to be. When a routine is set to "Closer" by Nine Inch Nails and it's only the third most ludicrous moment in a movie, you know you've entered a truly fantastical world.

Magic Mike XXL is almost completely lacking in depth or drama, but its boundless enthusiasm and desire to please is hard to deny. It's relentless in its pursuit of shallow pleasures, but what's wrong with a little shallow pleasure?