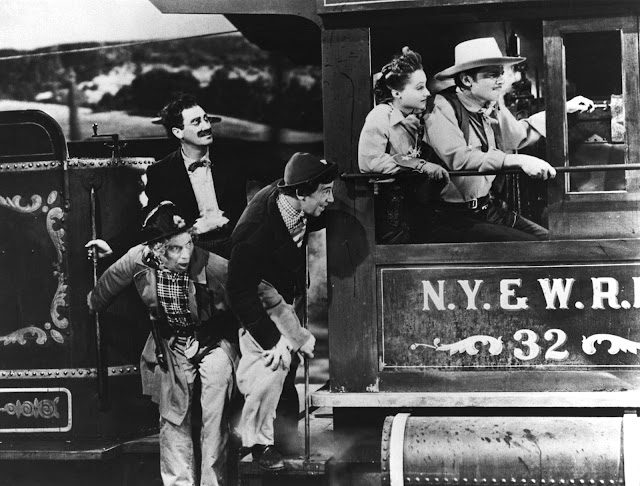 Mostly due to work commitments, this was a fairly quiet month for me in which I watched a mere 20 films, though at least they were all first time viewings. The only real thread in my viewing came towards the end of the month when, after recording a load of their films from TCM, I watched a string of Marx Brothers movies in a row. Through that, I have come up with a grand unifying theory regarding how to judge the quality of a Marx Brothers movie:


I didn't watch any legitimately bad films, but the least interesting was The Past is a Grotesque Animal, a documentary about Kevin Barnes and Of Montreal. It's a perfectly fine documentary and a good primer for the band, but it's a great example of a documentary which does little more than tell the story of an artist without offering any insight into why they are all that special. There's no sense that the film is offering more information than Kevin Barnes' Wikipedia page would.

It actually makes for a good contrast to the best film I watched this month...

I watch a lot of documentaries, and while the current commercial state of the form is probably the healthiest it's ever been, thanks largely to outlets like Netflix which make it easier for docs to get seen, most of them don't do anything interesting outside of the standard talking head/narration/animation mold. More filmmakers should learn from Ornette: Made in America, a biographical portrait of jazz composer Ornette Coleman which takes its cue from its subject, throwing together recreations, live performances, interviews, archive footage and fly-on-the-wall moments with a free associative fervour which mimics the rhythms and flow of his music. You may not get an exhaustive account of his life story, but you come away with a very clear sense of who he was and why he was important.

One of the most gleefully entertaining films of the year. A film with no friction, in which every problem can be overcome by dancing, and which prides itself (both textually and meta-textually) on delivering effervescent thrills. It's slavishly devoted to delivering a good time and it delivers, even if it removes even the merest trace of the social commentary of the first film. Best understood as the Aliens of stripper movies, in that it takes one relatively minor aspect of its predecessor and expands it to feature length.

My first viewing of a film from the filmmaker affectionately known as "Joe" and I was pretty much floored by it. In its woozy, vaguely menacing sensuality it's reminiscent of early Polanski (specifically Knife in the Water) but its rhythms are utterly unique. Weerasethakul lets the story of three people who find themselves out in the woods move slowly, with no real attention paid to the need for plot or story. It's more about capturing a moment in the lives of these characters which, while seemingly insignificant, will go on to have huge ramifications. In that respect, it's sort of like a Raymond Carver short story but with less drinking.

Arguably the best of the post-Zeppo movies, this one keeps the musical numbers and romantic subplot to a minimum and focuses primarily on the antics of Groucho, Chico and Harpo. The anarchy is pushed to the fore, and the typical final act action sequence is enlivened considerably by having it involve a thrilling and hilarious train chase which ends with the brothers destroying everything but the engine in order to have enough fuel. It also boasts a pretty great meta joke about Don Ameche.

It feels odd to describe a two and a half hour film with barely any dialogue and the thinnest of plots as thrilling, but that's the one word that came to mind throughout Tarr's swan song. The film's apocalyptic look at a world overwhelmed by environmental decay and the ways in which its two central characters struggle to survive, coupled with some of the starkest and most forceful cinematography I've seen in a while, makes it hard to look away. The end result winds up being simultaneously bleak and invigorating.

There's a lot to like about Ponsoldt's adaptation of Dave Lipsky's Although Of Course You End Up Becoming Yourself, a transcript of conversations he had with David Foster Wallace at the end of the promotional tour for Infinite Jest. On the most basic enjoyment level, it's a funny, lively road movie in which two intelligent men (with Jesse Eisenberg as Lipsky and Jason Segel as DFW) talk about their craft, getting laid, and the food they like, all while tensions and jealousy bubble under the surface. Beneath that, though, the film has a fascinating attitude to its own source material, since it largely portrays Lipsky as something of a creep, as someone who takes the agenda of an interviewer and goes a step further than seems ethical. While the filmmakers seem grateful for the spirited conversations they get to recreate, there's a decided ambiguity surrounding how some of the details were obtained, which adds a note of discord to a film which is already pretty spiky.

This documentary, in which a former hitman (or Sicario, hence the name) for a Mexican cartel sits in a hotel room where he had supposedly tortured and murdered people and talks about his past, may be the most terrifying film I've seen in a long time. Rosi does almost nothing to spice up the presentation, other than adding occasional shots of the area around the hotel to provide a sense of place. For most of its running time, the film consist of a man with his face covered talking about how he used to boil people alive and the extent to which the cartels infiltrated the Mexican police force, all with only a notebook and a marker pen, on which he makes helpful illustrations. It is a chilling and compelling look at the banality of evil.

It's not quite on the same level as Memories of Murder or Mother, but Bong's debut demonstrates that his ability to blend dark humour with smart character work and real thrills was there from the start. I do think that the fact that the story revolved around pretty nasty cruelty to dogs probably kept me from enjoying it as much as I would have if that wasn't something that legitimately upsets me, but the rest of the film was so good that I eventually managed to look past that.

One of the few films to genuinely earn the designation "dream-like", in that the next day I wasn't entirely sure if I had actually watched it. A lurid and hugely entertaining spin on the Western, it displays a love for artifice and a complete disregard for the standards of the genre that makes for a unique experience.

While it didn't hit the giddy heights of the third or fourth installments, the fifth film in the surprisingly robust Mission: Impossible series reaffirms its position as Hollywood's pre-eminent provider of crazy spectacle. Christopher McQuarrie brings the same hard-nosed humour that made Jack Reacher (which he wrote and directed) and Edge of Tomorrow (which he co-wrote) such pleasant surprises, and displays a real knack for finely orchestrated tension. The scene at the opera, an almost Hitchcockian set piece, is one of the series' best individual sequences since Tom Cruise dangled from a wire in the first film.
By Edwin Davies
Labels: 2015, august, comedy, drama, films, marx brothers, Mission Impossible, movie journal, Tom Cruise
Newer Post Older Post Home