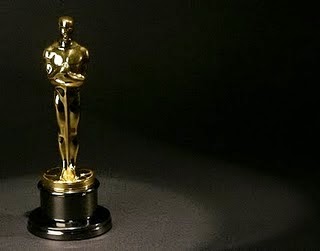 With the bloated body of the Oscar ceremony hurtling towards us at terminal velocity, now seems to be the best time to try and predict who will win. Usually I split these things up over two posts, but who has time for that noise? Below are my predictions, along with who I think should win in each category.

Best Motion Picture of the Year

At this point it feels like a toss up between Birdman or Boyhood for the top prize, and while I prefer the Linklater over the Iñárritu (and The Grand Budapest Hotel over all) it feels like Birdman's year. This is probably the one award I most hope I'm wrong about.

Again, I feel like this could just as easily go to Linklater as Iñárritu, but I think the Academy will recognise Linklater, both for the audacity of the experiment of making Boyhood and for his decades of great work prior to this year's breakthrough.

Best Performance by an Actor in a Leading Role

Should Win: None of them

There are some big absences from this category - David Oyelowo and Channing Tatum to name but two - and I can't muster up much excitement for the ones that made it. Still, I feel like the story of Keaton's win - much loved veteran performer who returns from years in the wilderness and finds glory and acceptance - is stronger than Redmayne's, and that could give him the edge. Like Picture and Director, this one feels a lot closer than I expected it to be even a few weeks ago.

Best Performance by an Actress in a Leading Role

Marion Cotillard for Two Days, One Night
Felicity Jones for The Theory of Everything
Rosamund Pike for Gone Girl
Julianne Moore for Still Alice
Reese Witherspoon for Wild

This is such a strong category that it's a shame it's become a one woman race. As good as Julianne Moore is in Still Alice, this feels very much like an award being given because she didn't win all the other times she was nominated (or "Winsletting" as I like to call it) rather than because it's the best performance.

Best Performance by an Actor in a Supporting Role

Will and Should Win: J.K. Simmons

It's not even worth pretending that anyone else has a chance against J.K. Simmons. Maybe after this he'll finally have the clout to get those pictures of Spider-Man he's always after.

Best Performance by an Actress in a Supporting Role

Will and Should Win: Patricia Arquette

Arquette was fantastic in Boyhood and is more than deserving of a victory. If nothing else, it will add an undue sheen of prestige to the ads for her new show CSI: Cyber.

Will and Should Win: The Grand Budapest Hotel

The screenplay categories have tended to become a place for the Academy to recognise interesting work in films that probably aren't going to do that well in the other big categories. Since neither Birdman or Boyhood look set to sweep, and both have scripts which are problematic (one for being too flashy, one for not being flashy enough) I think that Wes Anderson and Hugo Guinness will walk away with the Original Screenplay award. I'd be pretty happy about a Nightcrawler win, though.

Best Writing, Screenplay Based on Material Previously Produced or Published

There was some controversy when it was announced that Whiplash was being entered in for Adapted instead of Original due to a technicality (in brief: the screenplay was completed and Damien Chazelle shot a scene as a way of attracting financiers; that scene screened at festivals and won some awards so the Academy counted it as a separate short and said Whiplash was based on that short, even though it was just an extract from a larger screenplay) but it will probably benefit the film since it seems like it has the right balance between being interesting and accessible, whereas its competitors are one or the other.

Inherent Vice should win, though, both because Paul Thomas Anderson should have won something by now and because I can think of nothing harder than adapting Pynchon for the screen, especially compared to the nominees whose job consisted of sanding down the edges of complicated lives while Anderson embraced chaos and complexity.

Will Win: How to Train Your Dragon 2

Should Win: The Boxtrolls

Full disclosure: I've only seen two of the nominees, though I'm hoping to finally catch up on Princess Kaguya this week, so I can't say if the other three deserve to win more than the two I've picked. Of those two, I think that HTTYD2 has the greater momentum, even if The Boxtrolls is more visually and thematically adventurous. Of course this means that Song of the Sea will win now.

Will and Should Win: Leviathan

This seems like a perfect choice for the Academy since they get to recognise a great film and use it as a chance to score political points by rewarding a film which is heavily critical of contemporary Russian politics. Not that the Oscars ever give awards to films solely for political purposes (Michael Moore shifts uneasily in his seat.)

I usually root for Roger Deakins in this category, but if he won for his work on Unbroken it'd be one of the more shameful examples of Winsletting in living memory. I'd be happy with Lubezki winning for his ambitious work on Birdman, but Yeoman's shifting aspect ratios and ability to capture the mood of different time periods through subtle differences in colour and composition won my heart.

The massive headache of editing Boyhood will probably help it over the finish line, and Sandra Adair and her team did phenomenal work assembling the film in such a way that it felt tonally consistent despite the years of production, and for ensuring that it had a rhythm and pace that matched its low-key slice of life storytelling. However, Whiplash was the sharpest edited film I saw last year, and that final sequence would have been much diminished without the stellar work on display.

Will and Should Win: The Grand Budapest Hotel

Say what you will about Wes Anderson's quirks: his films look fucking fantastic.

I feel like this one will go to the most extravagant work, and Maleficent definitely had extravagance, even if it didn't have much else.

Best Achievement in Makeup and Hairstyling

Will and Should Win: Guardians of the Galaxy

This is a weird collection of films to pit against each other (though you could say that about the entire concept of giving out awards for art) but I think that the film with the most extensive and inventive makeup and hairstyling will win out. The only possible obstacle to Guardians of the Galaxy might be Dave Bautista and Groot's lack of hair.

Alexandre Desplat is an Academy favourite (these are his seventh and eight nominations since 2007) but two nominations will probably split the votes to his detriment. That leaves the field wide open for Han Zimmer's score for Interstellar, which was just about the only part of that film that was clearly audible throughout.

Should Win: The Lego Movie

It's a crying shame that Selma will only win for Best Song when it should be recognised for so much more. In an ideal world, it'd clean up elsewhere and allow "Everything is Awesome" to take this one, but sadly this world is less than ideal.

Should Win: Who cares?

Christopher Nolan's films tend to get ignored for everything except their technical aspects, and while the many complaints and jokes (like the one I made earlier) about Interstellar's occasionally muddy sound could count against it, Nolan's assurances that it was all intentional could provide a decent enough smokescreen for victory.

Will and Should Win: Guardians of the Galaxy

This category has basically become the ghetto for films that audiences actually saw, so I'll defer to the marketplace and go with the film that was the most successful (it doesn't hurt that the film in question also boasted visually stunning effects and created an entire galaxy of fun for people to get lost in).

Will and Should Win: Citizenfour

If Citzenfour doesn't win, it'll really mess up HBO's synergy since they're airing the film the day after the ceremony. And when you mess with HBO's synergy, they send The Mountain after you. I don't think the Academy want their heads squished like rotten fruit, so they'll probably go for Citizenfour.

Predicting these three categories is always pretty arbitrary since I haven't seen any of them, so I'll predict winners based on the same specious reasoning that I assume drives the decisions of the average Academy voter: