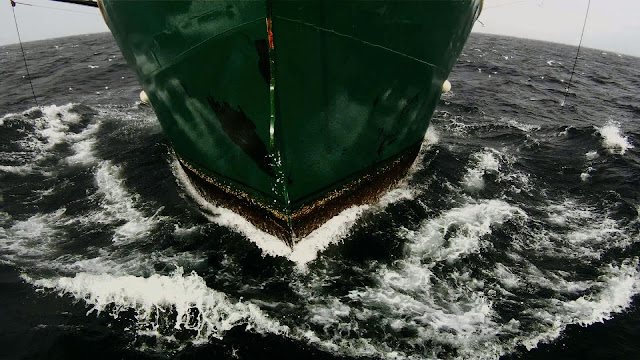 Lucien Castaing-Taylor and Verena Paravel's Leviathan achieves something very interesting; it's an abstract, impressionistic work which also manages to be a concrete depiction of reality. Set on an American fishing vessel, the film takes the cinéma vérité approach of The Maysles Brothers and Frederick Wiseman to the nth degree by not only recording the actions of the fishermen with no explanation, but placing miniature cameras on people and objects throughout the ship, capturing life on board from a myriad of intriguing angles. This approach allows the directors to not only give us a first-person perspective of what it is like to work on a trawler, giving an intimate view of what is involved in surviving hundreds of miles away from land, but also to show what life on the trawler looks like from the point of view of the captured fish. This makes for an experience which is, thanks to the amount of blood and guts on display, quite literally visceral, as well as one which at times resembles Hostel for fish.

It feels somehow wrong to describe Leviathan as a documentary. While it certainly documents a real-life situation, it's so lacking in context, and so keen in its focus on action rather than explanation, that it is closer to a recreation of an experience than a retelling of an event. There are no interviews in the film, and what little human speech is included is often muffled and unintelligible thanks to the sounds of the boat, and none of the crew emerge as 'characters' in the way that occurs in even the most loose documentaries. (Most don't even appear on screen, instead acting as cameras themselves.) It's clear from very early on that Castaing-Taylor and Paravel are not interested in telling the audience what life is like on a fishing boat, but keenly intent on showing them what it is like.

This initially makes for a very disorientating viewing - much of the first sequence, in which a catch is brought in under the cover of darkness, is incredibly difficult to make out, and scenes shot underwater are murky at best - and a lot of people won't get on board Leviathan as a result. There's no anchor for people to hold on to in order to orientate themselves; the film throws them into the deep end and expects them to swim, yet doesn't really care if they sink to the bottom.

Crucially, there is no easily discernible moral or philosophical viewpoint being expressed on the part of the directors. They do not seek to expose or examine the particulars of the fishing industry, nor do they seek to use the crew to make a broader point about humanity. Their aim is merely to observe and depict, not provide judgement or context, and in doing let the audience make their own minds up. For instance; if you harbour strong views about animal cruelty, it's entirely possible to interpret the scenes of fish being chopped up as indictments of the action itself, but the filmmakers never offer any confirmation one way or the other. This isn't necessarily a weakness - Lord knows there are far too many instances of documentary filmmakers coddling their audience - but the fact is that Leviathan really won't be for most people.

Yet for the people who do chime with the film's sensibilities, Leviathan is a very rewarding experience. While you won't learn anything about the state of the North American fishing industry - there really is no sense given of anything outside of the confines of the ship - you'll learn a great deal about what it's like to actually be on a ship being battered by the elements. The choices Castaing-Taylor and Paravel make turn the film into a kind of holistic document, showing not just the experiences of the men on the ship, but also the fish, and even the ship itself. Key to this is the sound design, which is immaculate, and really captures life onboard in all its squelchy glory. It describes the sensory experience of life at sea in a manner which is incredibly intuitive, and conveys the sights, sounds and smells of the ocean beautifully. You get the feeling that the only way that the feeling of being there could be heightened would be through the use of Odorama cards.

There's also something faintly menacing about the film, even though nothing overtly threatening occurs (though that probably depends on whether you're a fish or not). The omnipresent sounds of the sea and internal workings of the boat are inescapable, and they give the film a very claustrophobic feeling that is hard to shake. The atmosphere of Leviathan is dreary and uncomfortable, and far more likely to induce queasiness than the mere rocking of the waves.

The film also has an oddly hallucinatory quality to it which is quite beguiling. The camera placement makes the mundane activities of the fishermen feel alien, especially since details and information are pointedly left offscreen, further the sense of disorientation and inviting the audience to imagine what is happening based on the sounds around them. There's also a strong emphasis on letting scenes play out far longer than they might do in a traditional documentary, really giving a sense of the grinding monotony of living and working at sea. There are a number of scenes of the fishermen hacking and gutting their catch, scenes which are incredibly ugly, and only get ugly as time goes on, yet they acquire a strange, hypnotic grace through sheer repetition. There's an almost meditative quality to the film, albeit one which is marked by violence and death.

Less a film than an art installation that happens to be in cinemas, Leviathan is an impressive, absorbing experience that pushes the idea of what a documentary can be to its very limits. Often brutal and ugly, it also finds beauty amidst the blood and water, and manages to make repetition quietly poetic. It's by no means a film that everyone, or even most people, will care for, but it's a singular and bizarre vision that has to be seen to be believed.