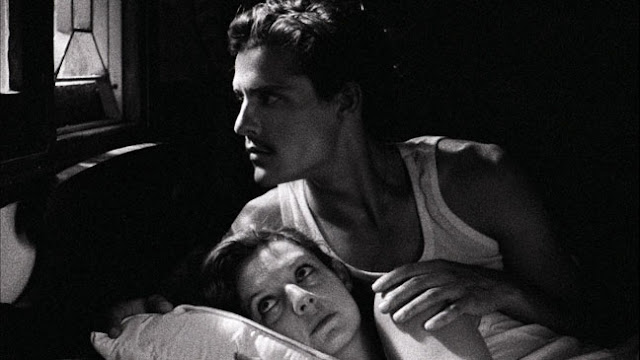 Shot in gorgeous black-and-white and, at least initially, set in Lisbon between Christmas and New Year, Miguel Tomes' Tabu introduces us to three women; Pilar (Teresa Madruga), Aurora (Laura Soveral) and Santa (Isabel Muñoz Cardoso). Pilar is kind to a fault, and she dedicates her time to helping people, either through actions or through prayer. Despite her kindness, her life seems sad and unfulfilled, an idea which is never spoken of, but which Gomes illustrates - in the best moment of the whole film -  by showing Pilar quietly sobbing in a cinema. Pilar is a fascinating character whose unspecified melancholia colours the entirety of the first half of the film, which is appropriately titled "Lost Paradise" (though this title has a more specific meaning in relation to the second half of the film, it also speaks to Pilar's nostalgia or pining for something she can't articulate).

However, Tabu is not really Pilar's story, but that of her neighbour, Aurora. We first meet Aurora when her nurse, Santa, calls Pilar to inform her that she has gambled her money away at a casino and that Pilar needs to come down to help her out. Dressed like some lost and faded Hollywood starlet, Aurora is introduced in a truly mesmerising scene in which she relates a dream to Pilar, all the while the slightly out of focus casino background appears to revolve. This creates an hypnotic effect that amplifies the telling of the dream, which is a fairly innocuous thing about monkeys, love and gambling but which becomes more important because of the setting and because of what it causes Aurora to do.

After firmly establishing the separate sadness of these two women - and, in particular, the state of senility into which Aurora has fallen, evidenced by her continued insistence that Santa is a witch trying to put a curse upon her - the film shifts tack completely, and moves the action from contemporary Lisbon to colonial Africa, in a section entitled "Paradise". There, a young, newly married and pregnant Aurora (Ana Moriera) falls in love with a man named Ventura (Carloto Cotta), and the two engage in a relationship which, as we know from seeing Aurora's later life, can only have dire consequences. Their love plays out on the mountain of Tabu, a name which doubles as playful flourish considering the taboos which the two engage in breaking.

Whilst the second half of Tabu is charming and quaint in its own way, it is decidedly less interesting and engaging than the first half, primarily because the characters and the story, despite the poignant air of tragedy that hangs over everything, are not terribly interesting. The film follows a very standard tragic romance from hopeful beginning to crushing disappointment, leaving no tried and tested idea untouched, with occasional moments of deadpan humour thrown into liven things up. What distinguishes Tabu is Gomes' decision to have the entirety of the second half of the film play out without any diegetic dialogue, instead having the story be told by a narrator. This mimics the style of a film that we see Pilar watching at the start, one which was also set in Africa, and since she is the one hearing the story it's easy to see that the presentation is shaped by her understanding of Africa and these sort of romances. There's not much grit to the tale, more of a swooning romanticism finely honed from countless hours sat marvelling at Hollywood tragedies.

Yet these choices ultimately hurt the film since the central romance is so banal. There's no surprise to it, and not merely because we have some idea how things are going to end up, but because there's no spark to the story. No real invention. It all unfolds as you would expect, with nothing to distinguish the film from the sort of stories that it imitates. In an instance of technique being far superior to the story being told, Gomes' obvious mastery of the form means that it distracts from what is meant to be the emotional core, ultimately turning "Paradise" into a dry and intellectual experience. Even the moments of humour throughout, such as infrequent musical performances, only serve to highlight how little else is happening in the story. This stands in stark contrast to "Lost Paradise", which is so rich and evocative in its sadness that the beauty of the image itself is an enhancement rather than a distraction.

Whilst flawless on a technical level, Tabu is a film to be admired rather than loved, or even enjoyed. The sheer beauty of its imagery and music, not to mention some incredible performances, ultimately can't hide - in fact highlight - the sheer ordinariness of its story. Whilst charming, and sometimes beautiful, it ends up being too dry an experience to engage emotionally, which is an insurmountable hurdle for a romance.