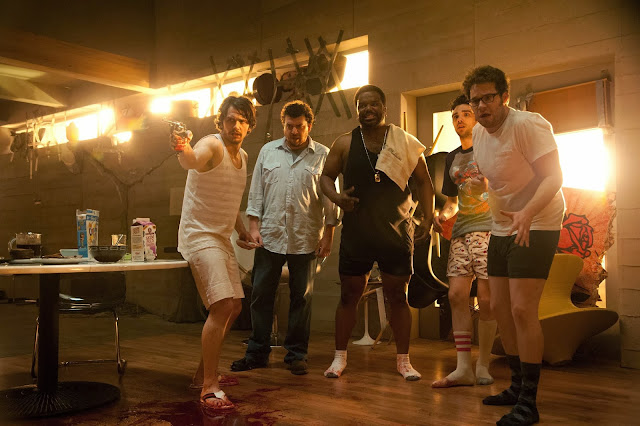 For a movie that features violent dismemberment, a prolonged discussion about proper masturbation etiquette and a version of the Devil who sports a massive penis, This Is The End is a weirdly moral film. Its story begins with all the good people on Earth being spirited away by the Rapture, then proceeds to show that its cast of privileged, self-involved movie stars (all of whom play versions of themselves) have been left stranded in a Los Angeles consumed by fire and overrun by demons because they're deeply flawed, awful people. It has a very Old Testament view of the world, one in which God most definitely exists, and he is very, very disappointed in you.

Before the ground opens up to swallow the likes of Aziz Ansari and Rihanna, though, This Is The End begins with Seth Rogen picking up his friend Jay Baruchel from the airport. The two haven't seen each other for a while, and the purpose of the visit is so that they can reconnect. That initially takes the form of them falling back into old habits - represented by Rogen abandoning his juice cleanse at the earliest opportunity - and getting incredibly stoned. It's at this point that Rogen suggests that they head to James Franco's housewarming party over Baruchel's protestations that he either doesn't know any of the people there or, in the case of Jonah Hill, actively dislikes them. But since they're meant to be hanging out together, the two make their way to Franco's custom built, fortress-like new home. Once people start dying en masse, they hold up with Franco, Hill, Craig Robinson and Danny McBride, and try to figure out how to survive the apocalypse, as well as how to put up with each other.

This Is The End initially pinballs between a number of disparate tones that make for an incredibly odd viewing experience. The low-key, easy rapport between Rogen and Baruchel gives way to some very broad satire about how weird people in Hollywood are - or how weird James Franco is, at least - before being steamrolled by the sudden outbreak of effects-heavy, bloody violence, as people are crushed by falling buildings or are swallowed up by the ground itself. Seth Rogen and his writing partner/co-director Evan Goldberg handle each of these tones well (though some of the effects in the scene where nearly every cameoing celebrity dies look surprisingly sloppy, verging on cheap), but the shifts are so jarring that it makes for a disorientating experience.

After the central sextet have been isolated in Franco's house, though, the film settles down and starts to mine a rich, heady vein of meta-textuality, with added dick and fart jokes. While only Michael Cera gets an opportunity to really mess with his established persona by playing a sex-crazed, coked up version of himself, everyone else gets the opportunity to take one aspect of their personality and push it to the limit. Baruchel is self-righteous and wary of his more successful friends; Rogen is an amiable stoner; Franco is an obtuse artist with seemingly no sense of quality control; Hill is a worryingly nice guy with a passive-aggressive streak; Robinson veers rapidly from genial to apoplectic; and McBride is Kenny Powers without any need or desire to redeem himself.

There's a strain of self-awareness and commentary to these performances as the characters repeatedly assert that their celebrity and fame will save them from whatever is happening, even though it has left them so cloistered that they are utterly unprepared for their situation, but the approach mainly serves as an opportunity to place these disparate personalities in one place and have them spark off each other. It's in these scenes that This Is The End is at its strongest, as the cast riff on each others' past work - McBride, in particular, has a great, blistering monologue in which he tears into each of his co-stars by beating them with their worst projects - and there's a loose atmosphere that both complements, and is nicely punctured by, the moments when the apocalypse intrudes on the increasingly fractious group's bickering and infighting.

Amidst the more caustic elements, which occasionally go too far in their abrasive meanness (such as one spectacularly uncomfortable scene in which the characters discuss the "rapey" vibe of their situation) the central relationship between Jay and Seth remains a source of genuine pathos, and ultimately grounds the indulgent referentiality in something more tangible. The idea of friends drifting apart as one becomes considerably more successful than the other is an interesting one, and it's one that offers a strong core for the film to build its stranger, indulgent elements around.

Even with that in place, This Is The End is one of the messiest, most gleefully weird mainstream comedies in recent years, one that has plenty of laughs, but also a deeply personal quality. As far as expressions of doubt about whether or not you're a good person go, it's an odd one, but that doesn't make it any less heartfelt, even if its earnestness takes the form of profanity, violence and phalluses.