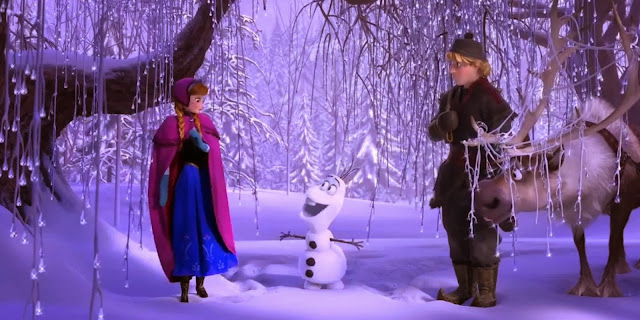 Elsa (Idina Menzel) and Anna (Kristen Bell) are a pair of princesses who have spent most of their lives living within the walls of their castle in the kingdom of Arendelle. Unlike most cases of princesses being kept hidden, they've been kept there for a very good reason; Elsa has the power to control and manipulate ice, and when they were children, Elsa nearly killed her younger sister while the two were playing. Afraid that she might  hurt her again, Elsa retreated into the castle to protect herself and Anna while the people of Arendelle went about their lives. As Elsa comes of age, the gates of the castle are thrown open for her coronation, to her dread and Anna's palpable delight. Things quickly go awry, and Elsa flees the kingdom, accidentally leaving it frozen in her wake. It falls to Anna, along with the ice trader Kristoff (Johnathan Groff) and his adorable reindeer Sven, to coax Elsa back to civilization before Arandelle is destroyed by the winter, or before the Duke of Weselton's (Alan Tydyk) men find her and seek to end the cold by ending her life.

Tonally, musically and aesthetically, Frozen feels very much like a follow-up to Tangled, Disney's excellent spin on the Rapunzel story. As with that film, Frozen takes an established fairy tale - Hans Christian Andersen's "The Snow Queen," in this instance - and injects it with a lot of energy and a fair number of smart gags that make it feel modern and fun, but without falling entirely into the pit of postmodern smugness that afflicted some of their early '00s films. There's a terrific, romping energy to the story as it barrels through Anna and Elsa's traumatic childhood, past the coronation and gets to the business of Anna and Kristoff's quest with nary a second wasted. It has a spirited tone of high adventure, one which is conveyed brilliantly by Christophe Beck's stirring score.

In addition to the dynamic between Anna and Kristoff, a familiar case of a reluctant partnership that changes into something more through shared adversity, the driving force of the film is the relationship between Anna and Elsa. At its core, it's a story about two people who love each other deeply, but who are separated because one is afraid that they'll hurt the other, and the other is hurt because they don't understand why they are no longer as close as they once were. (It's briefly explained that all Anna's memories of Elsa's magic had to be erased in order to help protect her.) Yet Anna discovering Elsa's secret only drives them further apart, as Elsa goes all Dr. Manhattan and constructs an ice palace on an incredibly high mountain, then creates a giant snowman to act as her guard. It's interesting seeing Disney tell a story that, for much of its running time, depicts its antagonist as someone who is actually a good-hearted person, just one who is afraid that they'll hurt others, and the relationship between Anna and Elsa is genuinely touching thanks to the empathy it displays for both.

There's plenty of other really good stuff on the margins around the central story, particularly in terms of the film's humour. It feels a little bit forced in the early going as the screenplay by Jennifer Lee, who also co-directed with Chris Buck, tries to balance the slightly convoluted set-up with introducing the disparate characters. Once Anna sets out, though, the film settles into an agreeably funny groove, with plenty of nice badinage between Anna and Kristoff, cute slapstick involving Sven, as well as some oddball supporting characters like a Swedish shop owner and Kristoff's adoptive family of magic trolls. The main comedic focus of the film is Olaf (Josh Gad), a tiny living snowman who can't wait to see what happens to snow when summer comes around. Olaf initially seems like a stereotypical, slightly annoying character added purely to keep kids amused, but he actually serves as an outlet for some genuinely weird comedy, much of which revolves around him being dismembered and remaining relentlessly cheery about it all.

While it doesn't quite match up to the heights that Tangled managed - it doesn't have any sequence as singularly beautiful as that film's Chinese lanterns scene, and it gets a bit messy in its final act - Frozen is a funny, sweet and charming entry into the Disney canon. It's gorgeous to look at, has some really funny, unusual jokes and works hard for its moments of catharsis. It also boasts some of the best songs in a Disney musical for some time, with Elsa's showstopper "Let It Go" seemingly destined to become a classic. It's an all-round good, occasionally exceptional animated film that is perfect family fare.