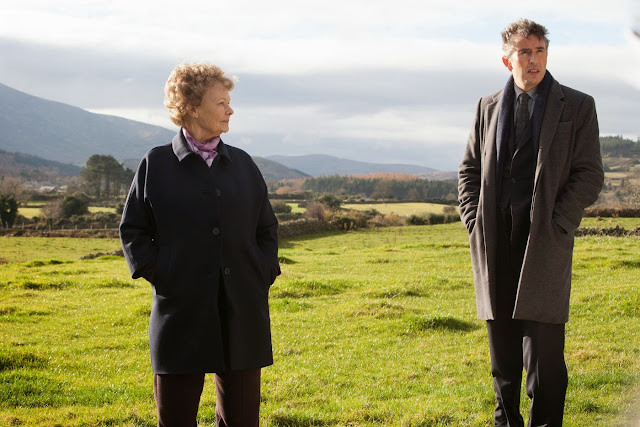 Stephen Frears' Philomena is a textbook example of how a strong story and a great performance can overcome pedestrian filmmaking. Judi Dench stars as the eponymous character, an Irish woman who had a child as a teenager and was sent away to work in a convent. While there, the nuns sent Philomena's son Anthony away to be adopted against her wishes, and she has kept it a secret for nearly fifty years. When she finally opens up about her past to her daughter, Philomena's story comes to the attention of Martin Sixsmith (Steve Coogan, who also co-wrote the screenplay), a journalist and disgraced government official who agrees to find out what happened to Anthony so that he can turn it into a magazine article, despite his reservations about doing a human interest story, which he characterises as being stories about weak-minded, ignorant people read by weak-minded, ignorant people.

Based on a true story that the real Martin Sixsmith later turned into a book, Philomena's story is best left undiscussed because it takes some genuinely surprising turns, ones which, in a rare display of tact from a movie studio, haven't been completely spoiled by the marketing. The central investigation wends its way through many of the expected beats of a story of this kind, including returning to the convent to quiz the nuns about Anthony's whereabouts and allow Philomena to relive the trauma of watching two strangers carry her infant son away. (Something which Frears over-eggs by repeating dialogue from earlier flashbacks, doing a tremendous disservice to the great, subtle work Dench does in showing just how difficult it is for her character to return to a place of such tremendous pain.) From there, the two pursue other avenues of inquiry which gradually lead them to Washington, where Martin's past life as a political correspondent help them get ever closer to the truth. After that, things go in unexpected directions, and should be left unremarked upon.

As their journey takes them further and further afield, Philomena and Martin develop a warm friendship, and the film has a light, convivial tone, but their dynamic is charged by the way in which they become increasingly at odds over their own responses to what was done to her. Martin, a lapsed Catholic and affirmed atheist, is incensed at the way in which Philomena and Anthony were separated, as well as the way that the nuns covered up and stonewalled any attempts she made to find out what happened to her son. Coogan's strength has always been in playing characters who can barely hide their disgust for others, despite being faintly ridiculous figures themselves. His version of Martin Sixsmith comes across as a self-righteous, superior and pompous man riddled with cynicism, yet he also seems genuinely outraged by what he learns of Philomena's life. He doesn't step too far outside of his comfort zone, generally playing the part by turns wry and weaselly, but Coogan gets to deliver a line towards the end of the film which manages to be both one of the funniest and angriest I've seen in a film this year, and that's no small achievement.

In contrast to Martin, Philomena views the separation with a calm grace that is deeply rooted in her faith. As a film, Philomena thrums with barely suppressed rage at the very notion that it was once considered acceptable to forcibly separate women from their children - at least in the cases of the ones who managed to survive giving birth in a convent - all in the name of doctrine. Yet while it takes a dim view of the evils that are carried out by people who consider themselves righteous, and the organisations that allow such people to exist, it's much more measured in its view of faith in general. That approach is embodied by Dench, who gives a quiet, moving performance as someone whose faith has sustained her throughout her life, even as others who belong to the same Church have done awful things to her and her family.

Dench's turn as Philomena is a beautiful illustration of how a quiet, measured performance can have a tremendous impact when used correctly. There's a nice balance between funny moments in which the mismatched partners are at crossed purposes, and small, devastating moments in which Philomena talks about how she just wants to know that someone loved her son, and if he ever thought of her. There is a slightly misjudged tendency for Frears to turn scenes of introspection into ones in which people just stare off into the middle distance, but Dench is able to say so much with a slight twitch of a cheek that she redeems the film in the times when it doesn't knowing how to convey what its characters are thinking.

Though Philomena stumbles occasionally when it tries to grapple directly with depicting the inner life of its lead and is a touch too heavy-handed when it comes to having people discuss the nature of God, it's a charming, well-meaning and ultimately moving film about faith, forgiveness and the past. It treats the beliefs of its characters seriously while retaining a light touch, and it makes its anger felt without feeling forced or self-righteous. Coogan and Dench make for an appealing team, but it's the latter half of the partnership who really dominates the film thanks to her admirable restraint and empathy. It's a competent film built around a strong performance, but when the performance is this good, the workmanlike nature of the filmmaking is easily forgiven. At least, more easily forgiven than other things I could mention.