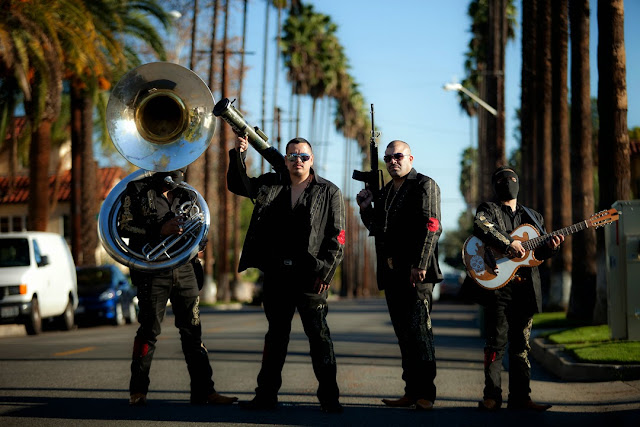 Between 60,000 and 100,000 people have been killed in the 7 years since the Mexican government under Felipe Calderón declared war on the powerful drug cartels which have increasingly come to dominate parts of the country. It's worth stating that figure up front, if only to stress the sheer enormity of the crisis facing the country, one which goes largely unreported outside of its own borders - or even within them, as evidenced by the dozens of journalists and bloggers who have been forced to flee the country or been killed for reporting on the cartels. Even then, that number doesn't do justice to the millions of people who have been displaced by the swirling violence, or whose families have been irreparably broken by the fighting. It's these kinds of stories that Shaul Schwarz shows in Narco Cultura, his blistering and eye-opening documentary about the war on the ground that offers little hope that the war will end soon or well, but certainly captures the feeling of what it must be like to live amongst the bullets.

Schwarz splits his time between two main threads, each casting the conflict in radically different lights. In the first, he follows several crime scene investigators in Ciudad Juárez, a city which had 3,622 reported homicides in 2010, making it one of the most dangerous cities on Earth. (On the other side of the border; El Paso, Texas saw just 5 murders in that same year, making it the safest city in the United States.) Although many of the detectives don't appear on screen - which is understandable, considering how dangerous it must be to investigate murders in a city which has an average of ten a day - they relate their experiences of processing crimes, as well as laying out just how few of them - less than 1% - are actually investigated once the bodies have been logged and identified, owing both to corruption in the system and the sheer number of murders being committed. They also relate their personal stories of receiving death threats, their colleagues being murdered, and their dreams of escaping the city to America.

Conversely, the other half of the film is set in America, primarily Los Angeles, and follows Edgar Quintero, a young man who writes narcocorridos. These are songs about the actions of the cartel members, or narcos, which paint them as heroic outlaw figures, emphasing their badassery and co-opting stories of violent dismemberment and turning them into tales of empowerment and inspiration. Schwarz shows the popularity of the corridos by following Edgar and Komander, one of the biggest corrido artists around, as they travel the country performing at sold out venues, as well as detailing the ways in which the genre has extended beyond music to encompass movies and merchandising. It's an interesting phenomenon; corrido artists use stories of violence and pain as a means of escaping from it and building a better life for themselves, at the same time glamorising the life that they work very hard to get away from. It's not surprising that a number of people in film compare corridos to gangsta rap.

By following the investigators around, Schwarz gets a vision of the drug war that is incredibly candid in its brutality. There's plenty of deeply upsetting scenes of dead bodies laying in the street (with at least one instance of a child being the victim) riddled with bullets as police lights flash incessantly, but Schwarz doesn't treat them salaciously. He's not trying to exploit the situation, but to capture its ugliness as clearly as possible. It's an approach that extends to many of his interviews; police, criminals and innocent bystanders, all give candid and starkly honest accounts of the violence they have witnessed or perpetrated. One interview, in which an imprisoned gang member recounts his feelings while beating a man to death, is particularly startling in its graphic physiological detail and how it lays bare the mentality of someone who has perpetrated horrendous violence.

Far and away the most affecting interviews, though, are those involving children. The film opens with a child saying he has heard that there are no murders on the other side of the border, and that he wishes that there were no murders in Juárez, in the same tone of voice another child might use to say "I wish it would stop raining." Shortly afterwards, Schwarz films several children at a crime scene recounting how a young man was gunned down in the street. Both are distressing not merely because they are instances of children talking about death and violence, but because they do so in such a matter of fact way. Narco Cultura does an amazing job of conveying not only how terrible the violence is in parts of Mexico, but also how a whole generation of people are growing up with it as an inescapable part of life.

The brilliance of Schwarz's work lies in the way he intertwines the two halves of his film. He shows how the increased violence in Mexico fuels the corridos by, for example, showing how Edgar researches Mexican websites to get details of real crimes for his latest songs, and even goes so far as to plan a sojourn to Mexico so that he can more accurately experience what he writes about, and also suggests that the popularity of corridos influences the actions of people in Mexico. It becomes a point of pride to do something worthy of a corrido, so it is imperative to do the most violent and disturbing things in order to be immortalised in song. It is a quite literally vicious circle that the film explores, and it does so with grim determination and rigour.

Although its intense focus on personal stories prevents Narco Cultura from providing a more wide-ranging view of the situation in Mexico, it is brutally effective as a piece of field reportage. It manages to convey desperation, futility and fear beautifully, while also making sure to show that there are plenty of people in Mexico who want the violence to end, but who maybe don't have any power to stop it any time soon. It's also an insightful bit of cultural anthropology, examining a musical and cultural niche that is largely shut out of mainstream US culture - unless you count the opening of that one episode of Breaking Bad. Narco Cultura is a fascinating and intense probe into the experience of the Mexican drug war, one that provides a much-needed focus on the individuals who make up those staggering and awful statistics.