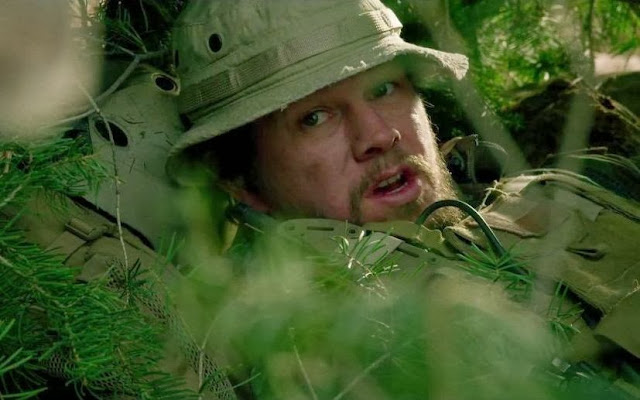 In June of 2005, four Navy SEALs were sent out on a mission known as Operation Red Wings. The objective was to kill Ahmad Shah, a local Taliban leader who had been coordinating attacks against U.S. and Afghani government forces. Within hours of being dropped into hostile territory, the team consisting of Marcus Luttrell (Mark Wahlberg), Mike Murphy (Taylor Kitsch), Danny Dietz (Emile Hirsch) and Matt Axelson (Ben Foster) had been ambushed, and the mission was thrown into disarray. Under heavy fire and with their communications disrupted, the four men had to fight for their lives. As the title of the film suggests, most of them did not survive.

At its best, Lone Survivor recalls the sort of lean, muscular action films that Walter Hill made in his heyday. It's especially reminiscent of Southern Comfort, Hill's relentlessly tense thriller about National Guardsmen who wrong a group of Cajuns and find themselves running through unfamiliar, hostile territory. As in that film, director Peter Berg takes time and care to establish who the characters are, that they are very good at their job (the film opens with a montage showing some of the hard training that the SEALs have to endure) and that they quickly end up in way over their heads. He never goes so far as to blame what happened on the possible hubris or incompetence of the men involved, which is unsurprising given that this is a real-life story in which real people actually died, but there is a definite sense that overconfidence and faith in their technological advantage played a part in both the planning and execution of the mission.

Given that setup, it's very possible to read the film as a metaphor for U.S. involvement in foreign countries in general, and Afghanistan in particular. There's a definite macho swagger in the early scenes that quickly disappears once things go wrong, and the mess that the four find themselves in is fairly analogous to what happened for the U.S. forces on a larger scale. However, the film itself doesn't seem that concerned with subtext, or if it is, it doesn't let it get in the way of its propulsive story, which barrels through with great vigour and momentum. If Lone Survivor has a broader point to make about the U.S. military, it's subservient to its story of four men stuck in very dire circumstances.

It's also in part a study in caprice, and how even something as complex as a mission carried out by Navy SEALs can be undone by something as small and insignificant as a herd of goats. In some ways, the film is an examination of decisions and consequences, and how even the most sound and logical choices made on a battlefield can have the worst possible results. The situation the SEALs find themselves in is a truly horrendous one, but what's even worse is that you feel as if they made the right calls and it still wasn't good enough to save them.

In establishing who these men are, Berg doesn't dwell too much on the background details. There are a few conversations in which they discuss their lives back home, but these mainly serve as a means of establishing the close bond that they share with each other. The focus is firmly on moving the story forward, and on getting them on the ground so that they can begin their ill-fated mission. It's admirably restrained in this regard, as it delays the first firefight between the SEALs and the Taliban until the halfway point, building suspense right up until the first bullet is fired. At that point all hell breaks loose, and the considered character building of the first half gives way to a second that is a series of running battles and quiet interludes seamlessly bleeding into each other. It's a great exercise in building pressure, then releasing it in one long, concerted burst.

The action scenes are superbly handled, maintaining a good balance between visceral intensity and spatial awareness that is largely absent from a lot of mainstream action films. Berg and his team create a sense of space, let us know where everyone is and where they need to be, then zooms in to capture the pain, fear and impact of each shot. The sequences are fluidly paced, allowing them to switch from Zulu-esque moments of fighting from stationary positions to rapid retreats and cat and mouse sniping with ease and grace. Most importantly, he never loses sight of his characters, working in quiet, sad moments in the middle of often oppressively tense battles, and showing the toll that each injury has on the SEALs as the tide slowly turns against them. They are presented as heroic figures, but they're ultimately human, and many of them succumb to that fact by the end of the story.

The performances across the board are very solid, with the typically excellent Ben Foster on great form, Emile Hirsch doing fine work, and Taylor Kitsch coming closest to conveying the same depth of emotion that made his work on Friday Night Lights so revelatory. Wahlberg is the standout, though that is at least partly because he's on screen the longest. As the survivor of the title - a fact that is established in the very first scene - he is the only character who gets to make it to the end, and as such has more opportunity to play different moods.While he leans heavily on the quiet, jocular persona that has become his trademark in the early going, he also gets to plumb some darker depths as more and more misfortune befalls him. One particular scene, in which Luttrell is so overcome with fear and rage that he comes close to blowing up everyone around him, including himself, with a grenade, sees him play a kind of nihilistic desperation that Wahlberg has never had opportunity to play before.

While there is much to admire about Lone Survivor as a visceral and thrilling action movie, it never rises to being exceptional. Much like Berg's earlier thriller The Kingdom, it tries to eschew politics in favour of telling a straightforward story, and while that makes for a relatively breezy take on the war in Afghanistan, it also feels simplistic and naive. Its depiction of the SEALs as flawed people and the Navy as prone to fatal errors in judgement and organisation ensures that it doesn't lapse into jingoistic propaganda, but it's also very black and white in its handling of the situation on the ground. Its depiction of the Taliban is fairly standard, mad and screaming stuff, and even the good Afghans are treated very superficially, with their motivations only being relayed in text that appears prior to the credits. (And right before a montage of footage of the real SEALs set to Peter Gabriel's cover of "Heroes" which, while well-intended, feels at odds with the movie that preceded it.)

Then again, that approach is in keeping with the idea of Lone Survivor as a recreation of Luttrell's subjective experience, which is one of being shot at, and helped, by people whose language he did not speak. In that respect, Lone Survivor works very well as a lean, tense attempt to depict one man's struggle to survive, even if that approach is fairly myopic in terms of its broader context.