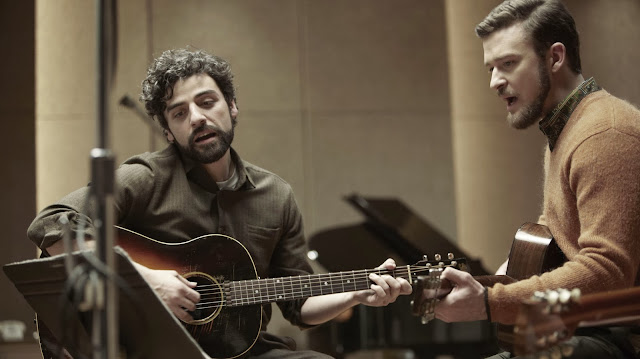 From its first scene, in which its title character suffers a beating at the hands of a shadowy, unknown man, Inside Llewyn Davis is a disorientating, darkly funny and quietly menacing experience. Set in and around the Greenwich Village folk scene in 1961, it covers a week or so in the life of Llewyn Davis (Oscar Isaac), a folk singer who is perpetually broke, and spends pretty much the entirety of the film shuffling through the brutal New York winter, trying to bum a cigarette or grab a night's sleep on a couch from anyone he can, all the while hustling to get a few dollars together. As he pinballs from crisis to crisis, most, if not all of which are problems of his own making, he contemplates his sputtering career, failed relationships and dying friendships. Oh, and there's a cat who figures in there somehow.

Following the staggering commercial success of True Grit, Joel and Ethan Coen have done what they have done throughout their career; whatever they feel like doing. As is so often the case with the Coens, who have spent nearly thirty years jumping from genre to genre with consummate ease, Inside Llewyn Davis doesn't feel much like anything they've made before. There are echoes of their past work, certainly; the dialogue has that barbed, zippy quality that typifies their best films, the numerous musical performances (as well as a few references to The Odyssey) recall O Brother, Where Art Thou?, and the formless, often surreal quality of some of Llewyn's story has that Barton Fink feeling about it. Yet while it is possible to draw lines from their other works to Inside Llewyn Davis, the way in which they are combined feels unique and distinct, even within a back catalogue made up primarily of unique and distinct films.

The Coens version of Greenwich Village is a place both bristling with energy and creativity yet utterly bleak and desolate. Part of that comes down to the way in which cinematographer Bruno Delbonnel captures the chill of the season, using colours so muted they're practically silent to create an atmosphere so barren and wintry that it practically lowers the room temperature in the cinema itself. But it also stems from the specific point in cultural and social history that the film explores; a time when the creative forces that would soon break forth and overwhelm music, art and film were simmering, but not yet boiling over, and nascent rebellion was still only nudging against entrenched repression.

Over the course of the film, Llewyn meets a number of characters - some odd, some sinister, some a mixture of the two - that represent different vantage points on this cultural powder keg. From a clean-cut Army type (Stark Sands) who plays guitar on the side to an old jazz musician (John Goodman) with nothing but contempt for folk, they all exist as fixed points in an era of constant flux. People like Llewyn, who desperately want to do something, but have no idea what, seem more vibrant and alive than those who are more settled (he even says as much to Jean (Carey Mulligan), a friend who has gradually grown to hate him) but also more lost and alone. There's something alluring and romantic about the way he manages to scrape by with his music and sheer pluck, but there's also no more sad and lonely image than Llewyn Davis trudging through snow, carrying a guitar in one hand and a bag with everything else he owns in the other, trying to find somewhere to sleep.

Llewyn is an interesting protagonist in that he feels like a supporting character in someone else's unseen story, or even a supporting character in several other stories. Not only is he a marginal figure on the folk scene - the character was based on the influential, but relatively obscure Village musician Dave van Ronk - and someone who was a bigger deal when he was part of  a duo (that wasn't that big to begin with), but he always seems to be on the edge of much bigger events. Early on in the film, he takes part in a recording session for a novelty record called "Please, Mr. Kennedy" written by his friend Jim (Justin Timberlake). The session goes by quickly, and the song itself is a lot of fun, but after it has been recorded it's forgotten about until someone casually mentions that it might be a hit. Jim's potential rise to stardom, even if it's as a one-hit wonder, plays out alongside Llewyn's own story, but it's one that takes place entirely off-screen. There are lots of other, bigger stories taking place around the edges of Inside Llewyn Davis, but Llewyn seems to miss out on them because he's unable to look beyond himself and his immediate needs. It's no coincidence that his most triumphant moment in the film seems destined to be remembered, if at all, as a precursor to someone else doing something much more significant.

Despite this, Llewyn does not feel minor or diminished, but instead proves to be an incredibly compelling figure. Even though he's rarely likable - in the aforementioned beating that opens the film, even though the character has only been on screen for a few minutes, you already feel that he probably earned it - he's never less than watchable, and that's down to Isaac's brilliant performance. Even though Llewyn is a man who lacks any direction or agency, and spends much of the time flailing from one place to the next with no plan or reason, he seems incredibly determined. It's an aimless determination, which makes his frustration and intensity both powerful and impotent, but Isaac does a great job selling the idea that the character is under constant pressure, even if he's just having dinner with friends. The Coens seem to take a slightly sadistic glee in heaping disaster on Llewyn, but his belief that he's meant to be somebody makes it utterly believable that he would soldier on in the face of everything that goes wrong. It also makes his efforts to keep going heartbreaking to watch.

At the same time, Isaac gets across the sense that Llewyn has something about him that draws people to him. He's a charismatic person, but also a very bitter, angry one, and you can see that in the way people open their hearts and homes to him, even past the point at which they should really have shown him the door. That balancing act between attraction and repulsion is best exemplified by Carey Mulligan as Jean, a woman who has more than enough reason to hate Llewyn, yet who still harbours some goodwill towards him, even if it was based on better times that are long gone. Jean's not a major character - though no one in the film is when compared to Llewyn - but Mulligan does great work suggesting layers of loss, pain and love beneath her reflexive, surface level anger.

The fractured, frazzled story, which seems to consist of corner pieces of several much bigger pictures, and playful surrealism might be a bit much for some, but they also make Inside Llewyn Davis fascinating. It feels like an ever shifting, living creature that constantly reconfigures itself as new information starts to bleed in from the sides. It almost takes shape, then shatters and the process begins anew. Like a great folk song, Inside Llewyn Davis is both intensely moving and utterly hilarious, albeit in a very bleak way, and it also makes you want to play it again and again and again. An utterly beguiling, maddening piece of work.