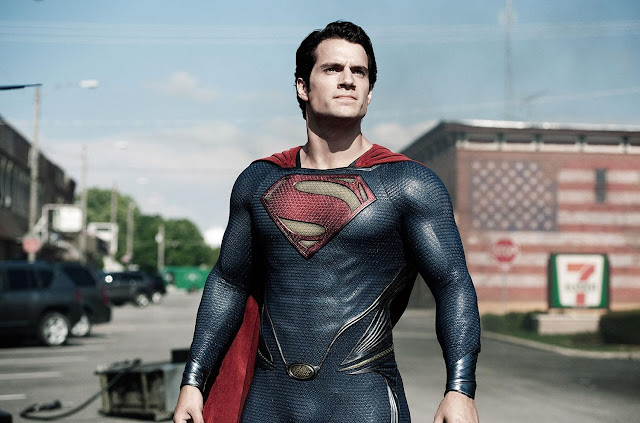 If there's one image that sums up Man of Steel, Zack Snyder's loud, long, and tedious retread of the Superman story, it's of the Hero Formerly Known As Kal-El (Henry Cavill) knocking down a skyscraper as he goes mano a super-mano with General Zod (Michael Shannon). It's a fleeting moment, but one that says a lot about the intentions and attitudes of the film, as well as those of the people who made it. Whereas most iterations of Superman have focused primarily on him saving people, often at the expense of his own well being, and doing as much as possible to limit the damage, Man of Steel's climax is all about how much damage is inflicted while trying to defeat Zod.

The briefness of that particular moment of destruction is the most telling thing about it; Man of Steel is a superhero film all about the amazing things that its central character can do, but the destruction of entire buildings and deaths of unseen thousands are treated as an unimportant byproduct of his actions, rather than something he should be going out of his way to prevent. But that's all at the end of the film, during a final fight that takes forty minutes to achieve something that it takes Superman all of five seconds to do at its end. There's an entire hour and a half of terrible movie to wade through before that fight even begins.

As with Richard Donner's 1978 version, Man of Steel begins on the dying world of Krypton, which is about to perish thanks to the way in which its inhabitants have depleted its resources. Scientist Jor-El (Russell Crowe), recognising this threat, is trying to convince the ruling council that they need to send the DNA of future Krytonians off-world so that they will have a future, even if it's not on Krypton. His pitch is rejected, then interrupted by Zod and his forces, who stage a (quickly subdued) military coup. In the confusion, Jor-El sends his son off-world, where he lands in Kansas and is reared by Ma and Pa Kent (Diane Lane and Kevin Costner), who raise him as their own and teach him important morals like never reveal who you are, and sometimes it's okay to let people die when you could easily save them.

Now, I'm not the biggest fan of Superman as a character - I just find it difficult to get that invested in a character who's basically invincible apart from one specific weakness, which tends to make for fairly limited storytelling because Kryptonite pretty much has to appear at some point. However, I do find his unwavering moral code pretty interesting, especially when contrasted with characters like Batman who live in a world of moral grey. (Though Snyder's Superman lives in a very literal world of greys, because he seems to have stolen his relentlessly drab and ugly colour palette from Gears of War.) Considering that most superhero movies now try for murky, faux-complexity, Man of Steel could have really stood out by being a film about someone trying to be unequivocally good, and who tries to represent the very best of (super) humanity.

Snyder, working from a script by David S. Goyer and an idea by Christopher Nolan, try to add some shading to the traditional image of Superman by having him fight his immanent goodness from a young age. His father tells him that he needs to hide who he is because people won't be able to handle the existence of someone like him. That's something that's been used in past tellings, most notably in Smallville, but generally, Clark is encouraged to help people if he has no other option, on account of it being the right thing to do. Here, Jonathan Kent (Costner) explicit tells Clark that his secret is more important than other peoples' lives, and that he should let people die if it would risk exposure (at the same time that he also tells him that he believes Clark is destined for something great).

Even if that wasn't a massive corruption of the Superman mythos, which it is, that's a kind of moral complexity that, frankly, the story can't sustain, especially since it shows such little regard for human life elsewhere in the story, it makes you wonder why Clark even bothers to become a hero at all. If Pa Kent thinks it's acceptable to let a bus full of school kids drown to prevent people finding out about his son, and Zack Snyder doesn't think that leveling huge parts of a city are something Clark would try to avoid, then what does it matter if he becomes Superman? That's a question the film never answers to any satisfactory degree, if it tries to at all. People seem destined to die whether he steps up or not, and if anything he makes the world a far, far worse place merely by being in it.

The childhood sections make for arguably the strongest part of the film, if only because Costner is pretty much the perfect choice to embody the humble Midwestern goodness of Jonathan Kent. (It's certainly better than the scenes on Krypton, which look like Snyder grafted the last reels of Avatar on and just drained all the colour from them.) Costner sells the hell out of the line "You are my son," when reassuring Clark that he loves him, and he does such a good job with that one line that it's almost possible to overlook how badly the film treats his character. Though it's only almost possible to ignore the way it turns him into someone who vomits out mixed messages to his son, then dies a "noble" death that lacks any resonance because it's treated with the exact same po-faced ponderousness that suffuses the rest of the film. The performances are pretty strong across the board, actually, and are more or less the only redeeming part of the film.

It would be easy to go on about why Man of Steel is a bad Superman movie, how it fundamentally misunderstands what is good about the character and how he relates to his adoptive home world, or how it never once lets its characters crack a smile or have a bit of fun, but that would be to ignore how terrible a film it is in general. As an action movie, it's dull and repetitive, with a final fight that has all the grace of two drunks punching each other outside a kebab shop. Underpinned by Hans Zimmer's leaden score, one whose somberness borders on self-parody at times, it's a bludgeoning sequence that seems intent on battering the audience into submission: Inducing enjoyment through Stockholm Syndrome. Its CGI is so weightless that the destruction is frankly Dadaesque in how meaningless it is, while its action sequences are little more than empty spectacle (crassly playing on 9/11 imagery like it's going out of style, which I dearly wish it was) with no stakes or wit to them, since Superman doesn't seem to give two shits about saving people when he could be punching villains through load-bearing walls.

One thing that Bryan Singer's much-maligned Superman Returns got completely right was that it built its finale around Superman limiting damage, rather than causing it. He flew around Metropolis, quite literally putting out fires and pushing himself to his very limits in order stop people from dying. In Man of Steel, he seems to be operating on the assumption that letting thousands die is fine, so long as it saves the world. That's a perfectly fine calculation to make if you're Batman or Henry Kissinger, but Superman is meant to aim for a higher standard, and so should the films that bear his (nick)name. This cynical, ugly, tedious, joyless slog of a movie simply doesn't measure up to the ideals of its character, or the basic criteria for an entertaining story.