50 Years of the Magnificent Mary Poppins 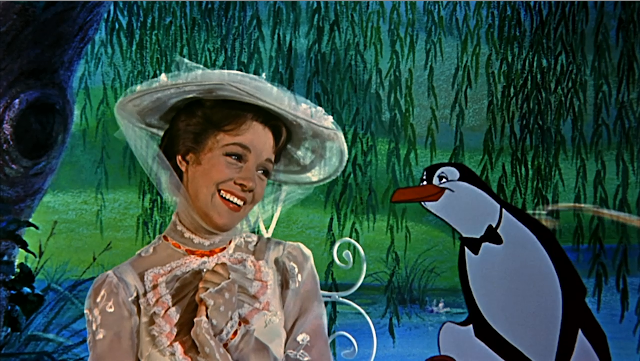 To mark the limited-release of Walt Disney's Saving Mr. Banks, guest contributor Spencer Blohm takes a look at the real-life story that inspired it: the battle between Walt Disney and P.L. Travers, the creator of Mary Poppins, over how to bring the character to life.

This month marks two milestones for the Disney Company: the release of the 50th Anniversary Edition of Mary Poppins and the premiere of the new film Saving Mr. Banks, which documents the former film’s creation. Based on the emerging reviews, it looks like Saving Mr. Banks is on its way to becoming yet another legendary Disney live-action film alongside its predecessor. The original Mary Poppins was responsible for skyrocketing Julie Andrews to fame, but viewers may be surprised that, as evidenced in Saving Mr. Banks, it was initially a long and difficult journey to get Mary Poppins off the ground and into theaters.

The Mary Poppins novel by P.L. Travers was published in 1934 and became an international success for the Australian-born writer.  Following the success of the book, Roy Disney (Walt’s brother) approached her in 1938 about turning the book into a movie - an offer which she rejected. She would continue to reject all offers made by Walt Disney over the next 20 years, before finally relenting due to lagging book sales. As a result, in 1961 Disney purchased the rights to Mary Poppins. However, it’s likely that not even Walt could have prepared for the three years of creative clashes that would take place behind the scenes.

The initial contract signed by Travers awarded her a $100,000 advance, 5% of the film’s profits, and script approval. From the moment the ink dried on her contract, it became clear she took her script approval rights seriously. The primary change was to take the dark and bleak story of a Depression-era London family and their stern nanny and turn it into something cheerful, complete with that signature Disney charm. Unsurprisingly, Travers wasn’t thrilled with this idea. The Banks had suddenly become wealthy Edwardian-era Londoners and the nanny (who in the book was described as “angry” and “frightening”) became a charismatic, singing and flying angel, complete with animated animal friends.

The singing, along with the cutesy animations, was the biggest source of contention for Travers. Disney invited her to visit his Burbank studio, in the hopes of distracting her from exercising her script approval with the glamour of Hollywood, but still she made it clear she wasn’t budging. She bombarded the Sherman brothers, who composed the film's songs, with criticism and attempted to steamroll Disney’s team of writers into rewriting the entire script. Following her departure from the Disney studios, Travers and Disney continued to argue back and forth for nearly two years over almost every facet of the film from the music to the casting. She disapproved of Dick van Dyke as Bert, but Julie Andrews had managed to win her over with a phone call shortly after she was cast.

By the time the film was finished, the bickering between Travers and Disney had become so intense that she wasn’t even invited to the premiere, and was forced to request special permission to attend. As the audience rose for a standing ovation at the film’s end, Travers remained seated, crying, a mix of sadness and anger at what she felt was the butchering of her book. At the afterparty she and Disney had their final confrontation; Travers demanded the removal of all animated scenes, to which Disney replied “the ship has already sailed.”

Despite the film's massive financial success, rave reviews, and critical praise, Travers remained bitter about the changes for the remainder of her life. Whenever given the opportunity, she criticized Disney for glossing over her original story in favor of a simple, cheery plotline. She refused to work with Walt Disney, the Sherman brothers, or any other American ever again. However, she did sell the rights to Mary Poppins one last time to Broadway producer Cameron Mackintosh in 1994, who wanted to create the musical. After her death in 1996, her last will and testament she gave strict guidelines to Mackintosh for the musical - that no Americans were to touch it.

About the Author: Spencer Blohm is a freelance film, entertainment, music, and pop culture blogger for DirectStarTV.com. A lifelong Disney fan, he spent his childhood longing for a cheery British nanny like Mary instead of his apathetic teenaged cousin who babysat him as a toddler. He lives and works in Chicago where he can often be found trying to fly to work using his umbrella and the Chicago winds. He is currently unsuccessful in this feat.
By Edwin Davies
Labels: 2013, film, Julie Andrews, Mary Poppins, Saving Mr. Banks, Walt Disney
Newer Post Older Post Home