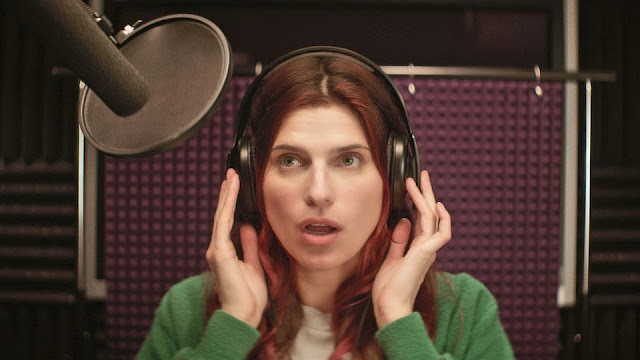 It's strange to think that no one has ever made a comedy set in the world of voice-over artists. In some ways, it's kind of a perfect setting for one. It's a very specific, small community with its own outsized personalities; people like the late Don LaFontaine, who coined the phrase "In a world..." which is synonymous with a certain kind of epic movie trailer, and who was a very successful, acclaimed figure within the voice-over community but whose fame never extended far beyond it. After all, the whole point of being a voice-over artist is to be seen and not heard. Given that milieu, you could easily see someone Christopher Guest having a field day showing the members of this insular world competing against each other, complete with stakes that would mean almost nothing to the average person, but everything to the artists themselves.

Lake Bell, the writer, director and star of In A World... does precisely that, though she has broader and more subversive aims than to merely offer a window into a small yet highly competitive world. Bell plays Carol, a dialect coach who wants to do voice-overs for trailers and commercials but never seems to get the opportunity to do so. Her lack of success is exacerbated by the fact that she is the daughter of Sam Soto (a wonderfully oily Fred Melamed), a legend in the voice-over world who is preparing to receive a lifetime achievement award when he kicks Carol out of the house so that he can move in with his much younger girlfriend, forcing Carol to move in with her sister Dani (Michaela Watkins) and brother-in-law Moe (Rob Corddry).

Things suddenly turn around for Carol when Gustav Werner (Ken Marino), Sam's protege and heir apparent, develops laryngitis and Carol records a temp track for a project, at the behest of her engineer friend Louis (Demetri Martin). The recording gets the attention of the producers of the adaptation of a YA series called The Amazon Games, who are looking to revive LaFontaine's long dormant catchphrase for their trailer and ask Carol to submit an audition tape. This leads to her landing other jobs as different companies take notice of her work, but it also puts her in direct competition with her father and Gustav, setting the stage for a battle of truly epic enunciation.

One of the things that's great about In A World... is that it's a comedy which manages to work as several different kinds of comedy. At its most basic level, it's a screwball tale about an area of the entertainment industry which is rarely depicted or commented upon, but which is every bit as cutthroat as its more storied counterparts. Bell gets a lot of mileage out of merely depicting the basic parts of the job, such as the variety of vocal exercises that Carol, Sam and Gustav carry out to prepare their voices for their work, which look incredibly bizarre to outsiders. She also has a lot of fun playing with the disparity between how grandiose Gustav and Sam act, strutting around as if they were Tom Cruise and Jack Nicholson, despite how relatively minor their role in the movie business actually is. They're incredibly big fish in a minuscule pond, and there is something fascinating and hilarious about seeing those kind of personalities clashing.

As well as working as a slightly skewed examination of a particular area of Hollywood, albeit one which exists on the fringes, Bell uses her story as a means of exploring sexism and gender bias in the entertainment industry as a whole. Carol's plight and success are both framed by the fact that she is a woman in a male-dominated industry, and the openly hostile way in which Gustav and Sam respond to her are very telling about the attitudes within the industry as whole, as well as illustrative of the fragility of the alpha male ego. There's also a very interesting thread in the film examining the point at which feminism and commercialism collide, making In A World... very much an equal opportunities offender when it comes to picking its targets. The satire throughout is subservient to the story and the jokes, which range from broad to very specific, inside baseball stuff (or, in the case of a running joke about how much Carol hates women who talk like sexy babies, things that might just irritate Lake Bell), but it still has real bite to it, and ultimately gives the film an emotional and comedic resonance that belies its otherwise frothy tone.

On top of that, the film has some great character-driven comedy that has little to do with the main narrative or thematic thrust of the story, but further enriches its comedic world, one which is fleshed out by some of the funniest actors currently working today. In particular, the familial relationships are wonderfully handled: whether it's depicting the relationship between Carol and Dani as adult siblings who enable each others' best and worst tendencies, Carol and Sam as two people who make their livings with their voices but can't communicate, or between Moe and Dani as a married couple who care for each other but are still open to the temptations around them, In A World... manages to make each of them entertaining and authentic. There's even time for a sweet, funny romantic subplot between Carol and Louis that dovetails nicely with the main Amazon Games plot line (at which point it manages to become a sports film - complete with training montage! - on top of everything else).

This could all have made for an overstuffed mess, but Bell pulls it off beautifully thanks in part to her smart, layered script, and great cast, but also because she provides such a solid focal point. Anyone familiar with her work on Adult Swim's gleefully insane series Childrens Hospital will know that Bell is incredibly funny when it comes to doing broad, wacky material, but here she gets to shine as a lead in the Diane Keaton or Lucille Ball mold; as someone who can do big and small moments equally well, who never lets vanity get in the way of a good punchline, but never lets a good punchline get in the way of an honest emotion. It's a remarkably strong performance in an immensely confident and assured debut, one that hopefully suggests great things in the future for Lake Bell, a filmmaker who clearly has had no problem finding her voice.