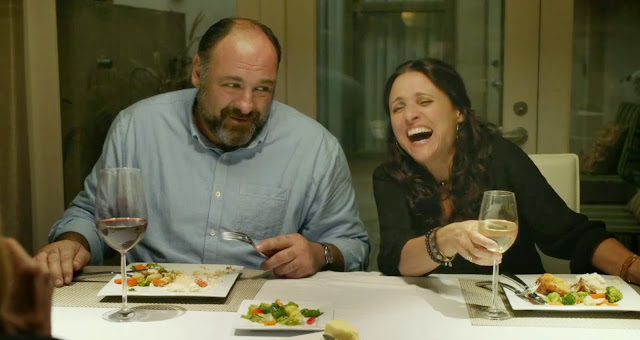 Whether or not you like Enough Said, the latest film from Nicole Holofcener (Walking and Talking, Please Give) will probably boil down to what you want from a comedy. Specifically, whether you value structure and plotting over character and performance, or vice versa. The film positively overflows with the latter, with Julia Louis-Dreyfus and James Gandolfini giving warm, funny and natural performances as a pair of divorcees who embark on a playful romance together, but those very graceful and unforced performances are in service of a plot which at times feels very awkward and contrived. In order to discuss the film in any depth, it's necessary to give away the set-up, which is admittedly established fairly early on, but if you're really spoiler-adverse consider that fair warning.

The most problematic aspect of the plot is that Eva (Dreyfus) discovers that her new friend and massage client Marianne (Catherine Keener) is the ex-wife of Albert (Gandolfini), the man that she has just begun seeing. It's a perfectly innocent happenstance - she meets them both (separately) at the same party and becomes friendly with them (separately) afterwards - that she doesn't clear up immediately because it would be immensely awkward and could irreparably damage her friendship and business relationship with Marianne. Eva soon realises that she can use Marianne as a means of learning about Albert and can gain an insight into what went wrong in their marriage, hopefully allowing her to figure out if the same problems could occur in their relationship. So a benign misunderstanding shifts into a slightly more calculated and orchestrated deception which, because this is a romantic comedy, must eventually come undone.

There's nothing terribly wrong with that set-up or structure, apart from it being fairly predictable, but Holofcener's script works so hard to put the machinations of the plot into motion that it feels incredibly laboured. It's obvious from a very early stage that Albert and Marianne were once married because they constantly talk about their exes without actually saying their names, which is a pretty big clue that something is being held back. As such, even though the reveal takes place about half an hour into the film, it feels as if it is taking far too long to say something that everyone has figured out, making what should be a moment of surprise into something more mechanical and creaky. That's assuming that it's meant to be a surprise - the trailer certainly doesn't make any effort to hide what the film is about - but if people are meant to know the plot going in then it only makes that sluggishness more infuriating.

It's especially frustrating when you compare the at times clunky unfolding of the plot to the vibrant, funny and guileless performances that bring the film to life. Considering that she's been one of the most consistently hilarious women on television for over twenty years, it's hard to believe that Julia Louis-Dreyfus is only just now getting to headline a film, but she does so brilliantly. She makes Eva feel very real; she's a woman who has had a few setbacks, whose life hasn't quite turned out how she might have hoped, but who still enjoys herself, even as she has to give massages to people she can't stand and is in slowly coming to terms with the fact that her daughter (Tracey Fairaway) is about to leave for college. It's a very nuanced role that perfectly suits Dreyfus' sensibilities as a performer, allowing her to be sweet, acerbic and wry.

James Gandolfini's tragic, untimely death casts his performance in a more melancholy light than it might otherwise have had, but it's a great tribute to him as an actor that he makes you forget what a loss he was until after the credits roll. Running pretty far away from his signature role of Tony Soprano, as well as the various toughs and heavies he's played over the years, he brings a deft and light touch that, much like Dreyfus, suggests a great depth of life experience without getting bogged down by it. Albert's clearly a man who has lived a full life and who is able to laugh at his mistakes, even if he might not have learned from them. The relationship between the two feels very grounded and authentic since both feel like real, slightly bruised people who are still able to laugh and love despite, or even because, of everything that has led them to this point in their lives.

The performances are so wonderfully judged, with Dreyfus and Gandolfini bouncing off each other with the sort of easy charm that makes it seem like they've been working together for years, that the film manages to overcome the instances where it fumbles the plotting. As an examination of a late-blooming relationship and of the changing nature of romance, it's wonderful, even though as an exercise in storytelling it's often clumsy. Enough Said is a wildly imperfect film, but it also features two near-perfect performances, and I ultimately liked spending time with the characters so much that it didn't really matter what they were doing.