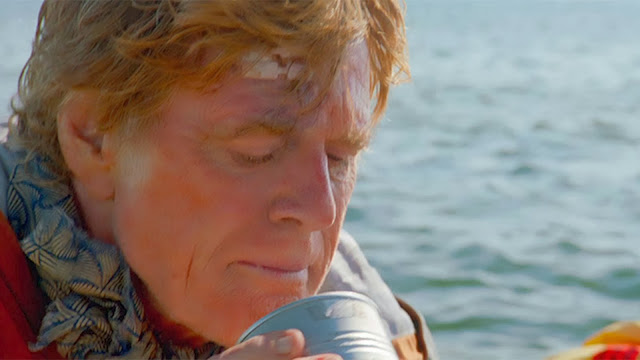 Few films can lay claim to a better use of the word "fuck" than the one which occurs roughly halfway through J.C. Chandor's (Margin Call) All Is Lost. This is at least in part because it's the only time that the word is used, which gives it a certain power at a moment of emotional release, but also because it's one of the only words uttered at all. Apart from a brief (though comparatively verbose) bit of narration at the beginning, the film is largely dialogue-free, so based on a ratio of swear words to non-swear words used, it may be one of the most profane films ever made.

More importantly, the context in which the unnamed character (Robert Redford) finally vents his frustration makes it feel like the most thoroughly deserved use of profanity ever. As a man whose boat strikes a shipping container in the middle of the Indian Ocean, creating a great gaping hole in its side which lets in water and ruins his navigational equipment, he is put through the ringer. With no means of contacting the outside world, he's forced to survive through his wits and ingenuity, making what repairs he can and hoping that he can make it to shipping lanes without anything else going wrong. Needless to say, a leak is merely the first of many bad things to befall Redford, and you really feel like he earns that "fuck."

As a piece of 'survival' cinema, stories of individuals forced into a seemingly impossible situation who have to claw there way out, All Is Lost is one of the purest, least fussy examples. Unlike recent entries like Danny Boyle's 127 Hours or Alfonso Cuarón's Gravity, Chandor's film eschews any attempts to establish the character outside of his current disaster. There are no scenes of Redford's life on land to give us a sense of who he is, nor are there any opportunities for him to describe his back story to a second party. The film begins with him waking up to discover that his cabin is filling with water and he is the only person who appears on screen throughout. It is a truly minimalist story, one that consists only of a man, his boat and the endless, empty blue.

The dearth of information adds an undercurrent of mystery to the main story of whether or not Redford will make it, as every action and detail becomes a potential clue to who he actually is. And it is possible to glean a few things about him from the fact that he owns his own boat, is a proficient sailor and appears to have a ring on his finger. These all say a lot about who he might be in the real world, but they are quickly forgotten as the seriousness of Redford's situation becomes apparent. What matters most is not who he is, but what he does when faced with adversity. Chandor and Redford say a great deal about the character through showing his grim determination and will to survive no matter how many things go wrong for him, without ever having him actually articulate those ideas.

There's a nice balance throughout between scenes of tedious process, such as the sequence in which Redford slowly, methodically repairs the hole in his boat, and ones of tension and disaster, such as a wonderfully staged sequence in which the boat is capsized by a storm while Redford is in the cabin, briefly turning the film into a more intimate, shorter Poseidon Adventure. The film understands that 'survival' can mean both trying to stay on your feet in the middle of a raging storm and waiting hours hoping to catch a fish, and that both crashing waves and starvation are equally deadly. All of this is nicely underlined by Alex Ebert's subtle, menacing score which, with its use of eerie, repeated motifs recalls William Basinski's haunting "The Desolation Loops," and creates a constant sense of dread during even the calmest moments.

While the physical nature of the film is important in getting across the threat, with a heavy emphasis on scenes of Redford sitting under the hot sun, trying to keep busy while hoping for help to come even as the sea stretches out with not a soul in sight, it's his performance that makes the film so powerful. Water crashing against the boat is only as effective as Redford's reaction to it, and he does a brilliant job of selling the peril. It's a largely stoic performance, an effect bolstered by the lack of dialogue to weaken the mystique, but he lets the cracks show just enough to indicate his growing fear and desperation, even as those emotions are always subsumed beneath his all-consuming will to live. All Is Lost is a thrilling film, not necessarily because of what happens, but because of who it happens to.

Refreshingly, Redford is not afraid to be old onscreen, and unlike his contemporaries like DeNiro, Pacino and Stallone, who seem determined to take roles in which they upstage men half their age, he shows that the events take a toll on him. His efforts might be extraordinary, but he himself is not a superhuman. He's an all too frail man pitted against the bleak, unrelenting elements, and there is a bracing lack of ego in his performance (though there is a certain cyclical logic to the idea that giving an ego-less performance will get him the sort of rave reviews which will no doubt stroke his ego). But he does deserve any plaudits he receives, because he gives a bold performance lacking any of the complacency that he has shown in recent years (and which, arguably, he has earned, considering his contribution to cinema) in a film which is startlingly uncompromising.