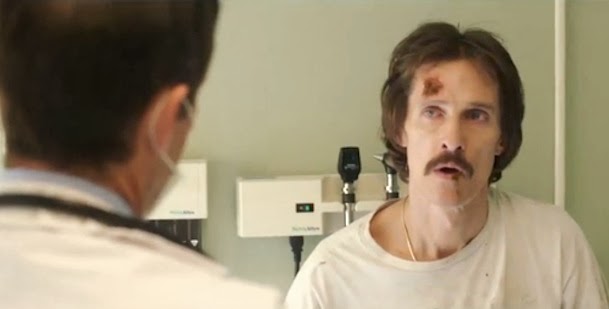 Given its constituent parts - based on a true story that centres around a main character struggling with AIDS and featuring an actor who loses a huge amount of weight for the role - it's all too easy to imagine a version of Dallas Buyers Club which is prime awards fodder. In the wrong hands, it could have been maudlin, self-important and capital-I Important. Not merely a film about a Serious subject, but one intensely aware of its own Seriousness, and determined to remind the audience just how very Serious it all is. Everything would seem to be in place to create the epitome of middlebrow Oscar bait.

Fortunately, the story of Ron Woodruff (Matthew McConaughey), a hard-living, homophobic electrician and bull-rider who smuggles medicine from Mexico to treat his AIDS, then winds up becoming a hero to the gay community, fell into the hands of Jean-Marc Vallée (C.R.A.Z.Y.), a director who brings a light touch to proceedings. He wastes no time in establishing Woodruff's condition, having him learn that he has only 30 days to live within the first fifteen minutes of the film. He then moves swiftly to show Woodruff's deterioration, how this is exacerbated by the drug AZT, which he takes as part of a trial overseen by Dr. Eve Saks (Jennifer Garner), before finally placing him in Mexico, where he realises that there is serious money to be made from smuggling in more effective medication which has not been approved by the FDA.

Although Vallée never lets us forget that Woodruff is very sick - a fact that is hard to ignore given McConaughey's near-skeletal physique - he pitches it as a something of a caper; an extraordinary get rich quick scheme which just so happens to save hundreds of lives. And as Woodruff's illness slowly recedes into the background as his treatment takes effect, it shifts from being a story about him trying to get what he needs to survive to one about him staying one step ahead of the authorities (represented by Michael O'Neill, who has played so many federal agents at this point he's probably an honorary Deputy or something) as he sidesteps the law to get the paid members of the "Dallas Buyers Club" the medicine that they need.

A key part of the film's tone, which nimbly shifts from flighty caper to moments of raw emotion, is the central dynamic between McConaughey as Woodruff and Jared Leto as Rayon, a transgender woman who he meets in hospital, and who quickly becomes central to his efforts to reach out to the gay community. While initially icy - Woodruff is shown to be a rampant homophobe, though seemingly no more or less so than everyone else he associates with in mid-'80s Texas - their relationship grows into one of camaraderie, though one always tinged with mild antagonism from both sides. McConaughey continues his superb run of form, making Woodruff captivating and charismatic, even if he's often not sympathetic. His laid back charm perfectly suits the entertaining rhythms of the film, though when the moment calls for him to be righteously angry or deadly afraid, he's able to switch up with ease.

The true revelation, for me, is Jared Leto, an actor who I've never been particularly interested in, even when he's in films that I like (though this is in no small part due to him being the lead singer of 30 Seconds to Mars, a band who are somehow worse than their name suggests). He's always struck me as a performer who treats acting like weightlifting; he needs to show everyone that what he is doing requires a very great deal of effort. That kind of self-seriousness is immensely grating, and what's wonderful about his performance here is how effortless it looks. He lightens up - both tonally and physically - and gives the performance of his career; playful, witty and soulful, it's a brilliant piece of work that never feels forced, and manages to be exuberant without being over the top.

While Dallas Buyers Club is a hugely entertaining film, it's not without its flaws. Its loose, shaggy energy sets it apart from its fellow awards contenders, but it also leaves it feeling episodic and aimless - a feeling that is only heightened by the structure of the film, which jumps forward months and years at a time, creating a disjointed rhythm. Fortunately, the strength of its performances more than make up for its less than stringent structure, and what it lacks in narrative thrust it more than makes up for in pacing and atmosphere. It's a fleet-footed film that doesn't quite deliver the emotional punch it could have - or probably should have, considering the undercurrent of anger that bubbles up in the final act of the film as it takes aim at the organisations who let thousands die of AIDS rather than approve effective treatment - but it still gets plenty of strong jabs in.