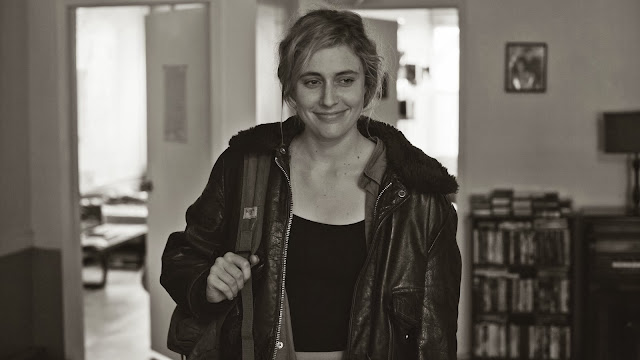 Frances (Greta Gerwig) is a 27 year old woman living in New York who works as an apprentice at a dance studio and spends her days hanging out with her best friend Sophie (Mickey Sumner). The two have been inseparable since college, but when Sophie announces that she is going to move out, Frances finds herself drifting from apartment to apartment, and even city to city, as she contemplates her life as a  self-described "undateable" woman with few career prospects.

While I'm loathe to use the term 'mumblecore,' which I think functions less as a name for a movement than as a derogatory term some critics use to dismiss low-budget films, the presence of Greta Gerwig, who has long been the poster girl for the 'movement' and the loose, verbose nature of Frances Ha's story makes the association somewhat inevitable. Like a lot of the films that fall under the mumblecore umbrella, Frances Ha is low on incident, high on discussion, with a story that consists of vignettes centred around each of the apartments that Frances lives in after Sophie moves out, and the events and encounters that emerge as a result. It's very much a character piece focused on one young woman slowly edging towards a crisis, someone who vaguely knows what she wants from life, doesn't really know how to get it, but is happy to muddle along until she figures it out, trading witty quips with her friends and having fun.

What sets the film apart from the mumblecore crowd is its style; where most films in that vein tend to be shot in scrappy, tossed off fashion that strives for realism, Frances Ha is self-consciously gorgeous. Director Noah Baumbach, in his second collaboration with Gerwig, with whom he co-wrote the screenplay, shoots the film in gorgeous black and white and strives for beauty. Even though there is a tremendous energy to the film, with each scene thrumming with giddy excitement and potential, each shot feels very deliberately calibrated to capture the essence of Frances and the city in which she lives. There's a clear nouvelle vague influence in both the visuals and the rhythms employed to tell the story, one that prioritises movement and prevents the film from becoming overly solipsistic or introverted. Those qualities are baked in to the core of the film - it is a story about someone going through a quarter-life crisis, after all - but at least when Frances turns inwards and talks about herself and what she wants from life, Frances Ha remains focused on showing the beauty of the world around her.

As Frances, Gerwig is a quintessential wanderer. She's funny and witty when with her friends, but believably awkward whenever she is placed in a situation where she is out of her element, such as in a great scene where she attends a dinner party and turns small talk into a chance for confession. She is by turns detached and raw, subtly showing that her humour acts as a defense mechanism without being obvious about it. There's a wonderful selection of supporting actors for her to play off, including the great Adam Driver as a charismatic but very entitled artist, but it really is a film all about Frances, and Gerwig makes for a captivating, quietly complex focal point.

What's particularly interesting about Baumbach's film is that it's intensely romantic, even though there is no real love interest for Frances to pursue or be pursued by. The closest it has is her relationship with Sophie, which grows distant and strained once they no longer share an apartment, but apart from that it's mainly focused on her process of self discovery. It's infatuated with the idea of being young and following your dreams, even if they end up leaving you virtually homeless, jumping from couch to spare room to Parisian apartment. It's desperately in love with New York, and the freedom of running through its streets to David Bowie's "Modern Love." It's an expression of vibrant exuberance and enthusiasm, one that lacks filters and embraces everything that comes its way.

It's also nostalgic, not for a distant past, but for the present, and the ever shrinking window of time in which it is possible to defer adulthood in the hope that you'll make it and never have to really grow up. What gives the film poignancy beneath the comedy is the tension between Frances' aimlessness, her inability to imagine a life plan that doesn't involve dancing, with the very pressing reality that she might not be good enough to make her passion into a career. Or, even if she is good enough, that she still won't be able to make it work, because how many decent jobs are there for dancers? Though its unrestrained qualities are intoxicating, Frances Ha is ultimately a much wiser and mature film than its central character: it acknowledges that adjusting to the practicalities of reality is not the same thing as giving up your dream, it just means you have to pursue it in a different way.

Warm, funny and brimming with joie de vivre, Frances Ha is a glorious celebration of the aimlessness of youth which never falls into the trap of pure whimsy, and which captures the terror of that same aimlessness without succumbing to navel-gazing. It's a delicate dance of a film, and a true wonder to behold.