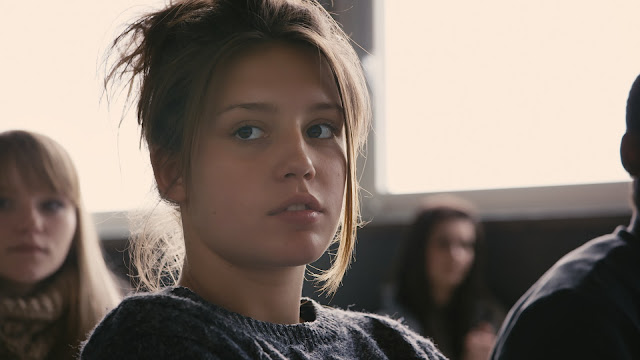 Inspired by Julie Maroh's graphic novel of the same name, Blue Is the Warmest Colour is the story of Adèle (Adèle Exarchopoulos), a seventeen year old girl going through those slightly lost days before adulthood truly begins. She loves to read, talks about boys with her friends, attends anti-austerity rallies, and has only a very vague sense of what she wants to do with her life. Whilst walking through town one day, she sees Emma (Léa Seydoux) and falls for her, hard. After meeting properly at a gay bar, Adèle and Emma meet up, have long conversations about literature, love and life, and become lovers. Over several years, their relationship flourishes, even as they are drawn in different directions, as Adèle becomes a teacher and Emma pursues a career as a graphic designer. As the relationship shapes and defines Adèle's personality, and as that relationship begins to fray, Adèle starts to unravel in tandem.

Much has been made about the numerous explicit sex scenes that punctuate the film - to the extent that "blue is the warmest color sex" is its third Google result  - and specifically the 20 minute sequence that marks the first time Adèle and Emma sleep together. These scenes are at times indulgent, gratuitous and a little monotonous (and, yes, sexy) but to focus on the sex, rather than what the sex represents, is to miss the wood for the trees. Their purpose in the drama is a metaphorical one, rather than to be purely titillating. (Though to deny that is at least part of the reason why they are included, given the aesthetic choices on the part of director Abdellatif Kechiche, would be disingenuous in the extreme.)

They serve to illustrate the different stages of the central relationship, from the unabashed, unreserved passion and lust of its early days, charged as they are by Adèle's self-discovery, through the comfy middle period of sharing a house and building a life together, up until its slow, sad dissolution. Each scene has a different mood and aim, with the sex being by turns acrobatic, tender or desperate, depending on where the characters are at that point. They serve much the same purpose that musical numbers did in Singin' In The Rain, or the fight scenes in Scott Pilgrim vs. The World (another great comic-book adaptation about someone's life being thrown into turmoil by a girl with blue hair): they are carefully orchestrated expressions of emotion. Blue Is the Warmest Colour's depictions of sex may occasionally be inauthentic, but the emotions they represent are anything but.


And the reason why those emotions feel utterly, painfully real lies in the performances by Seydoux and Exarchopoulos. The former does a wonderful job of playing someone who is the older, more experienced half of the duo without ever coming across as smug or knowing. There's genuine affection between Adèle and Emma that runs deeper than physical attraction - though the chemistry between the two actresses ensures that the film doesn't lack for frission - and without that, the film's sadder, melancholic second half wouldn't be anywhere near as effective or affecting. The pain of watching two people drift apart like tectonic plates is all the more keenly felt when we sympathise for both halves. It would have been easy to make Emma - who, despite being crucial to the story, is a secondary player - the villain, or at least so neglectful that the end of the relationship wouldn't seem like any utterly devastating outcome, which it completely is by the time it starts to falter.

But it's Adèle Exarchopoulos who is the focus of the film, the one who remains onscreen for almost every frame of its near three hour duration, and she gives a magnetic, fearless and gripping performance that gives Blue Is the Warmest Colour its power to both move and amuse. Because while the film is an emotionally draining, at times devastating experience, it's also a really beguiling and entertaining film; it warms your heart right before tearing it out. Exarchopoulos perfectly encapsulates the hugeness of being a teenager, the sense that every emotion, good or ill, is felt more keenly and more fully than it ever has or ever will be. When Adèle laughs and messes around with her friends, it's the fullest laugh imaginable; when she cries, it represents the deepest sorrow; when she loves, it's the very crux of passion. Yet Exarchopoulos doesn't give a big or showy performance; she gives one that is deeply felt, suggesting the fullness of Adèle's inner life without veering into histrionics. For a film that flirts with indulgence, hers is an admirably restrained turn.

She also conveys the many subtle ways in which Adèle changes over the years, going from a shyly intelligent teenager to a confident woman, without seeming to change drastically from scene to scene. Yet taken as a whole, the culmination of each tiny alteration means that she is almost unrecognisable by the end. It's a remarkable transformation which makes it truly seem as if we have spent years watching the evolution of the character (though, again, that could just be the running time). The rigour that Kechiche displays in his pacing and tone means it feels like one smooth, flowing narrative, rather than a more episodic one, and that commitment to growth, change and adaptation is all part of what makes Blue Is the Warmest Colour such a captivating, engrossing experience.

The French title is La Vie d'Adèle – Chapitres 1 & 2, and I think that title better encapsulates what is so wonderful about it than the more evocative (and Nilsson-reminiscent) English version. It's a window into part of a young woman's life, the first parts of her sexual and personal awakening, but it's still only a beginning. There's something sadly hopeful about the film, particularly its ending, which suggests that whatever pain the characters endure, it's something that will pass, or at the very least fade away, then shape them as they move on. It's a stunning, profoundly moving examination of young love, human sexuality and what happens when that initial spark starts to flicker, but one which shows the joy and exhilaration of the good times, even as they sour into the bad ones. A remarkable achievement.