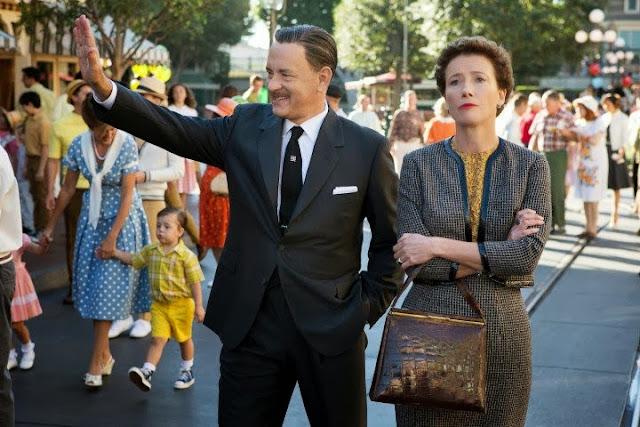 For over twenty years, P.L. Travers (Emma Thompson) denied Walt Disney (Tom Hanks) the rights to her most famous character, Mary Poppins, despite the huge monetary reward she would receive for allowing him to adapt her work into a film. Early on in Saving Mr. Banks, the story of how Disney finally managed to convince Travers to let him make that movie, Travers explains to her agent, for what must be the thousandth time, the reason why she has persisted in her refusal for so long. (Or, at the very least, she provides a reason why she has resisted.) She's afraid that if she signs the rights to Disney, and if he in turn makes a film out of her books, that he will turn Mary Poppins into a cartoon, a creature that is all sparkle and whimsy, with all the rough edges sanded off and darkness removed. While watching John Lee Hancock's film, it's easy to imagine the real Travers tutting ruefully as the corporation that bears Disney's name does to her own life what she feared Walt himself would do to Mary Poppins.


Actually, that's not entirely fair; Saving Mr. Banks doesn't skimp on many of the difficulties Travers faced growing up in Australia, many of which went on to inform and shape her work as a writer. The film cuts back between her dealings with Disney and his creative team in 1961 and her childhood, in which we see her relationship with her romantic dreamer of a father (Colin Farrell), whose boundless imagination and love of creativity went hand in hand with his alcoholism. These sections lean a little too hard on knowing references to Mary Poppins, seemingly cramming in every possible incidental line - from "spit spot" to Mr. Banks' entire speech about the benefits of banking - drawing parallels between Travers' childhood and her later work that feel a touch too neat. Despite that, there's a bite and a harshness to them that, with the exception of Farrell's daffy free spirit routine, has the ring of truth. There's a real sense of discord between his desire to make everything fun and make believe and the crushing reality of his addiction and the effect it has on his wife (Ruth Wilson) and children.

Nor does the film soften Travers herself, who Thompson plays as a brittle, harsh and unforgiving woman who doesn't seem to care what anyone else thinks and is generally resistance to all forms of human interaction. She's the sort of person who, when flying to Los Angeles, having relented to meet with Disney and discuss the film as a way of resolving her money problems, asks a passenger with a baby if the baby will be "a nuisance." Saving Mr. Banks is, if nothing else, a joy for fans of Emma Thompson being snippy and impossible prim, insulting people in a deliciously posh way.

Most of the funniest, and some of the sweetest, moments come from Travers interacting with the rest of the Disney team, which includes the Sherman Brothers (Jason Schwartzman and B.J. Novak), the legendary songwriters who penned Mary Poppins' iconic songs, and its screenwriter, Don DaGradi (Bradley Whitford, doing some of his finest "looking harried while slumped in a chair" work since The West Wing ended). Watching these people, who are eager to please and work very hard to try to impress Travers, get repeatedly rebuffed and belittled, all while trying to remain upbeat and cheery, is a lot of fun, and it adds a nice spark to the scenes of them coming up with iconic moments for the first time. It's one thing to see the Shermans come up with the melody for "A Spoonful of Sugar," but it's quite something else for the song to be immediately shot down as too whimsical and upbeat by an angry Travers.

There's also an unexpectedly sweet and poignant subplot between Travers and her chauffeur Ralph (Paul Giamatti) that makes for one of the film's most touching, heartbreaking scenes. As with everyone else in the film, Travers is initially frosty and dismissive of Ralph, who repeatedly refers to her as "Mrs" instead of the more formal "Mrs. Travers," but she gradually warms to him, and seeing them share a small moment is one of the quiet highlights of a story which is otherwise focused on very big emotional breakthroughs. Giamatti isn't in the film very much, and his part isn't hugely important to the broader arc, but he provides a great deal of colour and is living proof that there really are no small parts.

Where the film lacks any rough edges is in its depiction of Walt Disney, which is perhaps not surprising given which huge corporation made it. Disney is first shown on a TV in Travers' hotel room, interacting with Tinkerbell as she makes him fly using pixie dust. In some ways, that's about as real as the character gets because, no matter how good Tom Hanks is, and he is very good, there's never a sense that he is a real person, but rather a persona who has walked off that television screen. There are little moments here and there where the film touches on his tough childhood growing up in Missouri, or establishes that he feels sympathy for Travers because he fought to keep control of Mickey Mouse when he had no money, that hint at the idea of him being a real person.

But no matter what the film does, it can't make Walt Disney feel real because it can't make him look bad, even for a second. It can't depict him as a shrewd, even ruthless businessman or a harsh taskmaster; it can't show him getting angry over Travers' intractable refusals and impossible demands. It can only show him as an affable guy (played by Mr. Affability himself) just trying to make a movie so that he can keep a promise he made to his daughters. It even goes so far as to ignore the fact that Travers ultimately didn't like the film version of Mary Poppins, instead ending right before she would be asked to offer her opinion on the final product.

However, the blankness of the Disney character doesn't prevent the film from being an engaging, and frequently moving examination of why people create art. The intercutting between Travers' childhood and present day at times seems a touch arbitrary, often repeating a point about her relationship with her father without adding anything new, but it ultimately pays off as an illustration of how artists try to fix their past traumas through their work. Just as Travers points out to Disney that Mary Poppins arrives at 17 Cherry Tree Lane to save Mr. Banks, not Jane and Michael, Travers' work acts as her own way of trying to save her father, even if it's just by keeping his spirit alive through her words. It's a powerful and moving idea that cuts through the occasional dips into rote sentimentality, and gives real weight to the cathartic final scene of the film. It also helps that the film has the great songs of Mary Poppins to fall back on, which are just as infectious, funny and moving as they were in 1964, and are given greater meaning in the context of Travers' and Disney's tussle over the soul of the character.

The conflict between Disney and Travers also works as a story about the tension that exists when one artist tries to adapt the work of another, especially when one of the artists has leverage over the other, as Travers does. It illustrates this in ways both big and small, ranging from Travers conversation with her agent to her palpable distrust of Disneyland and its fake streets, people and trees. At the heart of the story are two uncompromising artists who have very different views on the world and how Mary Poppins fits into it, and it's a fascinating dynamic that Hanks and Thompson do very interesting things with, even within the constraints of the Disney corporation.

It would have been hopelessly naive to think that Walt Disney, the company, would produce a film which was critical of Walt Disney, the man, so it's unfair to slate Saving Mr. Banks for not being something it never could be in the first place. Ultimately, it's a sweet, funny film about the creative process with incredibly winning performances, a zippy, lively pace, and some of the best songs ever written, used to wonderful effect. It's a big warm hug of a movie, albeit one given by the rich uncle you've always had suspicions about.