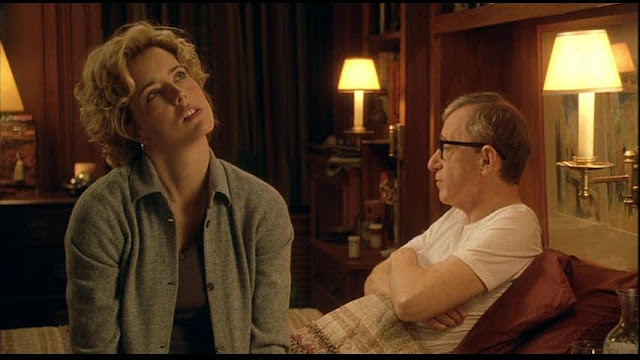 In Hollywood Ending, Woody Allen plays Val Waxman, a director who develops psychosomatic blindness. He does so as a result of the stress of working on a film which could be his big comeback or completely destroy his career. With the help of his agent (Mark Rydell), he tries to maintain the illusion that he can see, and sets about making the film despite at no point being able to tell what is going on or whether the dailies actually look any good. However, the reaction of his producer/ex-wife Ellie (Téa Leoni) and the growing tension between Waxman and everyone else on set clues the audience in that film is going to be an utter fiasco. Unfortunately, we never get to see the finished product, which is a terrible shame because, while it might have been terrible, I felt like I would rather have watched Val Waxman's The City That Never Sleeps because it would have at least been interesting, whereas Hollywood Ending was not.

Much as in the case of The Curse of the Jade Scorpion, the main problem with Hollywood Ending lies in its pacing. Allen has a set up which could potentially make for a fun, lively comedy in which Waxman and his confidantes try desperately to trick everyone around them, but the story is told in such a leaden, plodding manner that it never develops any comedic momentum. Long, slow scene follows long, slow scene. While Allen and his cast try their best to make their lies work, there is only so much they can do against the numerous long takes in the film which, while technically well done, kill any rhythm or timing between the actors and don't do anything to make the jokes land.

As Waxman, Allen struggles with a role that requires a lot of slapstick, something which he was adept at when he was in his 30s but which, at the age of 66, he was not terribly well suited for. However, his inability to see and the numerous misunderstandings that result from that are the main driving force of the movie. Not only that, but the kinds of jokes Val's condition is used for get repetitive very, very quickly: There are at least five moments where someone requires Val to make a choice between two items, so he tries to bluff his way through by just saying "that one" without any physical indication of which one he means. It's mildly amusing the first time and it only suffers from diminishing returns from there.

Allen doesn't even seem that committed to the bit, and so often has Val talking to people while looking at nothing that it undercuts the reality of the film. It's so obvious that he's blind, yet no one seems to notice until they are told about it, that it cuts any tension out of the subterfuge. Maybe there's a satirical point in there about how people in the movie industry are so self-involved that they don't notice something that's right under their nose. There is one scene, in which Val goes to meet the studio executive (Treat Williams) who is now engaged to Ellie, that seems to hint at that idea, but if that is the point that the film is trying to make then it's a very muddled one. Most of the inside baseball aspect of the film falls fairly flat as well, possibly because Allen has been fortunate to have a career where he doesn't have to beg to get his projects made, so doesn't have the requisite insight into the studio system to really make his barbs sting. There's no specificity to the satire: It feels like it could have been written by someone who only knows about film-making from watching films about film-making.

The stuff outside the production of The City that Never Sleeps is a little better, though so much of the film is dedicated to that side of things that it hardly matters. Leoni and Allen have a good rapport and spark off of each other well - even if the film does fall into the vaguely creepy trap of Allen seeming to use his films as an excuse to kiss much younger women - and the script does have some pretty solid one-liners and comedic set-pieces, it's just that Allen doesn't do anything, as either actor or director, to make them work off the page.

Hollywood Ending is not a fiasco in the way that Val Waxman's film eventually is, but it is something worse: it's nondescript. It starts then finishes, have made no noticeable impact beyond passing time. The only things that are really notable about it are the things that don't work: the pacing, the lack of commitment to the central idea and Debra Messing, who gives a woefully broad performance as Val's current girlfriend. The stuff that works is either so marginal as not to matter, or boils down to basics like shots being in focus. It's not a badly made film, it might not even be a bad film, but the best that can be said of it is that it exists. Anything beyond that would be ridiculously charitable.