Film Review: The Curse of the Jade Scorpion (2001) 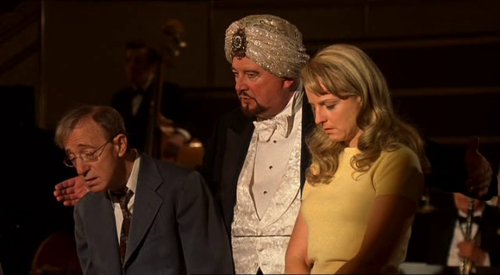 Though his work in the '90s was not as consistently great as in the '70s and '80s, it was one of the most interesting periods of Woody Allen's career. Whether as a reaction to the tabloid furore that followed his very public and acrimonious split from Mia Farrow or as a natural extension of his evolution as an artist, a harsh darkness began to creep into his films. This reached its peak with his last three films of the decade, which ran the gamut from bittersweet (Sweet and Lowdown) to just plain bitter (Celebrity and Deconstructing Harry). It was a triptych which contains some of his most bracing and uncompromising work, for better or worse, but marked him as someone who still has a lot to say.

Yet as the new millennium dawned, Allen seemed to retreat away from that strand and returned to directing the sort of lighthearted, quip-heavy comedies that defined his earlier work. Yet while there was plenty to like about the Ladykillers-esque caper Small Time Crooks, it still felt a little bit off. The script still had that Woody Allen snap, but the film felt very different, like someone else was trying to ape an early Woody Allen film and had somehow convinced him to star in it. That sense of otherness is much more pronounced in The Curse of the Jade Scorpion, a film which ably illustrates pretty much everything wrong with Allen's awkward early '00s work.

Allen stars as C.W. Briggs, an investigator working for a New York insurance agency in 1940. As the film begins, Briggs has just used his wiles to find a missing Picasso, saving the company from having to pay a huge amount of money for the claim. It's a victory for Briggs, but he doesn't get chance to revel in it as he discovers that the new efficiency expert, Betty Ann Fitzgerald (Helen Hunt) has moved all of his files out of his office. This marks the latest in a long line of battles between the street-smart, intuitive Briggs and the more cerebral Fitzgerald, who fundamentally disagree on the role investigators should play in the history of the company.

While out celebrating a colleague's birthday, the two are brought onstage by a hypnotist (David Ogden Stiers) who places them under post-hypnotic suggestion using a small jade scorpion and makes them act as if they love each other, to the delight of the others who know better. It's all a bit of fun until Briggs receives a late night phone call from the hypnotist, who uses the trigger word "Constantinople" to control him, then forces him to rob houses that Briggs himself had helped secure. In the light of day, Briggs is put in charge of figuring out who was responsible, and he immediately deduces that it must have been an inside job, not realising just how right he is.

The Curse of the Jade Scorpion is, at heart, a farce filled with plenty of miscommunication, misunderstanding and a hint of mysticism, yet what is needed for farce to work is clockwork plotting combined with furious pacing so that people can't see the gears moving. While Allen's script has a decent structure, its pacing is much too slow, making the machinations feel leaden and obvious when they should fly by. In contrast to something like Love and Death, or even a weaker effort like A Midsummer Night's Sex Comedy, the editing lax, with scenes dragging on in their attempts to relay fairly simple information. This is particularly bad during the moments when Briggs is hypnotised since they require Allen to speak in a dazed way that slows things down from an amble to a crawl. While there are still plenty of good lines - Allen can write snappy dialogue in his sleep, and there's little evidence to suggest that he didn't do just that - they're small pleasures that don't stave off the sense of stagnation underlying the whole thing.

It doesn't help that Allen is not great as the lead, something which he has freely admitted to subsequently, claiming that the cost of production - The Curse of the Jade Scorpion remains the most expensive film of Allen's career - prevented him from reshooting scenes until he got the best performance out of himself. It's also apparent that as a performer he no longer had the alacrity required for a role so reliant of speed, and that the slower, more passive quality that benefited his performance in Deconstructing Harry wasn't suited to screwball comedy. If he had made the film twenty years earlier, he would have had the perfect mix of physical and verbal dexterity, but in this case he probably would have been better off casting someone else. (In my fantasy version of the film, I think John Turturro would have been ideal.)

More than the fact that Allen had changed as a performer, he had also changed markedly as a director since his self-described early, funny films. If there is one thing that hurts The Curse of the Jade Scorpion as a Woody Allen comedy, it is that it lacks the inventiveness that made his best comedies great. There's none of the visual wit that marked his best work, but there also isn't the emotional depth or insight that made his more grounded comedies so interesting. With nothing to fill that gap, it just amounts to a series of fairly funny jokes told at much too languid a pace.

Despite all these problems, The Curse of the Jade Scorpion isn't a bad film, but it is a film which is frustratingly close to being much, much better. It has a great supporting cast which includes Dan Aykroyd, having a ball as Brigg's boss/Fitzgerald's love, Charlize Theron as a Lauren Bacall-like femme fatale, and Wallace Shawn being his typically wonderful self. It also looks wonderful, capturing the essence of '40s noir despite replacing stark black and white with soft earth tones, and the dialogue between Allen and Hunt is rife with fun verbal sparring. But Allen's lead performance and the weirdly slack editing stop it from being anything other than merely diverting, which is a pretty damning thing to say about a Woody Allen comedy.