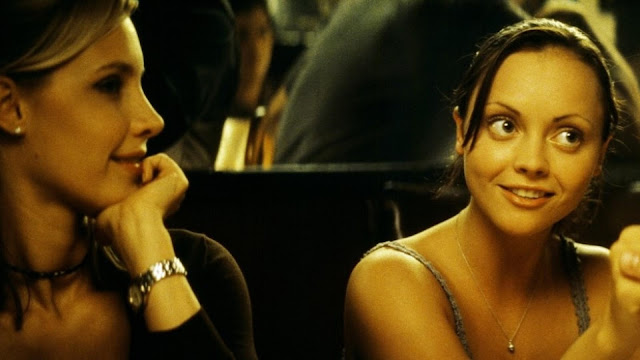 By the time that Anything Else was released in 2003, Woody Allen was in something of a rut. His previous three films saw him following a very similar pattern, making film after film after film in which he starred as a hapless, down on his luck guy who gets caught up in a caper beyond his control, with each film feeling a little more tired and strained than the last. While Anything Else didn't exactly set the world alight ten years ago - it received much the same mixed response that his other contemporary films had - in retrospect it looks like a much more interesting picture, if only because it marked a clear change from the kind of films he had been making. It might not have done much to reverse the consensus opinion that he was in a slump, but it does mark the point at which he seemed to start pushing himself again.

The most radical and readily identifiable change on display was the decision to shoot in the anamorphic aspect ratio, something which he had only done on Manhattan, and which gives the film a visual richness and depth that his other films, which had grown increasingly claustrophobic and play-like, did not. That grandeur might seem a little out of place when used to tell the story of the neurotic travails of a young comedy writer (Jason Biggs) and the problems he has with his girlfriend (Christina Ricci), her mother (Stockard Channing), his agent (Danny DeVito) and his mentor (Woody Allen), but at the very least the film doesn't look like a previous Woody Allen film. More importantly, in terms the other films he was making at the time, it doesn't move like a Woody Allen; it's faster, snappier, and altogether seems a lot livelier than the laboured capers he'd been busying himself with. It still goes on too long, but at least it's long because a lot of things happen quickly, rather than because a few things happen slowly.

Aside from the visuals, the other major change Anything Else represented was in how Allen related to his own films as an actor. It marked the first time that he appeared in one of his own films as a supporting, rather than a lead (or, in the case of Crimes and Misdemeanors, co-lead) character. It's a pretty major shift for Allen, who established his career as a leading man only because he was able to write and direct the films he wanted to make, but it was also a necessary one, coming as it did after a series of films in which it became apparent that he no longer fit the lead roles he was writing.

Freed from carrying the weight of the whole film on his shoulders, his work in front of and behind the camera improves noticeably. His performance as David Dobel finds him more relaxed than he had in years, making his philosophy-heavy conversations with Jerry Falk (Biggs) feel far more natural than some of the stilted discussions that peppered Hollywood Ending. He also explores new territory as an actor, making Dobel not just an intelligent, verbose and emphatic man - sort of Alvy Singer 25 years later - but also borderline psychotic. Maybe it's not entirely new territory for Allen as an actor, more a case of him clearing woodland that he already owned, but it definitely feels like he was flexing his muscles for the first time in a while.

In terms of the story, it finds Allen returning to the loose, picaresque structure of some of his best work, essentially allowing him to write scenes that illustrate the characters without any bigger plot to get bogged down in. Drawing on Allen's own experiences as a young comedy writer, he casts Biggs as a man wracked by self-doubt and insecurity, unable or unwilling to make any change in his life, be it professional or romantic. His agent has been unable to land him any decent work, yet Jerry can't bring himself to sever ties when his contract is up. His relationship with his girlfriend Amanda has hit similarly rocky ground since the two haven't had sex in six months. They've reached an impasse. She says that she still loves him, and he can't imagine ending it; every relationship he has ever been in has only ended due to the other person leaving. In short, it's a film about personal inertia, with the only sage advice coming from the impish, slightly unhinged mind of David Dobel.

The film that Anything Else recalls, thanks to the connections it has to Allen's own history, its stream of consciousness plotting and the repeated instances in which Jerry talks directly to camera, is Annie Hall. It's not a comparison that it can withstand, largely because the story of a man who can't decide what to do is less interesting than the birth, life and death of a relationship, but it does illustrate what a break the film represented. Even if Allen was using some old tricks, they were at the very least old tricks that he had not used in a while, and he was putting them to use in order to tell a story that he hadn't told before, mixing some of the bitterness of his late '90s work with the energy and invention of his earlier days. After a few years of stagnation, it certainly felt fresh, even if it was made from reconstituted parts.

The main thing that holds the film back from being a genuinely good, even great film is, unfortunately, Jason Biggs' performance. I say unfortunately because I do think that Biggs is a charming actor who does his best, but he struggles to balance the artificial, postmodern aspects with the scenes of Jerry actually interacting with the people in his life. Allen could do it in Annie Hall because he had a background in stand-up, and stand-up is about being able to appear natural in a highly unnatural environment, while at the same time acknowledging that the environment is unnatural. As an actor, Biggs manages the first part but not the second, and there's a distinct and distracting awkwardness in any scene where he has to address the audience.

His discomfort at having to maintain that balance is particularly obvious when compared to the performance given by Christina Ricci, who does a wonderful job at balancing the need for Amanda to be beguiling and sexy without also hiding the fact that she is something of a nightmare to live with. Her collection of foibles, such as her disorganised nature, her habit of rationalising everything bad she does until it is positive and her disregard for Jerry's feelings, could have made her a monstrous figure, but Ricci is so winning that she makes it obvious why Jerry would want to stay with her. Even if it is through inertia, it's an inertia born of deep affection and aching desire.

Apart from Biggs, who isn't bad, just uncomfortable, Anything Else works much more smoothly than its title, which suggests cloying desperation, might suggest. It's kind of hard to argue that it is good as a film separate from its place in Woody Allen's filmography, since it is frequently awkward and ultimately ends with a non-committal, pseudo-profound shrug that is pretty weak. However, it is probably one of the more essential films from his fallow period because it demonstrated that he was making a film a year not merely out of habit, but because he still had things to say. He might not have said them as well as he would have liked, but they were definitely worth hearing. Any work of quality he made subsequently owes at least some debt to the revitalisation on display in Anything Else.