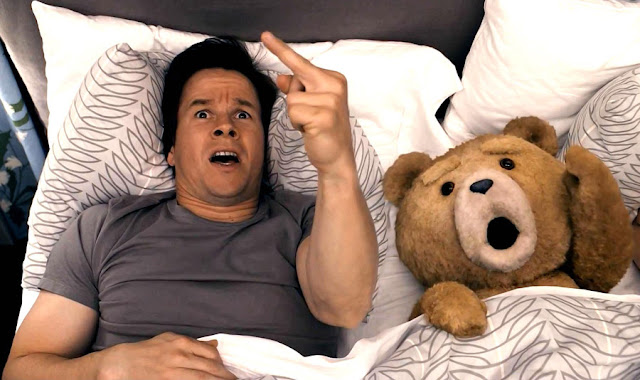 Growing up in a town just outside of Boston, John Bennett was such a thoroughly lonely child that he even  envied the Jewish kid everyone else on the street would regularly beat up. So one Christmas he wished that the stuffed teddy bear he received as a present would come to life so that he could finally have a friend. Since there is nothing more powerful than a child's wish (other than military hardware) that wish came true, and John and Ted vowed to be best friends forever. Fast forward twenty-something years and John (Mark Wahlberg) and Ted (voiced by writer-director Seth MacFarlane) share an apartment together where they routinely waste their days getting spectacularly high whilst watching Flash Gordon. When this behaviour endangers John's chance for a promotion, as well as his relationship with his girlfriend Lori (Mila Kunis), John is forced to choose between growing up, or getting rid of his best friend/stuffed toy.

At heart, Ted is a foul-mouthed cross-breed between the story of a developmentally arrested manchild who needs to face up to his responsibilities (a type of story that is so often favoured by raunchy comedies and earnest independent films alike) and a high-concept '80s kids film. This gives the film a surprisingly well worked out story - or perhaps this is only surprising since MacFarlane, as the creator of Family Guy, has become synonymous with a style of comedy that forgoes even the pretence of a story in favour of jokes. In fact, he proves to be a fairly adept storyteller, both from a structural and visual standpoint. The film isn't  stunning to look at or anything, not that a comedy really needs to be anyway, but it's put together well and the shots are nicely composed, whilst Ted, who is a really good CGI creation, feels like a natural part of the world he inhabits, apart from the obvious fact that he's a supernatural stuffed animal.

In some respects, it actually improves on the aspects of its story which it cribs from other sources. For example, the film goes out of its way to show what a nice, considerate and charming guy John is when he is around Lori, presenting a vaguely plausible reason why an ambitious, intelligent woman would stay with someone like John, something which the vast majority of films based on that central dynamic fail to do. It also attaches some importance to John's friendship with Ted, creating some emotional stakes with regards to their relationship and how it might potentially be changed.

Similarly, the film makes a point of exploring the way in which Ted's existence would play out in the real world, rather than just having him be magically alive and leaving it at that. During an opening montage showing John and Ted growing up together, the film details how Ted became a celebrity for a brief period and how that fame ultimately went to his head before fading away. The film is less clear on how and why Ted can get high or have sex with a human, both of which he does during the course of the film, but when a film is about a frequently drunk talking teddy bear, a bit of leeway can be granted with regards to the mechanics involved. Basically, Ted is a much more considered film than might be expected given the basic set-up.

Yet all of that is incidental to the key question that needs to be asked of any comedy; is it funny? The answer to which is, "Yes, much of the time." The script, by MacFarlane and Alec Sulkin and Wellesley Wild, two of his Family Guy cohorts, is filled with jokes, both verbal and physical, and there are a number of scenes in the film that rank as some of the funniest things I've seen for some time. There are also some clever ideas lying behind those scenes, such as the decision to film a fight between John and Ted with all the immediacy and intensity of a Bourne film, and relatively little of the lazy cutaway gag style that has become, fairly or unfairly, MacFarlane's trademark. (There are some instances, but they are sprinkled fairly sparsely throughout the film so they actually have an impact.)

However, there is a difference between a high gag rate and a high hit rate, and for every joke in Ted that works there are about three or four that die a death. There's only so many times that you can hear a talking bear swear or make an obtuse pop culture reference before the novelty begins to grate, and try as he might, MacFarlane largely fails to make the rest of the cast as funny as Ted or John. (It helps greatly that the film can lean on Wahlberg's game goofiness and general affability whenever a bit falters, a characteristic that a lot of the supporting cast lack.) As a result, recurring jokes such as one about how John's co-worker (Patrick Warburton) might be part of some sort of secret gay Fight Club, or the question of whether Lori's sleazy boss (a criminally under-used Joel McHale) is trying to sleep with her wind up feeling like dead weight on a story whose frame was fairly light to begin with. The only character who does manage to approach the comedy potential of the central duo is Donny, played by Giovanni Ribisi, who acts as the main antagonist and as such spends much of the film acting weird and disturbing, which pays off nicely when the film goes in a strangely Hitchcockian direction for its final act.

There is also an essential cruelness to many of those jokes that may make the film unpalatable, which is a hurdle that some viewers won't - and shouldn't be expected to - overcome. MacFarlane has spent much of his career to date pushing the boundaries of what is acceptable on television, and freed from the restraints of that medium, he lets loose, with results that are, by turns funny and regrettable. The proportion of those two results will differ greatly from viewer to viewer, dependent on individual tolerance for cruel and malicious humour, suggesting that this new stage of MacFarlane's career may prove just as divisive as the last.

The most important thing that needs to be said about Ted, though, is that whilst not every joke hits, those that do hit, hit hard, and it's largely due to the impact that those jokes have, rather than the frequency with which they occur, that causes the film to wind up being an above average comedy. It's by no means relentlessly or consistently funny, but when it works, it delivers on the crazy promise of its premise.