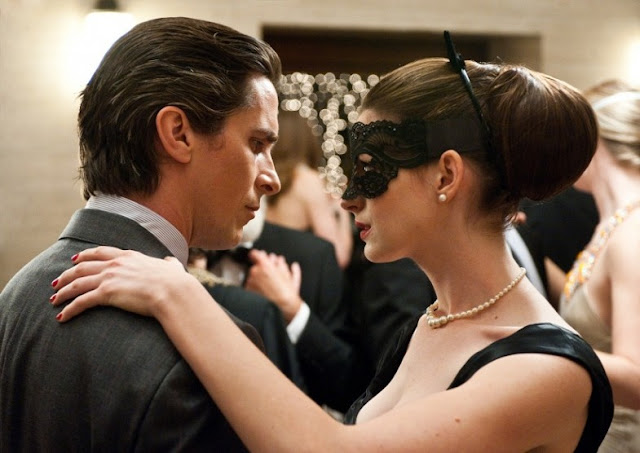 Ever since he revitalised the franchise with Batman Begins in 2005, Christopher Nolan has used the character of Batman/Bruce Wayne and the setting of Gotham City as a prism through which to view the fears and tensions of contemporary America. This was especially explicit in the second film, The Dark Knight, which posited Heath Ledger's Joker as a chaotic, unstoppable force of destruction with nothing to lose. In short, he was a nervous and unhinged personification of the spectre of terrorism, complete with recorded messages of violence, political assassinations, and destruction on a massive scale.

Nolan also used the battle between Batman and The Joker to examine ideas about anarchy and control, contrasting the freewheeling nihilism of the former with the rigid, fascistic control of the latter, all the while delivering a film that worked as summer spectacle even as it delved into dark ideas that conventional wisdom says people go to the cinema to avoid. Nolan's great achievement with the franchise has been that he has managed to sneak political commentary and potentially subversive ideas into a series of hugely popular blockbusters without seeming to compromise on either half of that equation. The films have remained smart and entertaining without ever becoming more of one than the other.

That trend continues with Nolan's final film in the series, The Dark Knight Rises, which finds him engaging with the underlying resentment between the mega-rich minority and the poor majority in the wake of the global recession, which in recent years has given rise to the Occupy movement, and stoked the flames of class war to an intensity that has not been seen in decades. It is this animosity that the film's masked villain, Bane (Tom Hardy) manipulates in his plan to destroy Gotham city; by drawing upon the poor, the disaffected and the disenfranchised, he seeks to act as "Gotham's reckoning," and to put an end to the decadence of a city whose elites have, to paraphrase Selina Kyle (Anne Hathaway), lived too large for too long, leaving so little for the rest of its citizens. Once again, Nolan infuses his superhero opera with real world concerns, lending a great weight to proceedings whilst raising difficult questions about society that he disconcertingly chooses not to answer.

The film takes its time reaching that point, though. In fact, in stark contrast to its predecessor, which all but started with Batman kicking ass and taking names, it takes its time even getting to Batman. When first we meet Bruce Wayne, we learn that he has become a Howard Hughes-like recluse who has withdrawn from a world which he has helped to reshape. Following the death of the half-mad Harvey Dent, which Batman took the blame for in order to protect Dent's reputation, the city introduced legislation giving the police sweeping powers to tackle organised crime, which has led to the city becoming a place that no longer needs Batman, primarily because its clandestine protector has been replaced by a police state.

Wayne is drawn out of seclusion after Selina Kyle breaks into his house and steals something from his safe, though she is really after something else entirely, and his fascination with her leads him to a larger conspiracy, one which requires him to don the cape and cowl again, and eventually leads him to face Bane. As played by Tom Hardy (though the mask means we only see his face once, in flashback; the rest of the time he is heard in distractingly clear voiceover), Bane is a terrifying figure of imposing physical prowess and fierce, efficient intellect. In that respect, he represents the most formidable opponent that Batman has yet faced, since not only is he capable of implementing a dizzyingly complex plan that fundamentally alters Gotham, one that even overshadows the crazy machinations of The Joker since it is carried out with such cold, meticulous care, but he is also an unstoppable force capable of dealing immense damage: he has the power to break Batman both physically and spiritually, and as such The Dark Knight Rises winds up being the first Batman film in which it feels like the character is actually in danger.

It's also probably the best that Christian Bale has been in the role over the course of the series, since he has to go the furthest distance; charting a downfall and a rise that, even over two and a half hours, feels like it is only barely covered. The film also finds new, incredibly poignant ground to mine from the relationship between Bruce and Alfred (Michael Caine), who wind up at loggerheads over whether or not Bruce should become Batman again. As a man who has already buried two members of the Wayne family and just wants the surviving one to be happy, Caine gives a moving and at times heartwrenching performance that nicely draws upon the relationship that the audience has developed with him over the three films.

Owing to the number of new characters that the film has to introduce - alongside Bane and Kyle (who, interestingly, is never actually referred to as Catwoman) there's John Blake (Joseph Gordon-Levitt), an idealistic cop who plays a large role in getting Batman back in the game, Miranda Tate (Marion Cotillard), a member of the board of Wayne's company who wants him to invest in sustainable energy projects, and Foley (Matthew Modine), a senior detective who is gunning for Commissioner Jim Gordon's (Gary Oldman) job - as well as the need to establish what has happened to series veterans like Oldman, Caine and Morgan Freeman, the opening act feels awkward and more than a little messy. This isn't a particularly huge problem for the film overall, though, since even as it clunkily gets into gear, it manages to include a jaw-dropping sequence in which an aircraft is torn apart in mid-air by another aircraft, and perfectly establishes the combative/flirtatious relationship between Batman and Kyle. However, it does result in the film lacking the clear focus of either of its predecessors, as Wayne becomes a side-character until he is ready to get back to his old tricks, in the process leaving the film without a central character for much of its first hour.

As the story progresses, and it becomes apparent just how crazy and ambitious Nolan and his collaborators intend to make their film, the messiness of the film becomes a large part of its charm. Much as was the case with The Dark Knight, the story unfolds in ways which are bold, exciting and, most importantly, unpredictable. It is fully possible to guess what is going to happen in broad strokes - particularly if you are the sort of person who has read any of the speculation that has built up around the film in the last four years - but the events themselves unfold in a way which dwarfs even the expectations one might have after the first two films. On his last go-round, Nolan unashamedly aims to create an epic, and once all the threads start converging in its sublime third act, the messy sprawl of The Dark Knight Rises starts to take a more defined shape. It still seems rougher around the edges than the first two films, but it also reaches a lot further than either in terms of scope, ambition and sheer audacity.

Whilst The Dark Knight Rises is ultimately a sloppier film than any of Nolan's previous efforts, both in and out of the Batman franchise, it is also one that paints on a much broader canvas. Since every aspect of the film is turned up a notch, the flaws are intensified just as much as its strengths are, but the things that it does well it does so very well that the flaws don't really amount to much. It works as spectacle, delivering visceral and astonishing moments that are shocking and surprising, it works as allegory, raising questions about contemporary society and the disparity between wealth and poverty, and it works as a grand finale to a great trilogy. It fumbles a little in the beginning and the middle, but absolutely sticks the landing, which makes for a wonderfully satisfying ending. Good luck to whoever takes over the series after Nolan and co. depart.


If you would like to hear a more detailed, spoiler-filled discussion of the film, then please check out the special Dark Knight Rises episode of the Shot/Reverse Shot podcast, in which Joe Gastineau and myself examine the film at length, and put it into the broader context of Christopher Nolan's work.
By Edwin Davies
Labels: 2012, Action, batman, blockbuster, British Cinema, Christian Bale, Christopher Nolan, comic books, film, film review, summer, superhero
Newer Post Older Post Home