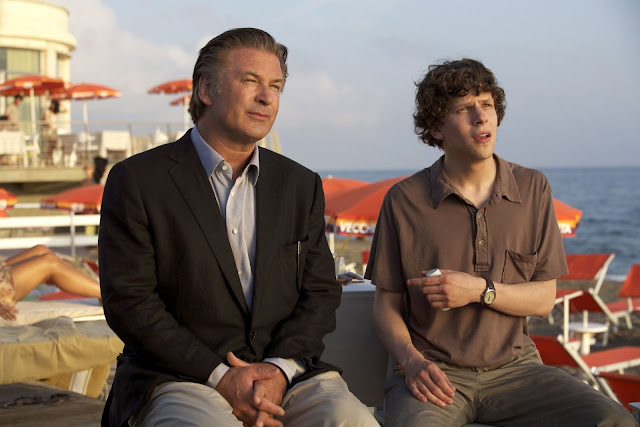 Though the films Woody Allen has made since decamping from his New York stomping ground have varied in terms of story, tone and style, one of the main consistencies has been that each new city he has visited on his European Vacation has invigorated the resulting work. This is particularly noticeable with his latest film, To Rome With Love, since, whilst it bears a number of similarities to his pretty woeful London-set 2010 film You Will Meet A Tall Dark Stranger - both are films set in a major European city, both are ensemble comedies, and both consist of disparate stories connected almost solely by location - the former film is actually a lot of fun, whilst the latter was a terrible chore. There's a vivaciousness to the film that suggests that Allen enjoys exploring a great city on screen almost as much as he does telling a story set in that city, and that sense of discovery then infuses the story itself with new life. The quality of his trips to Paris and  Rome suggest that a change of scenery does the veteran director a world of good, so long as he doesn't hang around for too long.

Whilst the four stories that make up To Rome With Love are unconnected by narrative - they all happen separate from each other over different time frames; some take place over a single day, others over the course of a week or so - they all share the theme of characters getting to live out their dreams or fantasies, with mixed results (both for the characters and for the audience). The ways in which these fantasies are realised vary in terms of their execution, with the most down to earth being the story of a married couple (Alessandro Tiberi and Alessandra Mastronardi) who move to Rome so that the husband, Antonio, can take up a job working for his uncles. Through happenstance and misunderstandings, the two get separated, and Antonio winds up having to take a prostitute (Penelope Cruz) who mistakes him for a client to meet his uncles and their business partners, whilst his wife wanders the streets of Rome, and ends up meeting a variety of incredibly famous and glamorous film stars.

Considering how farcical that sounds, it says something that it is far and away the most grounded of the film's stories, and as such is the one that takes the longest to get going, and is ultimately the least interesting. Once it revs up, it is entertaining, largely thanks to the way in which Tiberi's awkwardness plays against Cruz's effortless confidence, but by that point it has already been overshadowed by the other strands of the film, which are more overtly fantastical and, as a result, get going a lot more quickly.

It's also notable that all three of the other stories revolve around the older members of the cast - Alec Baldwin, Woody Allen and Roberto Benigni - and so contrast the fantastic elements against feelings of regret or longing. This balance is best maintained in the story of John (Alec Baldwin), an American architect who, wistful about his youth spent in Rome, revisits his old neighbourhood. Once there, he encounters Jack (Jesse Eisenberg), a young architect who, recognising John from a magazine story, invites him into his house to meet his girlfriend, Sally (Greta Gerwig). John becomes something of an observer of and adviser to Jack, as he starts to fall in love with Sally's neurotic actress friend, Monica (Ellen Page), whose mix of flirty sensuality and seemingly vast knowledge of art, poetry and philosophy make her irresistible to Jack.

It becomes clear fairly early on that John is reliving and commenting on his own youthful indiscretions, and Baldwin is wonderful as a man who bemoans the stupidity of his younger self for falling for someone who, in hindsight, John realises was not the person that he thought she was, whilst also envying the freedom and idealism that allows Jack to do precisely those sort of dumb things. He gets to enjoy the fantasy of reliving the experience with the benefit of age and wisdom, even though neither of those things ultimately make a blind bit of difference. It's easily the best individual strand of the film since it best achieves the balance between humour and pathos that Allen used to excel at, but which often eludes him these days.

However, whilst the Jack-John-Monica storyline might be the best part of the film, it's not the funniest. That honour belongs to the Allen-starring segment of the film, which finds him stepping in front of the camera for the first time since 2006's Scoop. From the first scene of his character, Jerry, freaking out over turbulence as his plane comes into land, Allen is at his rapid-fire, bewildered best. It helps that the story itself finds Allen embroiled in a situation which gets gradually and steadily more ridiculous, in a similar vein to a lot of his classic out-and-out comedies. Jerry and his wife Phyllis (Judy Davis) are visiting their daughter Hayley (Alison Pill), who met a man named Michelangelo (Flavio Parenti) whilst on vacation, fell in love, and got engaged. Jerry is less than thrilled by the prospect, though this has more to do with his fear of death, which has become exacerbated since he retired from his job in the music industry since he considers retirement to be the last stop on the road to dying. It also doesn't help that Michaelangelo's father, Giancarlo (Fabio Armiliato) is a mortician.

He also has an amazing voice, and Jerry becomes obsessed with trying to get Giancarlo to perform on stage, thereby fulfilling his dream of getting back to work, and Giancarlo's dream of being an opera singer. The one problem with the scenario is that Giancarlo can only sing when he is in the shower.  It's pretty easy to extrapolate where the storyline is going from there - heck, The Flintstones did exactly the same story fifty years ag -, but what sets Allen's take apart is the commitment brought to it, as well as the way in which the climax of the story is staged with a kind of deadpan ridiculousness which makes for an hilarious capper to a story that serves largely as genial set-up for a big punchline, one which Allen hits perfectly.

The final storyline of the film is the slightest, but it gets by on the charm of its lead and, once again, Allen's ability to ramp up a story from fairly humble beginnings to heights of ludicrousness. Leopoldo (Roberto Benigni) is an ordinary, unspectacular office worker who struggles to make his voice heard, even though he has plenty of opinions that he wishes to share with anyone who listens. Leaving his house one day, he discovers that he has become the most famous man in Italy, hounded day and night by reporters who want to know his every thought and to catalogue what he has eaten for breakfast, and suddenly presented with all the perks and advantages that come from being outrageously famous. It's a cute idea that touches on the ephemeral nature of fame, particularly in an age where increasing numbers of people are famous just for being famous, but aside from a very winning performance by Benigni, it feels a little tossed off and inconsequential. Funny, but ultimately not as funny as Jerry's story, or with as much depth of feeling as the John storyline.

To Rome With Love is unlikely to be classed as one of Allen's great works, but it's a breezy, clever and, more importantly, funny comedy that showcases many of the director's strengths. The only major knock against it would probably be to do with its structure; it's basically an anthology of four shorts, but the shorts are intercut into each other, which often disrupts the rhythm of the storytelling . Just when you're getting into one story, the film drags you out of it and makes you watch one that might not be as funny or interesting, which harms both by stunting the development of one and making the other suffer by comparison. It's by no means a fatal blow to the film as a whole, but the presentation does mar the individual parts.