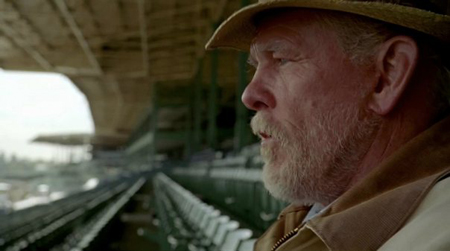 For this edition of Hope Lies on Television, I decided to take the opportunity to write about my current obsession, HBO's Luck, the horse-racing drama from David Milch and Michael Mann. I've been thinking a lot recently about the changing nature of television in the era of heavily serialised dramas, and wondering whether or not we are heading towards a television landscape where television shows air almost as an obligation, since people will probably not watch them until the whole series has air and been recorded on their DVR, or released on DVD.

Luck, to me, seemed to indicate a way in which serialised dramas can compel people to watch every week by offering small, beautiful moments that might lose their power if viewed on anything other than a weekly basis, and that is the overall theme that I tried to explore here. In the end, I think I just wound up saying how much I liked the show, which is no bad thing.

In a case of very unfortunate timing, the article went up on Hope Lies mere hours before it was announced that the show had been cancelled due to the accidental death of a horse on set, the third such incident since production began on the show. Considering that I love the show, this is a disappointing but completely understandable result: you can't make a show about horses and the people who idolise them and allow real horses to die without seeming hypocritical. Still, the column seems a little bittersweet now, and I'll really miss all the characters that Milch populated his little world with, and I'll especially miss the amazing opening credits sequence, which I hoped would run before many more stories over the next few years.