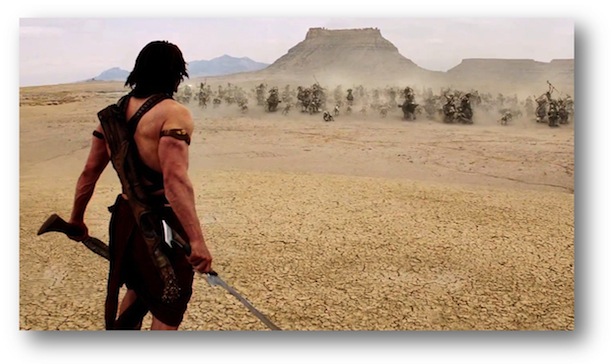 Influence is a double-edged sword. Innovators may achieve immortality through their work, and through that which they inspire, but there's always the risk that, as their influence spreads, their own ideas will start to appear outdated and quaint. That which was once startling and original will look cliched and tired, that which was once daring will look tame. Such is the problem that afflicts John Carter, which is based on the "John Carter of Mars" series of stories by Edgar Rice Burroughs, which first appeared in print one hundred years ago and became key texts in the creation of the space opera sub-genre of science fiction which gave the world Star Wars and Avatar, to name but two of its progeny. Considering that its source material inspired two of the most successful films ever made, it'd be surprising if John Carter didn't feel overly familiar.

The story begins in 1881, when John Carter (Taylor Kitsch), an eccentric millionaire who has spent much of his life on a series of mysterious expeditions, sends a telegram to his nephew, Edgar Rice Burroughs (Daryl Sabara) asking him to come immediately. Burroughs arrives to discover that his uncle has died suddenly, and that he has been made the executor of his estate. Amongst Carter's effects is a diary which tells the story of how, as a young ex-Confederate soldier wandering the American West, he was mysteriously transported to Mars - named Barsoom by its inhabitants - and became embroiled in a Civil War between the people of Helium and Zodanga.

John Carter faces an uphill struggle from the off since it has to establish several alien cultures simultaneously, get across how long the war between Helium and Zodanga has been going on, then establish who John Carter is and how he fits into the whole thing. As such, the first third of the film consists largely of director Andrew Stanton (Finding Nemo, WALL-E) cutting between different time periods and planets, throwing out reams of exposition in the hopes of relaying a bewildering amount of information in as little time as possible.

Stanton and his co-writers, Mark Stevens and Michael Chabon, try to get all the pulpy backstory out at the beginning but fail to do so gracefully. After two separate narrators try to explain what is going on, we are treated to a scene in which a captain of the US Cavalry (played by the brilliant Bryan Cranston) arrests Carter and reads from his record, telling us about how many awesome things he's done over the years rather than actually showing us. Though there are some nice touches in these scenes, such as the way in which Carter keeps interrupting the captain mid-sentence by trying to escape in increasingly ridiculous ways, it kills the momentum of the film and fails to really establish Carter as a character. It'd be like Star Wars introducing Han Solo by, instead of shooting Greedo, laboriously describing every crime he had ever committed.

As John Carter, Taylor Kitsch does what is required of him, which is to stand around in a loin cloth, hold a sword and then ask questions to advance the plot, but anyone looking for any of the soul or wit he brought to his role as Tim Riggins on Friday Night Lights will be disappointed. Saddled with a character who runs the gamut of emotions from reticent to stoic, he carries the film from scene to scene without seeming to have any agency. Dominic West, as the leader of the dastardly Zodangans, and Mark Strong, as a mysterious monk controlling events, have more fun with their obviously villainous roles, whilst Lynn Collins struggles with a faux-English accent to play the love interest, whose name might as well just be "feisty princess" for all the individuality she brings to the role.

The film begins to fare better once Carter gets to Mars/Barsoom and discovers that, owing to the weaker gravity on the planet, he is able to leap great distances and has enhanced strength. The scene in which Carter tries to come to terms with his new found agility is funny, though your reaction may depend on how much you enjoy watching someone fall over again and again, and there's a giddiness to the moment when he gets the hang of it and starts flying through the air with the greatest of ease. At its best, be it small moments like that scene or epic battle sequences in which Carter slices through foes like they were butter, John Carter has a sense of childish abandon to it that is infectious. There's even a surprisingly affecting sequence in which Carter's battle against a horde of creatures is intercut with flashbacks of him burying his dead wife and son, a scene that's more inventive and emotional than pretty much anything else in the film. Unfortunately the moments of spectacle are surrounded by largely airless scenes of characters explaining the plot to each other that are reminiscent of David Lynch's execrable Dune adaptation, a film with similarly extravagant visuals that was also undone by a plot that could be kindly described as convoluted, and unkindly described as nonsense.

In trying to stick to the pulp fiction origins of the books, John Carter feels every bit like a story that was parcelled out piecemeal over many months, rather than a single, coherent narrative. There's something quite charming about that, especially when contrasted with the state-of-the-art effects on display, which bring the four-armed, twelve foot tall Tharks and the vivid, barren landscapes of Barsoom to life. It feels as if, after a mere hundred years, technology has finally caught up with Burrough's imagination. It also feels completely uncynical. It's clear that Stanton cares about the material and wants to do it justice, rather than just churn out an identikit blockbuster. The combination of very traditional storytelling and cutting edge effects can work wonders - it was that same combination which gave us Star Wars and the Indiana Jones series - but here create the cinematic equivalent of a titanium abacus. It certainly looks cutting edge, but who needs an abacus anymore?