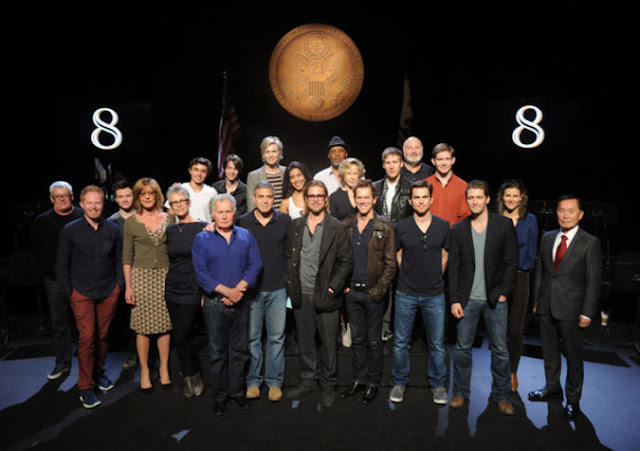 You've probably noticed my use of quotation marks in the title of this review, and they are not there because I have suddenly forgotten how grammar works - though chances are that I never fully knew in the first place - but to denote that this is not a review of a film since 8 is not a cinematic work, but a filmed play. In fact, it's so uncinematic that you don't need to see it in a cinema: the whole play is up on YouTube (and you will find it embedded at the bottom of this post). Yet it stars some of the biggest stars in the world, was written by Oscar-winning screenwriter Dustin Lance Black (Milk) and directed by Rob Reiner. For those reasons alone it'd be worth discussing, but considering that it deals with one of the most important and controversial issues in American politics today, it almost demands to be written about.

As established by a journalist (Campbell Brown) who acts as the narrator for the play, it is based on the transcripts of the case of Perry vs. Schwarzenegger, the case which resulted in Judge Vaughn Walker (Brad Pitt) ruling that Proposition 8, the statute which had made gay marriage illegal in California, was unconstitutional, marking the start of an ongoing campaign to overturn Prop 8. The proceedings were filmed, but the defendants in the case successfully called for them not to be released, purportedly because the arguments put forward in the trial which led to Walker's decision would hurt the anti-gay marriage argument if released. Since there is no visual record of the proceedings, Reiner and Black use the transcripts to create a truncated version of the trial so that people can get at least a sense of what those arguments were.

With the exception of linking scenes in which the plaintiffs, Sandy Stier and Kris Perry (Jamie Lee Curtis and Christine Lahti) discuss the details of the case with their two sons (Jansen Panettiere and Bridger Zadina) the entire play consists of depositions given by experts and the cross-examinations conducted by the lawyers (Martin Sheen and George Clooney for the plaintiffs and Kevin Bacon for the defence). Clooney and Sheen as David Boies and Theodore Olsen, respectively, delight in being able to deliver some killer lines and engage in some wonderful speechifying - Sheen's final monologue, in particular, is so moving that it's hard to believe that it was said by an actual person in real life before it appeared in the context of a play - and their turns sparring with Bacon's Charles Cooper give the play much of its backbone, connecting the individual testimonies which make up most of the story.

To deliver those testimonies, the production has assembled a superb selection of actors - many gay - who gradually fill in the arguments for and against gay marriage as the play progresses. These include Jane Lynch, George Takei and Jesse Tyler Ferguson, all of whom do great work, but the two standouts are Chris Colfer and John C. Reilly. Colfer, most famous for playing Kurt on Glee, delivers an absolutely devastating performance as Ryan Kendall, a young man who recounts the vitriolic response of his parents when he came out to them, and their subsequent decision to send him to a camp where attempts were made to make him straight. It's pretty hard to hear someone say that their own mother told them they wished that they had had an abortion rather than a gay son, and Colfer completely nails the mix of anger and hurt required in that and similarly brutal moments.

Reilly, meanwhile, nearly steals the show as David Blankenhorn, a bumbling sack of a man who is called as a witness for the defence, but winds up arguing that equal rights rulings apply to gay couples. Reilly mines a lot of laughs from the times when Blankenhorn clashes with Boies, but he also underpins a lot of the strongest, most emotive moments,  and the notion that Americans "would be more American on the day [they] permitted same-sex marriage than [they] were on the day before."

8 is by no means an impartial work: it is a play designed to argue a point - that gay marriage should be legal - and it does so forcefully and passionately. It manages to put its case across in a way which is compelling both intellectually and dramatically, and whilst it is unlikely to change the minds of those whose opinions won't be swayed, it does much to pierce the fog of fear and misinformation that has grown up around the subject of gay marriage, and that is a noble thing indeed.

You can watch the play in its entirety below: