Film Review: The Pirates! In An Adventure With Scientists! (2012) 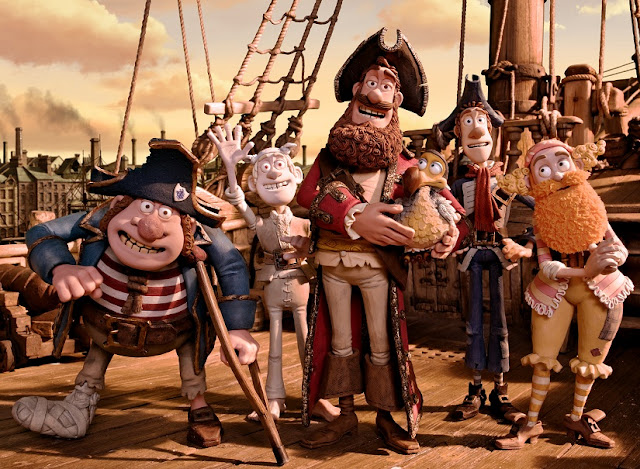 By this point, Aardman Animations have become such a cultural force in Britain that they have transcended being merely an animation company to being a national institution. Their wonderful and charming Wallace and Gromit shorts and their handful of features have made for some of the most beautifully crafted animated films ever made, thanks to the lovingly homemade quality that stop-motion animation affords to them. More importantly, each of their films has been imbued with a gentle sense of humour that is utterly charming, and has created an appeal that is universal. Their films can work for children, the elderly and everyone inbetween without condescending to or boring any one group.

That central appeal is pushed somewhat in their latest film, The Pirates! In An Adventure With Scientists! which noticeably moves away from the idiosyncratic humour of something like Wallace and Gromit in The Curse of the Were-Rabbit towards a broader style. There are still plenty of typically Aardman visual gags in the margins - there are some fantastic posters dotted around the film which practically demand that the film be re-watched a frame at a time to catch every gag - and it slips in some jokes that are pretty much only for a British audience (prime example: at one point a character holds up a picture of a cat with the name "Slocombe's" above it, which is one for all the under-10 Are You Being Served? fans in the audience) but the film's more manic tone and inclusion of jokes that are aimed at an American audience suggest that directors Peter Lord and Jeff Newitt, as well as writer Gideon DeFoe, are aiming beyond the converted on this one.

However, that is not necessarily to the detriment of the film, since whilst the style of the film differs from past Aardman works, The Pirates! is every bit as charming as those that went before it. The film hits the ground running by introducing The Pirate Captain (Hugh Grant), a perennially under-performing pirate who is desperate to win the coveted Pirate of the Year award in order to finally win the respect of his peers. After being humiliated in a bar on Blood Island - so called because it is in the shape of some blood - by his chief rivals (voiced by Jeremy Piven, Salma Hayek and Lenny Henry), The Pirate Captain and his crew (who are voiced by the like of Martin Freeman, Brendan Gleeson and Ashley Jensen) set off to go a-plundering in order to get enough treasure to win the prize, with less than stellar results. That is, until they meet Charles Darwin (David Tennant), who discovers that the ship's parrot, Polly, is actually the last Dodo, and hopes to use her to win Scientist of the Year.

The main problem with The Pirates! is that it has so much plot to get through that, and it barrels through it at such a rapid-fire pace, that it occasionally feels a little unwieldy. The swiftness with which it takes its characters through the story is admirable, but it also makes the whole experience a little breathless. For that reason, the best section of the film is its middle-section, in which the crew spend time in London trying to win Scientist of the Year without getting exposed and killed at the behest of Queen Victoria (Imelda Staunton), who really doesn't think highly of pirates. There are lots of little asides and digressions in this sequence, such as a thrilling and funny chase sequence through Darwin's house, that benefit from being given a little time to breathe. It also helps that this section heavily features Mr. Bobo, Darwin's chimpanzee butler who communicates solely through surprisingly specific cue cards. Of the running gags in the film, Mr. Bobo's cards are the most consistent, and one of the great pleasures of the film is seeing the different ways that they are employed.

The return to the more dense and manic pacing in the final third does hurt the film somewhat since, as with its opening, the jokes are crowded out by the plot. On the other hand, it also manages to deliver a genuinely quite touching moment in which the crew all work together to save a friend (though, in keeping with the irreverent tone of the film, that moment is tinged with self-awareness to balance out the sentiment). It's also during this act that the film delivers some of its most fluid and exciting animation, which demonstrates just how great Aardman are at pushing stop-motion animation (albeit augmented by CGI) to its limits without ever looking like they are just showing off.

Whilst not on a par with Chicken Run or Curse of the Were-Rabbit, The Pirates! delivers a thoroughly entertaining experience that is packed with enough of their unmistakeable verve to allow the film to overcome its awkard pacing and occasionally too-broad tone. (Also, if nothing else, it will hopefully introduce a whole new generation of children to The Clash, The Pogues and The Beat, which is commendable.) It's thoroughly chaaaaarming.