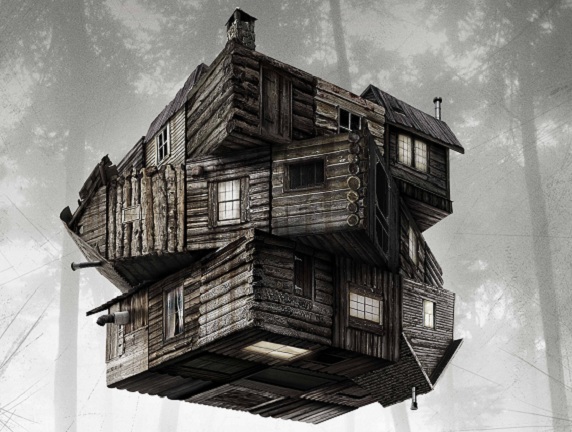 The Cabin In The Woods, the directorial debut of Cloverfield writer Drew Goddard, which was co-written by Buffy creator and all-round geek idol Joss Whedon, is great. It's genuinely fantastic. It's a thrilling, wildly inventive horror film that plays beautifully off genre cliches whilst also managing to make those cliches work in its own interests. It's a horror comedy which is both scary and uproariously funny, and I would be very surprised if there is a better mainstream American film released this year. If it isn't in my Top Ten at the end of this year, then there must be some damn great films ahead of us, because I can't imagine it being easily dislodged from that spot.

Unfortunately, it's also the sort of film that cannot be discussed without ruining all the fun. It's not that it is a film that hinges on a twist which, if revealed, would completely suck all the joy out of the experience, but the various turns it takes are so much fun that they are best enjoyed with as clear a mind as possible.

To that end, I am going to say right now that this review will contains no major spoilers, so reading it won't ruin any of its surprises. However, if you don't want to know anything going in, stop reading now. If you're wondering if you should see The Cabin In The Woods, then take this as a hearty recommendation that you should because you will not regret it. Heck, I'll save you the effort of scrolling down to the bottom of the page to see the grade. This is a solid, unqualified A. You will have a blast.

Now that is out of the way, let's delve into why The Cabin In The Woods is such fun. 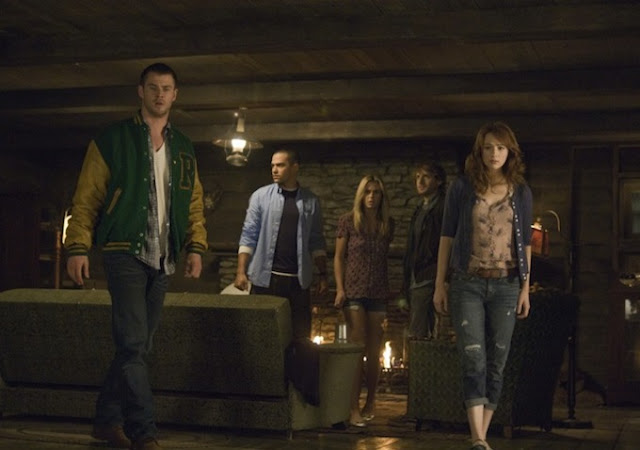 Right from its first scene, The Cabin In The Woods pulls the rug out from under its audience. After a short sequence in which the names of the cast and crew are formed in blood script over images of human sacrifice, we are introduced to two white-collar guys named Hadley (Bradley Whitford) and Sitterson (Richard Jenkins) as they talk about baby proofing and the problems that they are having with their wives over coffee. As they walk through a sparkling and modern facility that could not be further away from the cabin of the title, we learn that they are working on some project, that they are competing with the Japanese, and that there are high stakes. The scene ends when the title of the film appears to the sound of screams. Already, Goddard and Whedon are gleefully toying with us, and they're only getting started.

The film leaves Hadley and Sitterson alone for a while at this point, and introduces us to the main characters, a group of college students who are heading up to, let's say a small wooden house in, let's say a forest. There's Dana (Kristen Connolly), a bookish redhead who has recently been dumped by a professor that she was seeing, her best friend Jules (Anna Hutchinson) who is experimenting with a new blonde hairdye, Jules' boyfriend Curt (Chris Hemsworth), a sociology major who excels on the football field, and Curt's friend Holden (Jesse Williams), who Curt and Jules are intent on pairing up with Dana. Finally, there's Marty (Fran Kranz), a truly exceptional stoner who gets most of the best lines in the film. (My favourite, delivered when talking to a typical creepy hillbilly character about the benefits of the railroad: "The streets'll be paved with actual streets.") The five load up their camper and head out to the small wooden house in the forest, unaware that they are being watched, and that there are forces at work they cannot comprehend.

The Cabin In The Woods is the natural successor to Wes Craven's Scream, far more so, in fact, than any of the Scream sequels. It's a film steeped in horror lore, and genre fans will be delighted by the nods to classic iconography. The main thrust of the film obviously calls to mind The Evil Dead - the Cabin comes complete with easily broken windows and a basement full of assorted creepy-ass haunted bric-a-brac - but it also tips its hat to J-horror in a couple of hilarious scenes, the work of John Carpenter, and Hellraiser, to name but a tiny fraction of the tiny reference points that are dotted throughout the film. It also manages to tie in the thrill of horror cinema to the elemental allure of scary stories in every culture, finding a novel means of playing on the way in which different nations have developed their own unique strains of horror.

Yet the film is far more than just an assortment of familiar images and ideas. Like Scream, it's an incredibly intelligent and insightful critique of the standard tropes of horror cinema that also manages to be genuinely frightening in its own right, balancing its commentary on the way in which film-makers torture and butcher their characters for the purpose of entertaining an audience with moments of giddy, unabashed gore and violence. It's not an easy balance, but at no point is there any sense that Goddard does not know exactly what he's doing, and as the plot and mythology of the film spiral outwards, it feels both hugely surprising, yet completely natural to the world of the film. By the time you reach the finale, which is a ridiculously violent and wonderfully balls-out dive into gonzo horror, the film has reached a point that it would be impossible to envisage going in, but which feels completely right in the moment. That's a hell of a trick to pull off, and Goddard does so with aplomb.

As of right now, The Cabin In The Woods is my favourite film of 2012 thus far. It's hilarious, scary and it contains more wit and invention than you'll see in twenty other blockbusters released this year. Goddard and Whedon have created a smart, savvy dissection of a genre they love which is also a relentlessly entertaining example of that genre. It's a rare film that is as entertaining as it is intelligent, and easily one of the best horror films of the last decade. If you have even a passing interest in horror, then you have to do everything in your power to see it. But whatever you do, don't be a dick and ruin it for anyone.