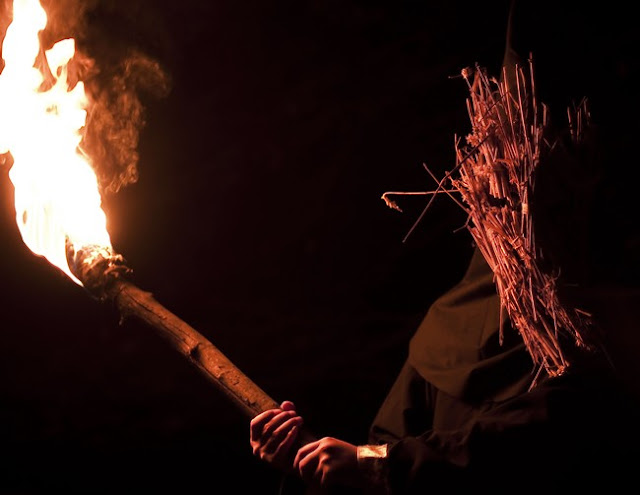 Jay (Neil Maskell) and Gal (Michael Smiley) are a pair of former soldiers turned hitmen who are hired by a mysterious group to take out people whose names appear on the eponymous list. Whilst the job starts out as fairly normal, things become increasingly sinister as ominous threats start showing up at Jay's house, suggesting this his wife Shel (MyAnna Buring) and son Sam (Harry Simpson) might be in danger if he continues on the path that he is treading.

To say much more about the plot of Kill List, the second feature from director Ben Wheatley, would be to ruin the fun of it. Like any good horror film, a lot of its best moments would be rendered tame if described out of context, without the great sound design or queasy sense of unease that permeates the film. Kill List is best understood by being experienced, rather than by picking over its best moments.

Then again, Kill List isn't the sort of horror film that has easily described money shots. There aren't that many identifiable setpieces designed purely to shock or terrify the audience - with the possible exceptions of several nocturnal excursions and a nauseatingly brutal scene involving a hammer - since the power of the film comes from an ever growing sense of dread that starts as a quiet, gnawing menace and ratchets up as the film progresses. It feels less like a film influenced by other horror films than one inspired by the works of Harold Pinter, particularly 'The Dumb Waiter', with its plot about two hitmen discussing the nature of their work and details of a specific job that they don't understand, and 'The Birthday Party', with its air of threat and menace surrounding a man who doesn't quite grasp why he is being threatened in the first place.

Much of the reason why Kill List is so scary is how unpredictable it is. The editing of the film is very choppy, with scenes that don't have conventional rhythms to them, that either start or end abruptly, or which go on for longer than you would expect. It's hard to tell what kind of scene you're going to get at any moment, and the inclusion of the aforementioned hammer scene very early on in the film removes the safety net by making you uneasy about the intentions of the film-makers. There's something slightly dangerous about Kill List, a quality only found in films like the original Japanese Ring or the original Texas Chainsaw Massacre.

Adding to the disorientating nature of the film is just how funny it is. Ben Wheatley's background is in television comedy, and the script has lots of very funny little asides and quips thrown in to even the bleakest moments of death and mayhem. It's a major boon to the film that there is a natural chemistry between Maskell and Smiley that is irresistible, and you could easily take the scenes of them shooting the breeze out of the film and have them as their own funny, Withnail & I-style road trip comedy.

These scenes largely act as ways of relieving the tension, which is pretty much constant, but in doing so they just make the film more volatile. Very early on in the story there is a dinner party attended by Jay, Shel, Gal and Gal's date Fiona (Emma Fryer) which veers suddenly and jarringly from funny and lighthearted to uncomfortable and threatening on multiple occasions. As well as being a very well executed scene, even if it does feel like it's been dropped in from Nil By Mouth, it plants the thought in the audiences' mind that this film can switch from fun to frightening in a heartbeat, so even the moments of levity are tinged with foreboding.

For all its good points, there is a real problem with Kill List, and unfortunately it's a problem that arises from the film's greatest strength; it's ambiguity. For the first two-thirds of the film, there is little sense of why Jay and Gal are on their mission, who they are working for, or who it is that they are killing. All we know of their victims are their professions, which are displayed in massive stark white letters (The Priest, The Librarian etc.) as jarring chapter headings. The lack of any clear definition gives the film a vaguely absurdist air, again, like the work of Pinter or Samuel Beckett. We don't really know what is going on or where the film is heading, and that uncertainty is terrifying.

In its third act, Kill List introduces an explanation, and once it does it loses a lot of its power. It still manages to get a few good shocks in along the way, but by resolving the mystery of the film, albeit in a way which is, in keeping with the rest of the film, pretty oblique, it detracts from what has gone before. It wasn't enough to ruin the film for me, because I still had a very good time watching the film up until that point, but my interest waned considerably once explanation was offered, and once it became apparent that explanation was pretty uninteresting. That doesn't mean that I didn't spend the first two-thirds of the film on edge, though.

Despite that glaring problem, Kill List is a superior genre offering. Suspenseful, brutal, funny and unnerving, it's a film that actively resists the idea of being an easy watch. It's one of the most genuinely unsettling films I've seen in a while, even if it ultimately fails to deliver a destination worthy of the journey.