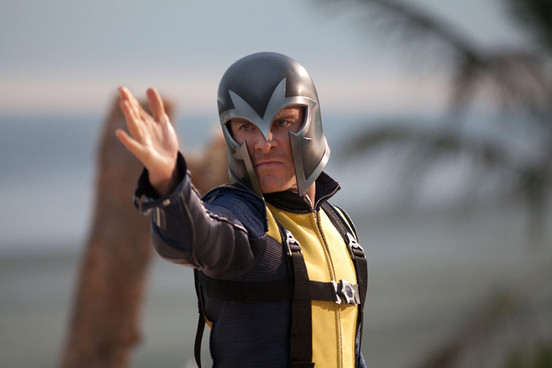 This review of X-Men: First Class is something of a departure for me since, for once, I have actually let myself sit and consider the film in question before writing about it. In fact, I've taken a whole week to mull it over before setting pen to paper (or whatever is the Internet-appropriate update of that idiom). This is not because I don't tend to put a lot of thought into my writing; far from it. But generally, due to work and other commitments, I don't get to attend press screenings, so if I want to review a film I have to see it at the cinema, and if I see it at the cinema, I have to get my review written quickly so as to make sure that I can get it online soon so as to not get left behind when everyone else posts theirs. The Internet favours expediency, so my ethos has always been that if you can't see a film early, then you should at least be able to offer up your thoughts quickly enough that it doesn't really matter.

With First Class, though, I knew that I would have to take some time with the film, because I didn't think that I could trust my gut reaction. Walking out of the cinema, I had some very positive feelings about the '60s-era prequel/reboot, but then again I had some pretty positive feelings walking out of X-Men: The Last Stand, too, a film which is not very good at all. The X-Men, particularly in the form of the '90s Saturday morning cartoon series, form a pretty big chunk of my childhood, and I have a bit of a blind spot when it comes to anything involving them. I wanted to let my rose-tinted affection subside so that I could really get down to answering the question of whether or not X-Men: First Class is a good movie or not. The conclusion I have reached is that it is a movie with enough great moments to make it entertaining, on average, but not enough to make up for some gaping flaws, thus stopping it from being genuinely good.

Director Matthew Vaughn made a big splash last year with his adaptation of Mark Millar's comic, Kick-Ass, largely for the wrong reasons. People focused on the swearing, the violence and the controversy that surrounded those aspects, and in doing so were blinded to the fact that Kick-Ass was, and remains, a vapid film with pretensions to being a searing commentary on the superhero genre. These were largely faults of the source material, but Vaughn did not do anything to make Kick-Ass a film that genuinely explored why people would ever want to be superheroes, instead just focusing on trying to make the film seem cool.

The same problem afflicts X-Men: First Class, except that superficiality feels outright insulting when applied to source material that actually has the potential for depth and insight. The X-Men franchise has always dealt with two incredibly profound subjects; prejudice and humanity. Its origins in the '60s mean that the parallels are easy to draw between the struggle between Charles Xavier (James McAvoy) and Magneto (Michael Fassbender) and the Civil Rights Movement, with their competing ideologies being analogous to those of Martin Luther King and Malcolm X. The great thing about The X-Men, though, is that their story can be a metaphor for any situation in which people are struggling for acceptance; Bryan Singer, director of the first two, and best, X-Men films pointedly used them as an analogy for gay rights. Vaughn and his co-writers nod towards this idea by having characters say the phrase "Mutant and proud" over and over, making subtext text in the most patronising way imaginable.

This filters into the main problem with the film: a lack of focus. When it follows a single character, namely Magneto, and his journey from concentration camp survivor to crusader to terrorist, it has a brio and weight to it that gets lost the rest of the time over its 132 minutes, during which it feels bloated and distended. As well as re-introducing characters established in previous films, and paying lip service to the fans with a host of inconsequential cameos, it feels the need to cram in as many new ones as possible, diluting its core cast with each new addition. The further it gets away from the central relationship between Xavier and Magneto, which it treats too offhandedly anyway, the less defined the characters seem to be. Characters like Mystique end up underwritten and underused, which leaves someone as formerly terrific as Jennifer Lawrence flailing in the breeze, delivering a flat, tone-deaf performance. A tighter focus or a smaller cast could have given the relationships that are meant to drive the story more depth than they end up having.

The film is set in 1962, but there is never any compelling reason for this to be so. Whilst the Cuban Missile Crisis is used as a backdrop for the largely terrific final showdown between Charles, Magneto and Sebastian Shaw (Kevin Bacon), the rest of the time it seems to be used purely as an opportunity to get Rose Byrne and January Jones in their underwear. Admittedly, there's not much else that January Jones is useful for, but it feels lazy and pandering to set the film in that time period, yet not engage with the aspects of the period (such as the Civil Rights Movement) that could be thematically relevant in favour of offering certificate-appropriate titillation to the audience, which Vaughn thinks must consist solely of pre-pubescent maladroits.

What makes the film even more frustrating is that there are times when it gets things right. The climax, in which the various characters are thrown together in one place and are forced to address their ideological differences, instead of avoiding them like they have for the rest of the movie, is great. It's dynamic, well-written and the film-makers seem to actually be engaging with the idea of two men who fundamentally want the same thing - a place in the world for mutants to exist - realising that their methods for achieving it are fundamentally irreconcilable. Likewise, the early scenes in which Magneto, before joining up with Xavier and his team, jets around the world killing Nazis, are exciting, not merely because they play out like a super-powered Bond movie, but because they deepen the world that has already been established. In these sequences, Vaughn gets so much right that it makes the mistakes throughout the rest of the film all the more glaring.

However, for a lot of people, this will be enough, because X-Men: First Class is a summer blockbuster before everything else. It has some great sequences, some decent performances, and it isn't outright terrible. But the problem isn't that it's a bad film, but that it isn't a better one.